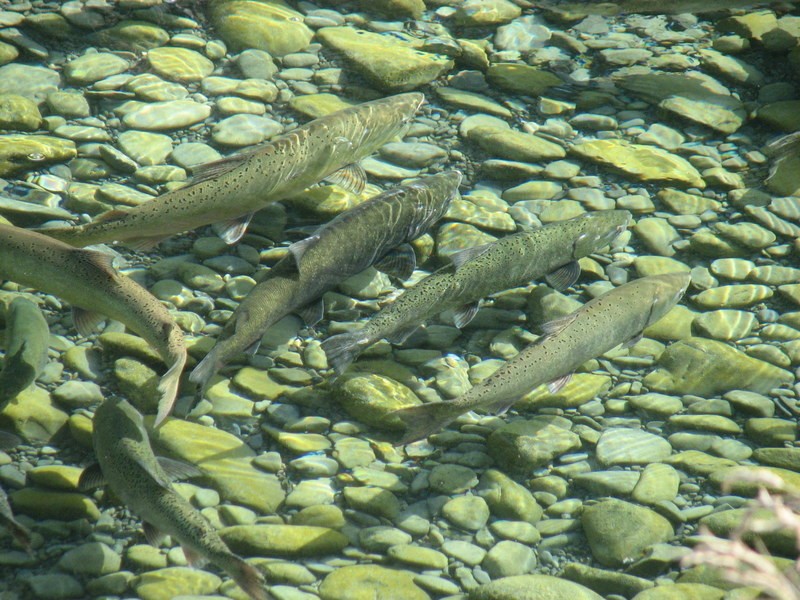 Dear Anglers, it looks like a good weekend for salmon anglers in the lower reaches of the main rivers.

High Country trout anglers should be aware that strong Nor-West winds are possible for Saturday, and all most definite for Sunday.

There is a Nor-West  front moving up the lower South Island from early Saturday and will be over Hokitika and the Canterbury High Country by early Sunday morning.

Above Right: Some Rakaia salmon on their journey upstream.

There is heavy rain forecast so be aware that the main snow fed rivers will rise, anglers should make the most of fishable conditions this weekend as rivers may start to rise Sunday afternoon.

Salmon anglers will be spoilt for choice this weekend, the Hurunui, Waiau , Waimakariri and Rakaia rivers are all producing Salmon success.

The lower reaches of all of these rivers will offer the best opportunity, the surf has been a bit messy since the last Southerly, but should settle by Saturday and maybe worth a look.

The pick of the rivers is probably the Rakaia at present, however this could change any day with the Waiau and Hurunui time clocks ticking.

The Waimakariri has also produced the odd salmon to date and is showing good promise for the weeks ahead.

Don’t forget to keep an eye out for the fin clipped salmon that will be making their way up the rivers soon.

If you do happen to catch a clipped fish, make a note of that, and have your information available for the annual phone survey which is carried out at the end of the season.

This information is important to accessing how well Enhancement Program releases are doing, and will also indicate how to help natural spawning populations by applying comparisons.

It seems the early run salmon are in great condition this season, they are certainly varied in size it seems with factual fish weighing up to 23 pound, and also as small as 5 pound.

Trout anglers should have good conditions over the next couple of days in the low country.

The old faithful Nor-Wester will be evident inland with Sunday looking quite strong.

However the High Country lakes should provide some good sport at this time of year, and a dry fly with a dropper nymph under it would be my choice of method.

This time of year can be very exciting dry fly fishing with more terrestrial insects coming onto the scene.

Manuka beetles, Cicadas, and Blow Fly imitations will be sought after by trout.

Searun trout fishing will also be a good option this weekend, there have been some very nice fish taken at the Waimakariri and Rakaia rivers this season.

On dusk is the best time to fish, especially if the river is getting clear, feathered lures work well with silvery type patterns being the most popular.

Hopes Silvery and Dark and Parsons Glory are my choice.

Unfortunately we have not had the results advised to us yet from the MPI lab in Lower Hutt.

The process is quite involved as cells have to cultured and it is a lengthy procedure.

As soon as the results are known anglers will be publicly notified, in the mean time the Waimakariri Lakes remained closed.

There seems to be a lot of unpleasant encounters between anglers on our salmon rivers this season, the reason for this maybe as simple as, there are a lot of new licence holders fishing for salmon this season.

Fish & Game has an Angler Code of Conduct you can refresh yourself with it here.

Remember the the rivers are public property, one of the most common causes of friction between anglers is the practice commonly known as hole jumping.

Jet boaters, you have the whole river and both sides of it for your use, no respected angler would pull in on water that is already being fished by walking, or vehicle anglers.

There are fishing holes on the river that are regarded as public holes, these are usually close to main public access points and are usually big long holes, or edges with plenty of fishable room for many anglers.

Then there are smaller holes in more obscure places that fall under the first in first served “river rule”.

These holes, or guts may only have a small part of the entire run where it is possible to hook a fish.

The salmon angler that knows this will not move from the hot spot which may only be a meter or two wide.

This angler will catch fish, others around wont, but their presence of casting and disturbing the water near them will affect their chances.

Their chances and your chances of a fish would be much better if you find another piece of water, and left them to their piece and peace.

Basically if you want that water, you will have to get out of bed a lot earlier next time.

When arriving at a well used and known fishing hole, that is already being fished, and someone else is on it, the polite thing to do is ask the angler if it is OK to fish upstream of them.

Never downstream of them, they deserve to present his lure to the fish first, as they were there first.

In my experience this system works pretty well, it has been in place since the good old days, and attracts quality sports anglers to our rivers where a  quality fishing experience can be had.

On the other hand, hole jumpers as they are often referred to, do nothing but create a horrible day for all.

Of course the above sporting conduct is more difficult at river mouths due to so many first time, or new salmon anglers often being present.

There are however many other unique to the mouth behaviours, which new anglers soon learn if broken due to the ever present and vocal local identities.

Most importantly when this sporting etiquette is used, anglers are most respected, and regarded as gentlemen anglers, or just plain “good sports” on the river!

Seasoned anglers have to lead by example - don’t show poor form - all of us need help on the river at times, broken boats and stuck cars etc.

The chances are pretty high that by making someone’s fishing experience an ugly one, that help may not be extended when needed.

There are new keen salmon anglers on the river this season, they don’t necessarily know the many “river rules”  and are probably very unsure of how it all goes.

Help them out a bit so everyone can have a nice day on the water, and enjoy the “sports fishery” with sporting anglers, for what it truly is.

Best of luck this weekend!