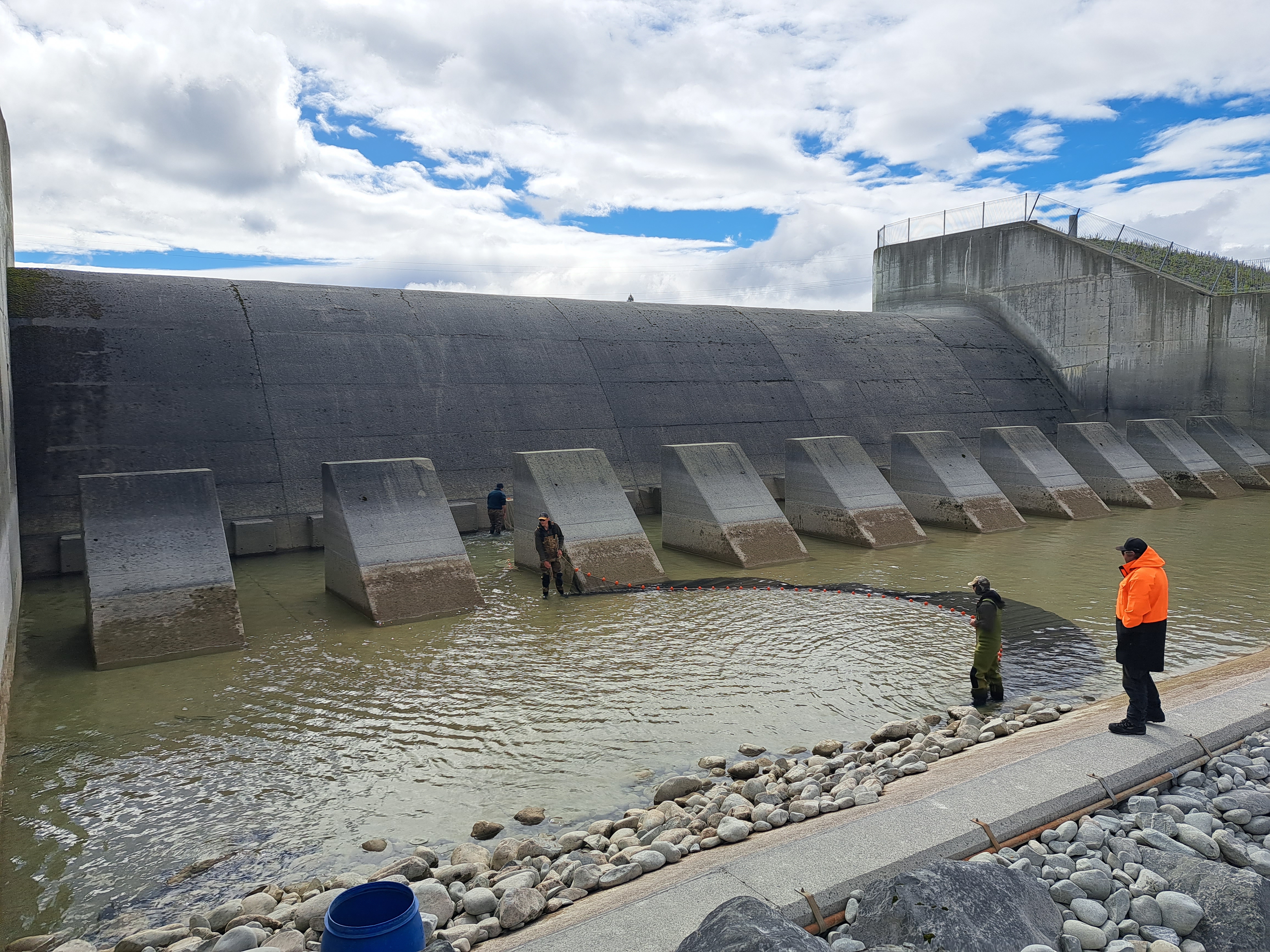 Tekapo Canal gets a top-up of trout

It’s been a busy week in the field for the CSI staff team, netting fish for research and relocation.

A wet spell in the Southern Alps led to high levels of Lake Takapō/ Tekapo, and as a result, Genesis was required to spill water into the river.

Above Right: coral nets are used to catch stranded trout in the Lake George Scott Weir for tagging and release into the Tekapo Canal-Photo by Nikki Dellaway

When spill flows ceased, Genesis and CSI Fish & Game set to work, pumping out the stilling basins (ponds) and relocating stranded trout at Gate 16 – the control gate in the Tekapo Township— and at the Lake George Scott Spill Weir.

The relocation was paired with our tagging project, and of the 297 trout relocated to the Tekapo Canal, 150 were tagged.

Our Tekapo Canal tagging project has been running for a couple of years now, and we have had some super interesting results so far – keep the reports coming please.

Most of the relocated fish were small, only 0.5-2 pounds, but we have learned that they grow phenomenally quickly if they travel down to the salmon farms and find a place high enough up the pecking order.

It won’t be long until some of these newly released fish are around 5 pounds and perfect for the table.

Given a couple of years or so, they can reach 20 pounds and be a ‘canal-trophy’.

If they stay at the top of the canal, where they are released, they grow slowly and resemble a typical 1-4 pound fish you may catch in Lake Takapō /Tekapo or Lake Opuha for example.

Please watch this YouTube video here of a previous relocation and tagging operation that shows how to identify the unique tag number and how to report your tagged fish catch.

We joined staff from ECan on Monday, seine netting the hapua/lagoons of the Orari and Opihi rivers as part of a wider project to identify Hapua fish communities and assess the current distribution of Stokell’s smelt.

Stokell’s are very hard to distinguish from common smelt, an experts-only task.

In terms of trout or salmon, none were caught in the nets – probably too fast swimming, although a couple of nice adult brown trout were spotted in the Orari.

During the holiday period, this road has increased traffic as anglers, boaties, and campers come and go from campgrounds like Ohau C, Falstone etc.

Anglers fishing the Ohau C Canal are asked to be extra vigilant with the way they park – do park well off the road and in designated parking areas, and do not park on yellow lines or in no-parking areas.

Crossing the road to get to the canal should be treated with the utmost caution, and parents should take extra care to support their kids to cross the road safely.

Keep an eye on the ECan river flows website and the general forecast, as there has been a fair bit of low-country rain lately and more rain in the forecast.

On Wednesday afternoon, the Opihi River was high and discoloured – the mainstem below Pleasant Point may take some time to clear, but I’d expect tributaries like the Temuka should clear up nicely for spin and worm fishing for the weekend.

There are so many waterways worth fishing in the region I’m sure you will find a good spot to fish in the lead-in to Christmas Day.

We are currently advertising for two new staff members to join the team at Central South Island Fish & Game.

'Tis the season for some great fishing! 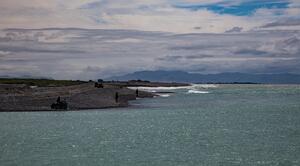 Angler check out the north side of the Rakaia River Mouth

North Canterbury anglers will have some great options for Christmas fishing in the coming days.

We have some of the best fishing options in the country, with everything from our big lakes, braided rivers and small streams offering something to tempt all anglers of different skill levels.

In recent weeks we've been out and about, and we've seen some great fish being caught and even seen others in places and numbers that surprised us.

With recent and frequent rain, our rivers and lakes are at good levels so will bode well for some holiday angling. 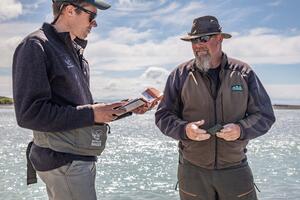 With the popularity of salmon angling at the moment in the Rakaia River, we've been down there doing a bit of ranging lately.

We've been using our jetboat to range the river sections that often don't get visited; we are also checking the usual spots of the mouth and the gorges.

A common issue is anglers not having their sea-run salmon harvest card on them, leaving it back in the car or at home, or only having a photo of it on their phone.

Unfortunately, that means you are effectively fishing without a licence, as it is a requirement of the sea-run salmon endorsement that you must have it on you so you can immediately fill it out after you decide to keep a salmon (Note 12.5 in the Anglers Notice in the North Canterbury regulations).

That also means you need to carry a pen to fill in your card as well.

Weather forecast for the weekend

Sunday is looking ok for a bit of fishing and probably the perfect opportunity to try out some of the new fishing gear you got that morning for Christmas.

However, don't forget to keep track of the time, as we don't want you late for any family Christmas lunches or dinners.

The rest of the next week is looking good, from Boxing Day close to the city for relaxing days fishing.

For those camping in the high country, the weather after Boxing Day should also provide quite a few opportunities for a fish.

Merry Christmas and Happy New Year to all our anglers from the Team at North Canterbury Fish & Game.