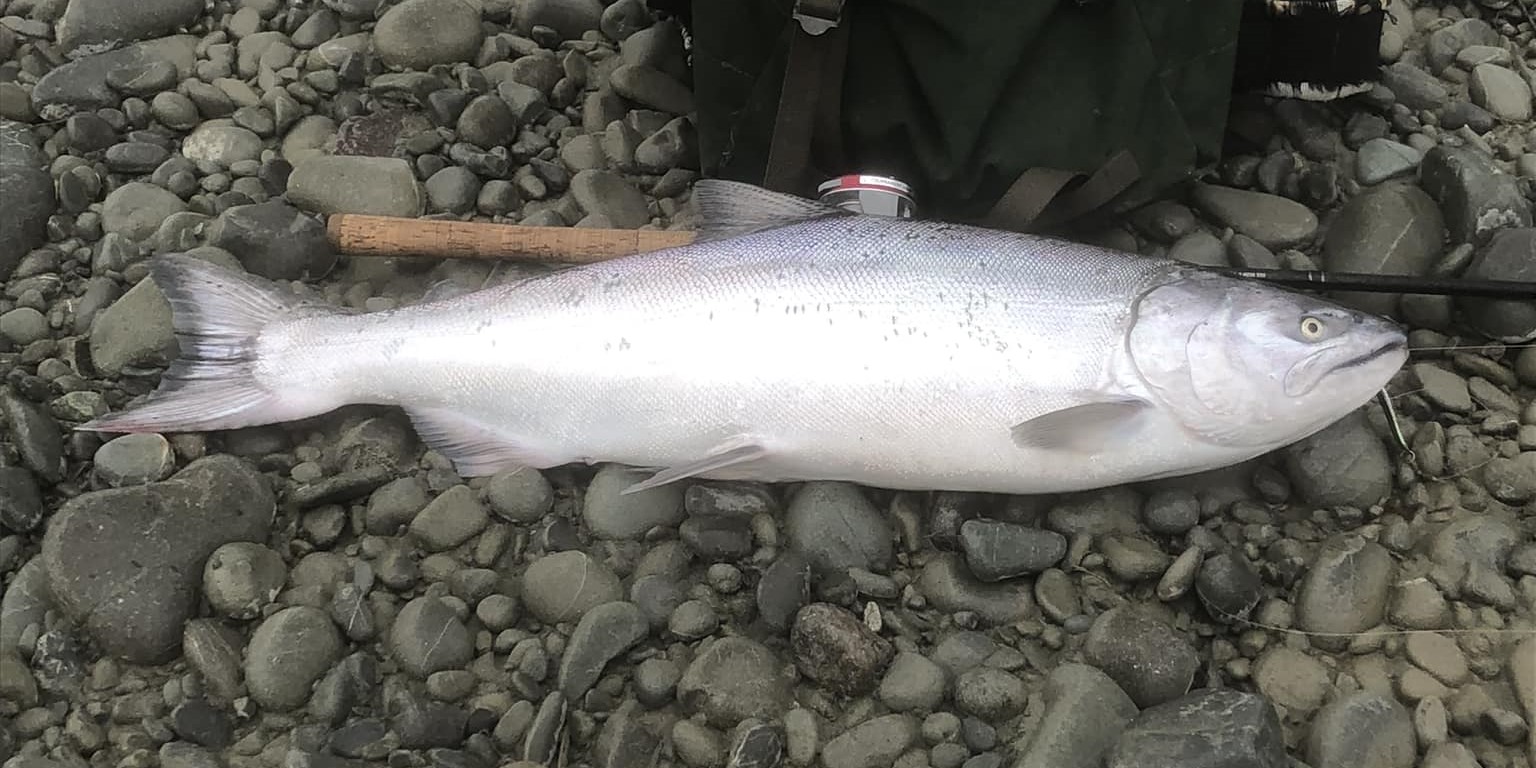 All bets were on for someone to catch the “first-of-the-season” sea-run salmon at the Rangitata or Rakaia rivers this week, as fishing conditions were perfect.

Ta-da! Bruce Wallace caught a salmon in the Rangitata on Wednesday; he may deserve the “first-of-the-season” honours for 2022/23.

Above Right: Bruce Wallace's Rangitata River salmon - possibly the first caught by anyone for the 2022-23 season - photo by Bruce Wallace.

As far as I spy on the Outdoor Access Livestream at the Rangitata mouth, not many anglers have been chasing salmon lately; that will surely change now with a confirmed catch.

Of course, river flows and clarity ultimately dictate if anglers will be fishing the river or not – and unfortunately, there is a modest dousing of rain forecast for the weekend in the headwaters that will probably cause the river to rise and discolour.

As for predicting fishing conditions in the Rangitata, every season, the silt-carrying dynamics of the river change, and we must recalibrate suitable fishing water clarity with flow levels at ECan’s flow recorder located at Klondyke.

On Monday, I was at the RDR fish screen bypass, which is just downstream of the flow recorder at Klondyke — it’s also a “new” river access option that was formed when the new fish screen was constructed last year.

The flow was reading 92 Cumecs, and the water clarity for targeting salmon while spin fishing was suitable and not far off perfect in my opinion – see photo.

When Bruce caught his 15-pound salmon on Wednesday, the river was at about 88 cumecs. 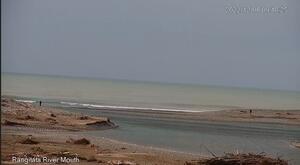 The more modern way to scout the flow and water clarity conditions is to subscribe to the Outdoor Access live streaming service with cameras on the Rangitata River at Klondyke and the mouth.

This regulation to obtain and carry the bag limit card applies within the Central South Island and North Canterbury Fish & Game Regions only.

On your bag limit card, you must write in the details of any sea-run salmon kept immediately; hence the need to carry a pen.

“Immediately” means on the riverbank then and there, before you carry on fishing or leave the riverbed etc.

For more information on how to obtain your bag limit card, what waterways it applies to, and the applicable regulations, click here.

The Chief Executive of the Central South Island Fish & Game, Jay Graybill, has announced his retirement after a long career with Fish & Game.

Jay has been in the role since 1991 after the former Acclimatisation Societies were merged to create twelve Fish & Game Regions.

Claire Allison from the Timaru Courier recently met with Jay to report on his announcement and career – click here the read the full story.

Gilled, gutted, with a frozen water bottle in a chilly-bag; a great way to preserve your catch’ flesh qualities’ Photo by Rhys Adams

Sports fish are a special food resource – there is no commercial market for trout or wild-caught salmon from New Zealand’s freshwater – only sports fishing licence holders like you and I have the privilege of harvesting wild sports fish in freshwater.

Here are the 4 key steps we recommend for getting the absolute best flavour and flesh texture from your special catch.

Step 1 – after landing, dispatch your fish asap with a firm strike to the top of the head above its eyes with a rock or stick, or an ‘iki’ spike to its brain.

Step 2 – Once dispatched, immediately bleed the fish by cutting from the bottom of its gills into its gills – when cut correctly there will be a lot of blood loss.

Step 3 – when bleeding has ceased, remove the gills, stomach contents and kidneys (dark strips along back bone in gut cavity).

Step 4 – Chill fish asap. Best done in chilly bin with ice. Alternatively, to keep it cool you may need to bury it deep in cold-wetted sand or keep it in the river water in the shade of a tree etc. 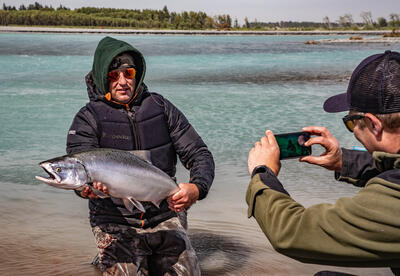 Simon McMillan gets a picture of Bryce Marshall with his keeper from this morning's fishing.

I can answer the question of who caught the first salmon of the season in the Rakaia - Bryce Marshall; he caught and kept a lovely salmon on Wednesday.

Fish & Game Officer Harry Graham-Samson and I joined Bryce and Simon McMillan early today to do some filming for a series of how-to salmon fishing videos that we'll be releasing in the coming weeks.

What followed next was some simply outstanding fishing; I was able to film four sea run salmon being caught over the period of a couple of hours.

Three fish were released (two by Bryce, one by Simon), and one more was kept by Bryce to fill in the last remaining gap in his salmon card. 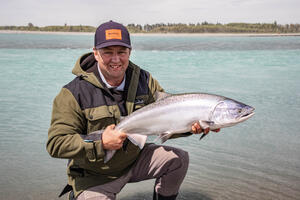 Simon McMillan with his first salmon of the season.

Never before in my career with Fish & Game have I been able to capture as many salmon being caught as what I filmed this morning; simply awesome!

Simon was able to update me with a report of a salmon caught in the Waimakariri on Tuesday, so with the Rakaia running and fish in the Rangitata, Salmon season is here!

The weather is looking like it will impact the big rivers over the weekend, so it may be a case of checking out our small streams close to the city.

We’ve been out doing some electric fishing training this week close to the city and have been pleasantly surprised by the number of fish around.

One small stream north of the city had six fish over three pounds in a 150 metres stretch!

So I can definitely say, there's fish out there!

Check out the Fish & Game YouTube channel; we have a bunch of helpful content on our channel for anglers of all ages and skill levels.

We have short videos on fishing tips for different waterways and longer-form videos like our “Introduction to Trout Fishing” series.

Anglers in the Lake Sumner area over the weekend were visited by Fish & Game Rangers, who were out in force over three days.

The Lake Sumner area is a premier fishing location in the North Canterbury region, so we try and check on compliance several times a season.

The fishery is one of the more remote parts of the region, so the anglers were harder to get to, but by using boats and regular vehicle patrolling with a bigger team, we were able to contact over 30 anglers over the weekend. 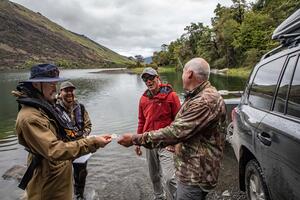 Richard Sinke, far right, has his Fishing Licence checked by Fish & Game Rangers Caleb Ryder, left, and Matthew Garrick, while his fishing companion Mike Menolascino looks on before they launch the boat into Loch Katrine.

We visited the rivers surrounding Lake Sumner, Taylor and Loch Katrine, the lakes themselves and walked into some of the more remote areas.

Though we haven’t targeted the area with as many Rangers in the past, the results from the weekend mean that we will replicate this technique in the coming months, combined with several lower-key visits over the summer.

The anglers reported plentiful numbers of fish in excellent condition, and the still, calm conditions on Saturday were perfect for fishing.

Mike Menolascino from Jackson Hole in Wyoming was fishing with Cantabrian Richard Sinke and raved about the condition of the fish in the upper Hurunui River.

Over five trophy-sized fish were caught and released by Menolascino on Saturday.

For a short time on Sunday morning, anglers at Lake Taylor were treated to a unique sight where around 20 trout had a feeding frenzy in the shallows as the strong nor wester wind forced insects onto the water for the trout to eat.

Canterbury anglers Richard Ballantyne and Martin Boyce battled these winds to try and catch one of the fish that were only a few metres off the lake edge.

They drew a crowd of mountain bikers watching their efforts in the testing conditions. 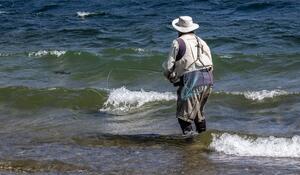 Richard Ballantyne tries to catch trout feasting on insects (black silhouette on the left-hand edge of frame) on the edge of Lake Taylor on Sunday.

The only offences detected were a couple of anglers not carrying their licences on them.

On that note, anglers are reminded it is a requirement for anglers to have their licence on them when fishing.

If you don’t have your licence on you when fishing, and especially if you don’t have any identification to prove who you say you are, don’t be surprised if the Ranger seizes your fishing gear.

We’ve had several instances lately where this has proven to be a wise course of action by the Ranger when the angler in question has later been found out not to have a valid licence.

If you are issued a Failure to Produce notice, you have seven days to provide your licence details to the Fish & Game Office listed on the offence notice.

If you attended the Lake Coleridge Competition, you may have had an invite to take part in our survey.

If you could take a couple of minutes to fill out our survey, that would be a great help.

Big thanks to all those anglers who have already taken part in the survey.

The Rakaia competition is the largest freshwater fishing competition in New Zealand, attracting over 700 entrants yearly. Also, next year will be the 40th anniversary of the first competition held in 1983.

If you have any recent photos of your fishing exploits or fishing events you want to publicise, send them to northcanterbury@fishandgame.org.nz ; even if they aren’t from our region, I’ll pass them on.