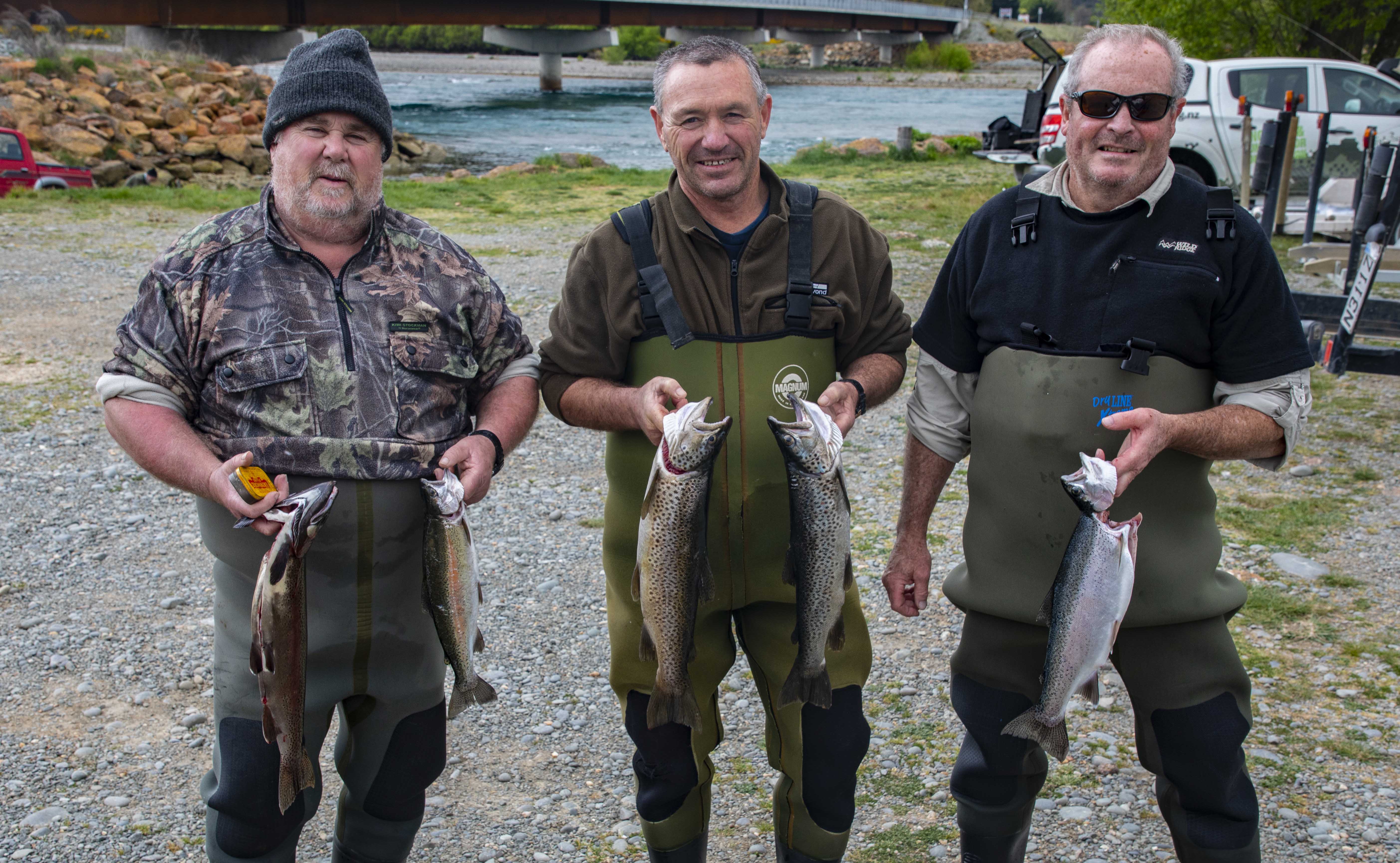 The river flows and weather forecast are looking decent for the coming weekend region-wide but don’t take my word for it.

For last weekend and opening day, the www.metvuw.com  and www.yr.no  forecasts I viewed were calling for a decent rain event of the main divide and a short sharp deluge in parts of our front country.

None of that really eventuated and most rivers stayed low.

That was in the most part a good thing though and there were opportunities to fish throughout the region on opening day. Its looking like river flows will be low for the coming weekend too.

In summary, check the forecast and river flows before you go and take my weather and river conditions advice as a general guide only.

I was ranging down at the Waitaki River around Kurow on opening day. Richie, our South Island Communications Adviser joined me for some ranging and he filmed a short clip of anglers enjoying the occasion, check it out at this link.

I have only fished that part of the river twice, so it was great to bump in to the “locals” and get some insight on their river fishery.

For the anglers it was certainly a mixed bag of results and some veterans of the fishery hadn’t landed a fish by lunchtime which was a real surprise to me. The section of river has a reputation for good catches.

The relatively low flows (200 cumecs) and clear water were thought to contribute to why they didn’t pluck a few out of their favourite spots like past openings.

Several anglers had landed between one and four fish for the morning and they were commonly a mix bag of browns and rainbows in the two to four pound class.

Another group of Dunedin-based anglers were stoked-as on their morning catching about four each by 10am, all on soft baits.

They said the browns were a bit slim, but the rainbows were in good condition and were fighting fit.

One angler got a surprise when gutting his brown trout, he found the head of a bird!

Trout are known as opportunistic feeders and this is the perfect example to back up the claim. How it came to eat the birds head will remain a mystery, there wasn’t any evidence of the body.

It was a strange looking bird with reasonably large head, I wondered if it was a chukar.

To my knowledge no tagged trout were caught on opening day on the Waitaki River. If you did catch one please report the details to our office, ph:03 6158400, email: csi@fishandgame.org.nz

With help from the Waitaki voluntary salmon hatchery Fish & Game have tagged hundreds of brown and rainbow trout in the lower Waitaki River fishery with yellow, numbered tags. Tags are found near the dorsal fin.

Please report any capture of tagged trout in the lower Waitaki River this season, and the Hakataramea and Maerewhenua rivers once they open on the first Saturday in November. 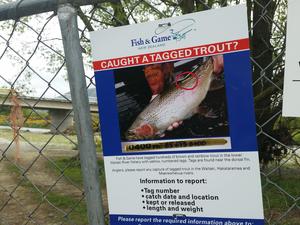 I was back down the Waitaki yesterday installing “caught a tagged trout signs” at popular access points.

It was good to see a few anglers out fishing midweek, mainly shore fishing around the SH1 bridge and jet boating from the Duntroon boat ramp.

I’m sure the river will get some use on the weekend too, being the first of the season.

Luckily there is plenty of room and plenty of fish.

On opening day Fish & Game Officer Hamish Stevens was ranging at the canals and the Upper Ohau River.

One of them was ecstatic landing a trout around 9 pounds.

Some of the others were a bit disappointed sighting their frustrations on low fish numbers and difficult river bank travel.

After completing many spawning surveys of the full length of the river I can support their claim; in places it’s a boulder strewn riverbed straddled by matagouri and rose hips with all their sharp wader-piercing thorns.

On top of that, we never encountered high number of trout in the river in October.

Hamish said the canals were relatively busy with anglers and put it down to school holidays in both New Zealand and Australia.

He ranged the Ohau A and Tekapo Canals and said he observed low catch rates and that the water was very clear.

Neither Hamish or I found anyone breaching the regulations on opening day.