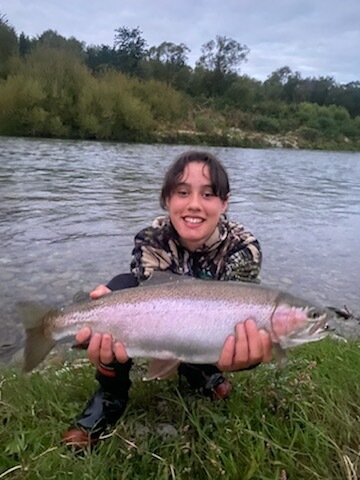 We have a rare but “consistent” catch report to share this week - an Opihi River rainbow trout.

How rare? Well, most locals haven't caught an Opihi River rainbow, although we hear of about one or two caught each season and mostly from the lower reaches.

Most Opihi rainbow trout are in the one to five pound range but this one was in the six to seven pound conversation and was released to grow bigger.

A more reliable spot to catch a rainbow trout would be the Ahuriri River delta at Lake Benmore.

It was great to confirm with the farm manager at Glenburn (Otamatapaio) last week that access provisions to drive to the lake edge parking area have returned for the historical “fisherman’s” access.

Recently the roadside gate on State Highway 83 was locked, and although walking access was still provided it extended the long walk to the Ahuriri delta and blocked a favourite vehicle-access spot to launch rowboats and kayaks in the sheltered top-end of the Ahuriri Arm.

We are assured the lock is off for good and would like to thank Mike King the manager at Glenburn and the owners of the Station for continuing to provide vehicle access across their private land for anglers to access the lake edge.

Next Wednesday, March 31st is the last day of the sea-run salmon fishing season in the CSI Region.

We would be grateful if any successful Waitaki River anglers could drop off their sea-run salmon heads and tail fins, frozen or fresh, to CSI Councillor Linn Koevoet in Glenavy.

Why do we want heads and tails?

We are again collecting samples for DNA analysis on behalf of the Winnemem Wintu tribe of the McCloud River, California.

New Zealand’s chinook salmon originate from the McCloud River and the Winnemem Wintu people wish to restore a salmon run to the river.

It is hoped that if our salmon still resemble those of the McCloud River, we will be able to help them restore their salmon run.

This morning I briefly caught up with Linn and Fish & Game Officer Hamish Stevens.

Linn said he knows of about 20 sea-run salmon caught in the Waitaki this season and caught a 17-pounder gilled and gutted himself.

Hamish was ranging at the Waitaki mouth this morning and checked on 18 salmon anglers fishing the high and discoloured river gut at about 500 cumecs of flow.

When the river is this high you are best to fish either the mouth or way upriver around Kurow.

Flows of around 350 cumecs are suitable for fishing the Waitaki River in general but flows of 250-300 cumecs are preferred.

Hamish said 18 anglers appeared to be a high number fishing the mouth for this season – boosted by a crew of North Canterbury anglers down for the last week of the season. 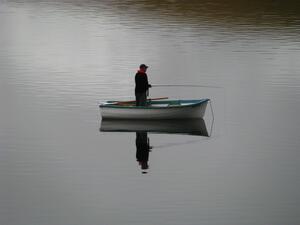 Finally, in this report – an idyllic photo from Lake Alexandrina to share.

Terry Denley got in touch to share the photo of his dad John, and he captioned it “in a moment’s solitude”.

John has been fishing Lake Alexandrina for nearly 70 years and on this occasion caught a nice 5.5-pound rainbow trout on a small woolly bugger.

2021 Game licences are on sale now at our Fish & Game website here.