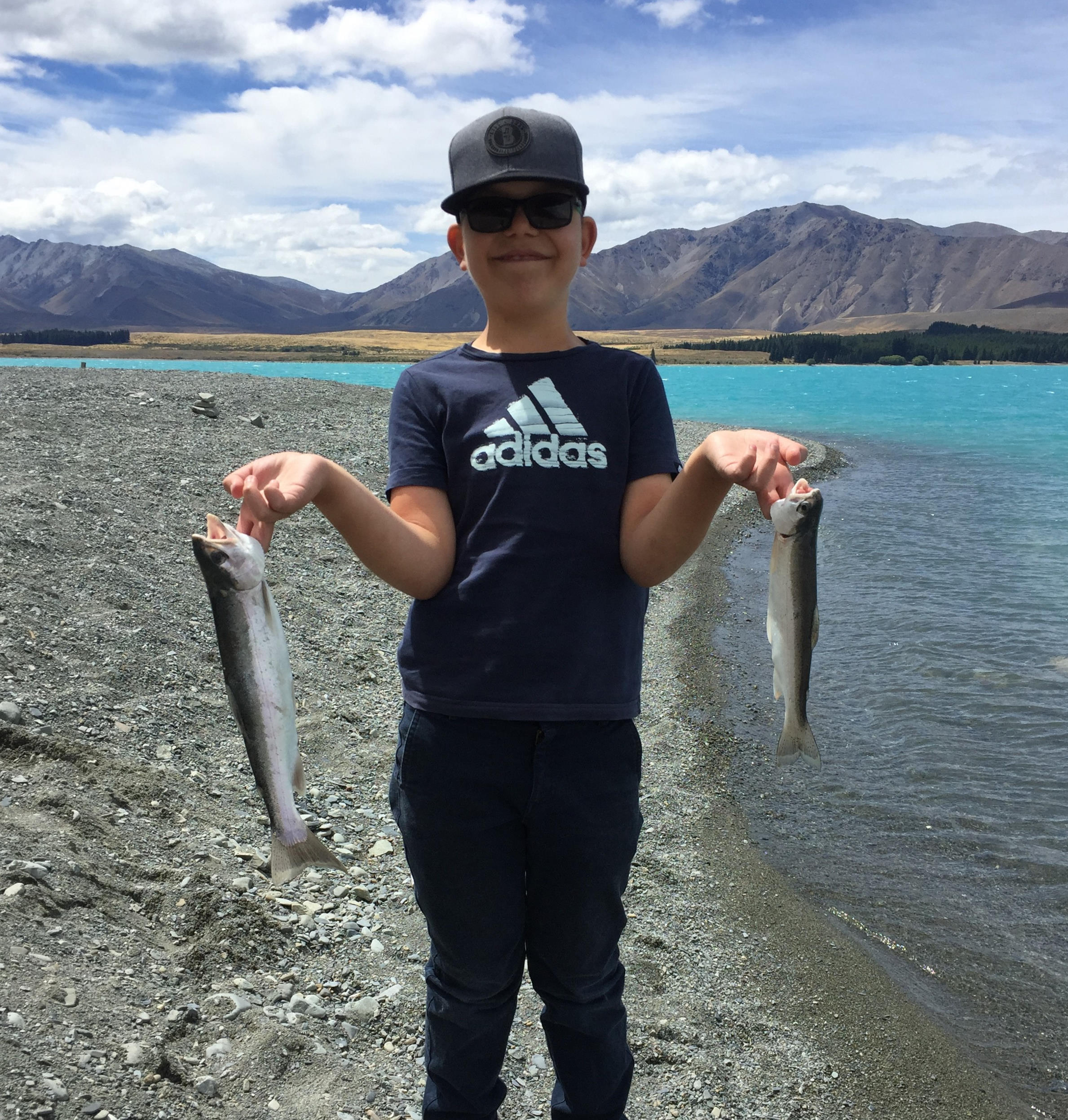 Our rod giveaway for junior anglers was a success.

By 11am the next day all rods were accounted for.

And It did not take long until at least one rod was back on the water doing its best work!

Above: Luke Green succeeded in catching his first and second ever trout at Lake Tekapo with his new rod gifted from Fish & Game - credit Simon Green.

Nine-year-old Luke Green picked up a rod after his rod was misplaced on a recent fishing trip.

When Luke and his dad Simon stopped by the office to collect the rod, I gave them some tips for fishing the Lake Tekapo shoreline with shrimp for bait.

It was awesome to hear back that advice was sound and that Luke was successful at catching his first and second-ever trout! 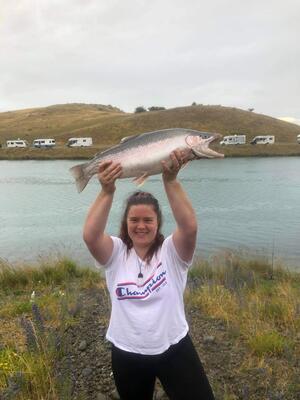 My request for stories to share from the readers of this report last week was actioned by Kayla Holland.

Kayla landed a 13-pound rainbow trout on the 7th of January.

By the looks of the photo, it was near the Ohau B Canal caravan park and the fish was big enough to fit a caravan in its gob!

The successful method was “shrimp, hook, float and sinker and a lot of patience”.

Kayla reckoned the catch was memorable because, “as soon as we netted and landed him the line snapped, so it was good fortune.”

After returning to her Lake Aviemore camping ground the catch caused a bit of a stir being the biggest trout many of the neighboring campers had ever seen.

Kayla said it was a laugh because, “A lot of little kids asked their parents to take them to the canals to try catch their own big one!”

That’s the third readers story shared in a row of a good rainbow from the Ohau B – Lake Ruataniwha area, must be something in the water there…

If you are looking to catch canal salmon, the Tekapo Canal around the farms has been the spot this last few weeks and reports are that the occasional one has been caught there this week too.

Sea-run salmon anglers know well that February is a good month for salmon fishing, and they will know that the runs of recent years have not been that flash.

In fact, Fish & Game have sought to introduce a season bag limit for sea-run salmon across North Canterbury and the Central South Island regions in an attempt to ensure sufficient stocks make it to the headwater spawning grounds.

The aim being to limit total seasonal sea-run salmon harvest as opposed to the standard daily bag limits we use across our fishery. 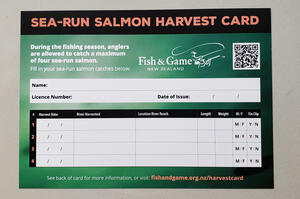 It’s hoped that Cabinet will sign off on the season bag proposal and it be introduced next season.

In the meantime, we have designed a “harvest card” and it is now available to trial at the river.

The harvest card is the place where you must record each sea-run salmon you harvest and at the end of the season it must be provided to Fish & Game for harvest monitoring.

If you are interested in field trialling the card this season you can source one from our CSI Fish & Game Temuka Office in Temuka or from these salmon management enthusiasts:

Please leave your contact details at the time you pick-up the card as we intend to get in touch with a few anglers to seek feedback on how the user-friendly the card was.

We have had more rain this week and even a good dusting of snow up high.

The Ahuriri and Rangitata river are up and dirty but are dropping fast, but, a weak westerly front may top-up flows again this weekend in the main divide headwaters so keep and eye on the ECan flows website.

Further East in the high country the weather should be light rain or overcast with strong winds that boaties should pay attention to.

Low country areas should be fine but windy this weekend – probably the pick of areas to fish overall.

Mid and low country rivers only benefited from more rain and in the main part the rivers are in excellent condition for summertime.

I understand Lake Aviemore from about Parson Rock to the Dam and Waitaki Lake and River are still holding colour from the January 2nd flood waters.