Get yourself ready for a great late summer fishing trip this weekend as conditions are looking favourable.

Region-wide rain earlier in the week gave many of our waterways a nice top-up in flow and took the edge off summer water temps.

This weekend air temps will be mild, expect both sun and overcast and even the chance of some light rain showers.

Not the blistering heat that cicada fishing enthusiast will be asking for in February but at this time of year just try your cicada fly anyway as trout tend to be ‘looking up’ regardless of the weather.

Nearly all CSI rivers and streams will be in fishable condition this weekend.

The only uncertainty is around Southern Alps rivers that are affected by silt from slips and glaciers.

For example, the Rangitata River on Thursday morning still held a glacial grey colour at 107 cumecs as seen on the Outdoor Access live stream.

The Rangitata River was at a summer low-flow of 57 cumecs before this week’s rain so you could anticipate the flow will drop quick and clarity will clear up – hopefully by Saturday if not Sunday.

The mouth is positioned in front of the north side hut currently so it’s a long walk from the south huts. 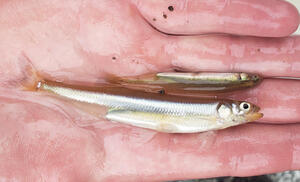 CSI staff joined North Canterbury Fish & Game Staff and those from DOC and ECan this week to sample the fish life at the Rangitata Hapua (Lagoon).

With seine and fyke nets and G-minnow traps we caught many inanga, bullies, smelt, mullet, eels and one salmon smolt.

The catch data is now in the hands of ECan scientist to assess how the catch compares to a similar study completed in the 1980’s.

One angler hooked and lost a salmon while we were there but other than that it was kahawai and even large yellow-eyed mullet putting bends in rods.

The Lake Camp fishery received a boost recently with the release of 7,000 juvenile rainbow trout.

Due to poor spawning recruitment, options to maintain the Lake Camp rainbow trout fishery into the future are being investigated with one of these being a regular stocking program. 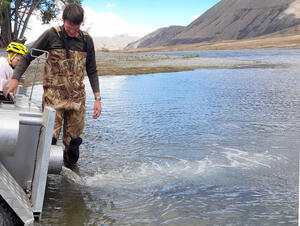 Sporadic stocking in the past has produced trout to the anglers bag and we hope this release will do the same.

Sam Coskerie and Carter Henwood (both from Temuka) were excited to see the new additions to the lake as they had only been able to muster a few perch while fishing there over the school holidays.

They may have to wait a while though as they will need to put on the pounds before featuring on the dinner menu, perhaps in the 2023 season.

Big thanks to Otago Fish & Game Region for making stocking Lake Camp possible and to young Sam for his skills behind the camera.

ECan are planning to undertake riverbed weed spraying for flood management from mid-February to mid-March at these rivers: Waitaki, Pukaki, Tekapo and Ohau.

The spraying will be helicopter and ground based and signage will be in place during operation, for more information contact Sam Kidner 0273044255