Anglers are gearing up to target some of New Zealand’s “biggest wild trout” as some renown Rotorua streams open for summer. 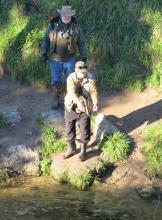 Popular Lake Rotorua tributaries which have been closed for the spawning season re-open for summer angling from Thursday December 1, 2016.

Right: Casting into the Ngongotaha Stream.

Fish & Game Officer Matt Osborne says the streams are closed from the end of June to the beginning of December annually, to protect important wild spawning habitat.

He says that while Fish & Game re-stocks other lakes in the district, Lake Rotorua doesn’t have the same need as lots of streams that feed into it provide gravelly beds and ideal habitat for natural spawning.

“We restock Tarawera, Okataina and Rotoiti lakes with thousands of hatchery reared fingerlings every year – for the simple reason that they provide pretty limited spawning habitat by comparison with Lake Rotorua which does well without our help.”

Fish & Game does release a small number of tagged trout into Lake Rotorua, but only for monitoring purposes, he adds.

Mr Osborne says that there are some positive indicators ahead of the 1 December opening.

“Brown trout are already beginning to move into the tributaries, an annual exodus that happens when the lake gets to around 19o C, and drives them into the streams in search of cooler water.

“We are already seeing these fish showing up in our fish trap on the Ngongotaha Stream that we use to monitor fish movement.

Ben Todd with a solid brownie.

“As always, the weather can be a bit of a rogue factor, and anglers will be hoping for some rather more stable weather when the streams reopen than we’ve recently been having.”

Mr Osborne says that browns from the Ngongotaha Stream can offer what one fishing website calls “some of the biggest wild trout to be found in the country…that can test the ability of the very best anglers.”

Most experienced anglers will initially be nymphing or using globugs before moving later in summer to caddis and cicada-type dry flies and emerging type nymphs, he says.

But he adds that while some areas are fly fishing only, there is scope to spin fish on some streams. “Please do check your regulation booklet for where you can spin first though.”

Fish & Game says that anglers who take advantage of the change of light and fish the streams in the early morning or late evening usually have the most success.

Fish & Game officers will be out ranging at the opening of the Rotorua streams, and in the weeks that follow, speaking to as many anglers as possible.

Towards the East Coast, the Mokau and Hopuruahine streams at Waikaremoana will also be opening from December 1. Mr Osborne says Fish & Game’s monitoring of these streams through the winter period has highlighted good fish numbers present, and healthy size and condition.

Anglers are reminded of the need to Check, Clean and Dry fishing equipment including footwear when moving between waterways. “We hope this becomes an ingrained habit with anglers if we are to stop the spread of aquatic pests,” says Mr Osborne.

Anglers with any questions about the streams that are opening are urged to contact Fish & Game.