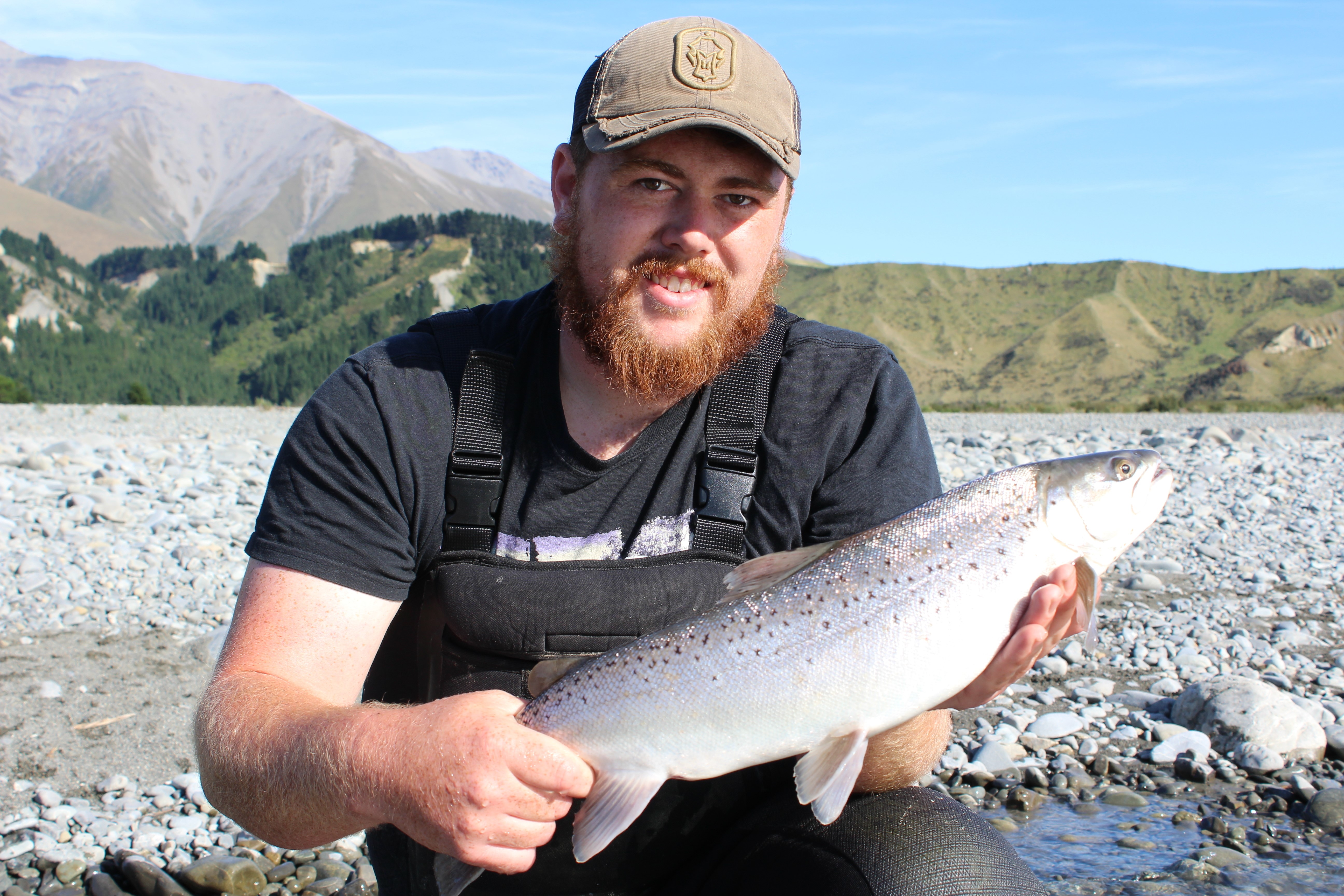 Dear Anglers, the weekends forecast is a shocker for inland parts of the region.

Nor-west winds are forecast to rise to 130 kms “gale force” on Saturday morning.

Above Right: Ryton Barr, with a nice silver brown trout caught in the Rakaia river.

It is also possible that rain will spill over from the main divide where heavy falls are expected.

Sundays forecast is not much better, how often does this happen on the High Country opening!

Most main stem rivers are fishable at this stage, but I would be seriously keeping an eye on the ECAN river flow website for up to date flows.

There is a small fresh on its way down the Waimak at present.

The Kowai, and Broken river catchments were affected by the southerly rain a couple of days ago.

This should clear off reasonably quickly, however there is potential for even bigger flows coming down the main river catchments during this weekend.

Be aware that the river situation can change dramatically very quickly throughout the entire catchment from the mountains to the sea.

Many local streams have also risen substantially over the past couple of days.

For example the Ashley river had risen to over 60 cumecs yesterday.

Despite being down to half that at the time of writing, it will still take a few days to clear.

The forecast for the lowland is reasonable this weekend.

Options are a little limited due to the past southerly rain.

The best options for fishability will be main stem rivers in the lower reaches, before rain in the headwaters makes its way down stream.

Typically anglers can get most of the day in after heavy rain in the Alps, before colour arrives in the low land.

With the forecast at present, Saturday will be the best option for fishable conditions.

If you are there when the river colours up, get out quickly, is the best option.

For those of you heading for the High Country for the historic first Saturday in November opening day, be prepared!

This day signifies the start of the main fishing season in which almost all rivers and lakes are open to fishing.

The exceptions to this are the Western Zone Rivers that flow into Lake Coleridge.

Anglers are reminded that these rivers open on the 1st of December in order to protect the late spawning rainbow trout.

Coleridge will be rough, other lakes will offer some sheltered areas to fish which will be the best option for fly anglers.

In general spin anglers will have more opportunities open to them this weekend.

After no angling pressure in most of the High Country lakes during the winter, prospects are good for all for catching trout this weekend.

Our rangers are out in force, but we always appreciate your reports of illegal angling activity.

If you do come across anyone illegally fishing please contact Fish and Game on 03 366 9191 as soon as possible with details such as registration plate numbers, and we will follow up immediately.

Chances of searun trout success will be good.

Although Lake Ellesmere is closed to the sea there will be reasonable out flows from its tributaries after this week’s rain.

It is the current that often makes for good fishing as trout have to make an instant decision as to take, or not.

Some good fish have been caught to date, and there is still plenty of potential for trout action during November, a favoured month by many anglers.

Feathered lures such as Woolly Buggers, Mrs Simpson, Hopes Silvery, and soft baits are a good tackle choice as they closely resemble, bullies, smelt and whitebait, which the trout are feeding on at this time of year.

There are still some good opportunities for the kids of catching a fish at the Groynes.

The best time for success is the last hour before dark.

Soft baits and bait fishing with worms should work well.

Spinners such as veltics can also work around dusk. 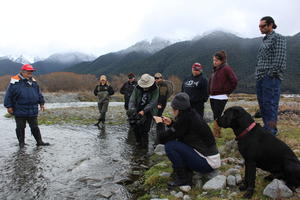 Winnemem Wintu Chief Caleen Sisk and team paying respect to a late spawning Chinook in the Waimak Catchment during the Winter.

Part two of the Winnemem Wintu tribe Genetic Sampling project is for the collection of samples from three lakes which hold Chinook salmon in the land locked, and juvenile rearing form.

We are required to gather fin snips from Chinook which inhabit these lakes in the Central South Island and North Canterbury regions.

Lake Heron, Coleridge and Sumner have been chosen.

The first three weeks of the High Country opening the sampling team will be collecting samples, mainly from angler harvested fish.

Just a small snip from the pectoral fin is required.

We are asking anglers to support this project by helping out with this.

If you are met by the team your support would be much appreciated.

To celebrate the traditional opening of the high country fishing season Fish and Game are holding the annual Lake Coleridge Fishing Competition based at Ryton Bay.

This competition is not only open to Lake Coleridge, it includes all of the Coleridge area lakes, and it is free to enter.

Fish and Game rangers will be manning a sausage sizzle for anglers during the day at the Ryton Bay which is also the base and weigh station for this competition.

The weigh station is open from 9 am until 1 pm and the prize giving will follow shortly after.

The competition is generously sponsored by Hunting and Fishing Tower Junction whom have donated some amazing prizes this year.

We thank them for their generous support.

The Ryton Bay paddock is open to camping for the first two weekends of the season.

This is thanks to the goodwill of the land owner from Glenthorne Station.

Please respect this privilege by acting responsibly at all times.

Keep everything tidy, No rubbish, fires, or dogs on the land that anglers have been very generously gifted the use of.

Good luck to all this weekend!