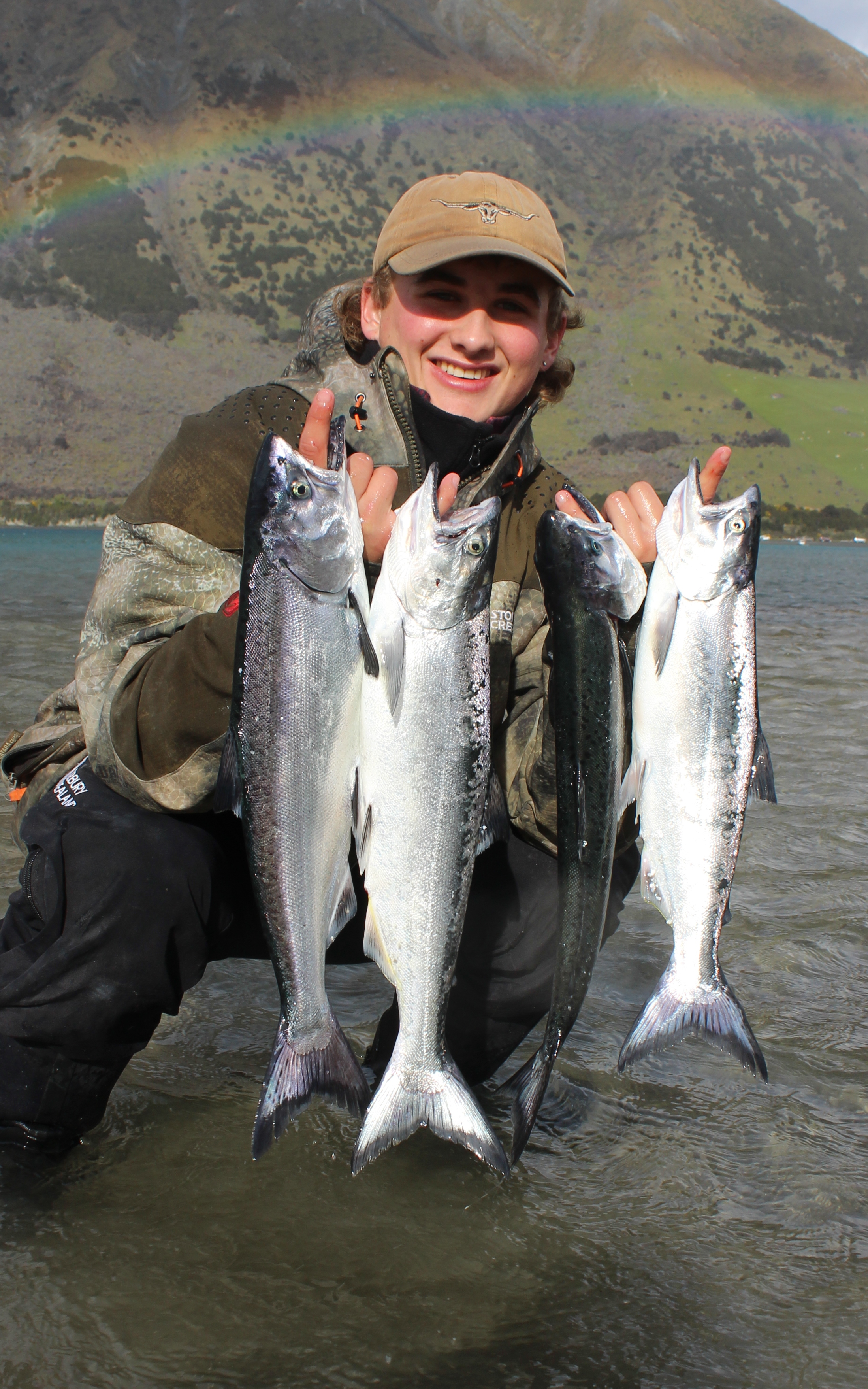 Dear Anglers, The weekends forecast is looking pretty good for anglers, from the inland to the coastal parts of the region.

The main snow fed catchments are starting to come right after the massive floods 10 days ago and should be close to fishable this weekend.

Above RIght: Cameron Bradshaw with a limit bag of beautiful land locked salmon at Lake Coleridge.

These increased flow levels will provide good angling opportunity as they clear to fishable.

Due to the unpredictable and unseasonal weather patterns recently, I would advise anglers to take any chance of fishability they can, the windows maybe small this side of xmas.

This is truly an exciting time of the year for anglers as there are so many options available.

All fisheries are now open to fishing with the exception of the rivers that flow into Lake Coleridge, and Winding Creek.

The lake Coleridge tributaries open on the 1st of December.

The reason for this is to protect late spawning rainbow trout in the area.

Winding Creek is private property, and an agreed opening date has been determined as the 10th of December.

This is due to stock lambing at this time. For access information to Winding Creek anglers need to contact Flock Hill Lodge.

Angling prospects are exceptionally good all round at this time of year.

There are reports of good sea run trout being caught in the Hurunui at present, and as the larger rivers clear they will also offer good potential.

Ellesmere streams are flowing high at present, this may determine a lake opening soon, as the level is now near the opening trigger point of 1.05 meters at Taumutu.

This will encourage trout to become more active in the current lines that the bait fish follow to the tributaries.

Smelt and whitebait have been about in good numbers prior to the last floods, so trout will be putting on good condition.

Hopefully we see continued good runs of smelt, or silveries, over the next few weeks.

These fish are a very important part of the river delta food chain.

The High Country lakes are fishing very well this season, any of the inland lakes will be a good option this weekend. 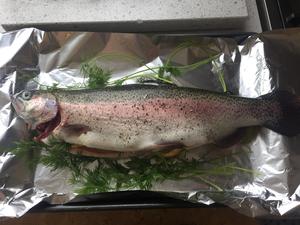 A nice Lake Georgina rainbow trout being prepared for the oven.

In saying that keep in mind that there are bite times that are unpredictable in all fisheries.

The key is to be there long enough to allow a bite time to occur, I have seen it this season at the lakes when the expected early morning success was non existent, and then at 10.30am everyone caught fish for half an hour.

Lake Coleridge is  producing very well, some very nice rainbow trout and landlocked salmon, have been caught by many anglers, both shore based and trolling.

It is pleasing to hear angler reports that the salmon are reaching some very respectable weights up there this season, with the largest weighing in at around 1.5 kgs.

About half of the salmon caught are fin clipped which has certainly boosted the anglers success.

Early morning and dusk are usually the best times to fish but as I stated, bite times can happen anytime.

Heavy silver lures with a long cast into the deep can be productive.

Cast and count depending on your lure weight, for example, let your lure sink after casting, before retrieving.

Maybe a count to five will get your lure into the right zone.

This all depends on the depth of course, but it is really worth experimenting with this method.

The trout and salmon in Lake Coleridge are a prized catch with their bright silver mirror like appearance.

They look fantastic in a photo for those looking to catch and release, and they are also a very high quality table fish for those whom like to take the odd one home. It is common that the 3 species of sports fish in this lake can all look bright silver.

It has been evident this season that some anglers are not identifying their catch.

It is the responsibility of anglers to make sure they get this right, as they may find themselves in breach of the limit bag regulations.

Just because a fish is silver does not mean it is a salmon!

There are 3 main ways of identifying your catch.

It is important to note that the Coleridge brown trout pictured here was bright silver before it was dispatched, and did not colour to brown until later.

Many of the rainbow trout caught in Lake Coleridge stay bright silver, and have no sign of a rainbow colour through the flanks.

There is also a concern expressed from Rangers inspecting catches in the area this season.

This means that an angler could have 4 salmon and 0 trout, or 3 salmon and 1 trout, or 2 trout and 2 salmon, as a maximum limit bag for the day.

It does not mean that an angler can take 4 salmon and 2 trout, which totals 6 sports fish.

Taking more sports fish than the daily limit bag is a serious offence and is treated as such by Fish and Game.

It is the anglers responsibility to make him or herself familiar with the regulations of the area they intend to fish, and they should do that prior to going to any waterway. A couple of forked tail landlocks from Coleridge.

Unconfirmed sightings of salmon in the Waimakariri river, and slightly more reliable rumors of one or two being seen by whitebaiters in the Rakaia river.

The timing is right in the Rakaia for the first salmon to be caught now.

The river is getting close to being perfect and I suspect that a confirmed report of salmon being not only seen, but landed will happen over the next few days.

Now that’s going right out on a limb so go get em!

The start of the annual salmon run is a highly anticipated event.

For many years it has been noticeable that some of our rivers have peak runs during different parts of the seven month “salmon present” season.

This variability is an important natural insurance policy for the species.

Some seasons it seems apparent that some of these variable run times fare better than others.

It is purely speculation in New Zealand at this point of time that, for example that, salmon running in November, are of different genetic make up to those running in March.

However tendencies such as these in northern chinook runs around the world have led to the discovery, and identification of different genetic traits.

It is possible that we have more than one of these runs here in New Zealand.

The reality is that we don’t know what runs we have, as that was not determined when they arrived from the Baird Hatchery in California over 100 years ago.

Coincidently as you will have read in previous reports, we are currently searching for winter run genetics with in New Zealand chinook runs.

The purpose of this is to hopefully help out the Winnemem Wintu tribe restore Winter run Chinook back to their river of origin, the McCloud river, a tributary of the Sacramento river.

This Chinook run was lost 70 years ago due to the construction of a dam.

Fish and Game are now researching into the make up of our Chinook here in the hope that a deeper understanding may offer more lateral ideas as to the future enhancement and protection of our beloved Chinook.

The first step is sampling, this involves removing a little bone in the ear of chinook called an otolith.

The bone is similar to a little fingernail and a holds very important information such as which stream it came from, how long it was in that stream and at what age did it migrate downstream to the sea.

DNA can also be taken from these samples to determine which run status they are ie spring or fall.

Fish & Game need your help and would like anglers to keep any salmon heads they catch in the Rakaia River in Nov/Dec, recording the date and location caught, weight, length and sex of the salmon.

If you are successful during this early part of the season, in the Rakaia river, please bag and freeze these heads then,

Contact Steve Terry at sterry@fishandgame.org.nz or phone 021 2218325 and we will collect these heads and the information from you.

Hatchery staff are anticipating depleted diluted oxygen levels before Christmas. In an effort to avoid releasing non marked smolt we will be attempting to fin clip half a third of the release stocks this December, and the other half in February 2019.

The Annual Chinook Salmon Smolt fin clipping program will commence at the Montrose hatchery at 8.30am Saturday and Sunday and will probably involve two partial days clipping finishing around 2pm with a good team both days.

An indication of numbers from the clubs, or members of the public prior to the weekend would be appreciated.