At the time of writing the Rakaia River is flowing at 286 cumecs after peaking at 400 yesterday, and the Waimakariri River has risen overnight from 79 at Otarama to 112 cumecs.

Above Right: A salmon release, note the angler supporting the fish in gentle current until it regains its strength.

The Hurunui River has showed little change and is currently at 33 at Mandamus, this will offer the best chance of fishability this weekend.

The forecast for the Canterbury High Country and Arthurs Pass is relatively good for Saturday and most of Sunday, however the wind direction will be moderate Nor West on Saturday, and calm conditions are forecast for Sunday.

Another front threatens heavy rain in the Alps by Tuesday evening.

Trout angling conditions will be better than for those targeting salmon this weekend, with the exception of surf casting possibilities.

The northern river mouths will should start to show signs of salmon now if conditions are right.

So far to date anglers have been blessed with pretty good weather and river conditions allowing plenty of angling opportunity this season.

A hint of what we  are normally used to turned up this week, with our old friend the Nor-wester making a return, and this on the back of inland northerly rain last week has kept the rivers dirty for over a week.

Just as they were coming right and getting close, the main snow fed rivers are on the rise again.

Its not all bad, the long period of fishable conditions will give fish in the river a rest from anglers, and many salmon will have now migrated through into the Western Zone, where they can not be targeted.

It is pleasing to know that we have a total salmon sanctuary in our Western Zones, at least we can assure that these stocks are safe.

They have survived all the trials of vulnerability from ova to alivens, to smolt, and the downstream migration.

Then endured 3 years of predation issues at sea, and the thousands of tempting looking silver things in their river, that they chose to pass on, in order to get home safely.

They deserve to be left in peace to procreate, and fulfill their ultimate goal, to find a mate and spawn in our special salmon sanctuary.

With the exception of the Waimakariri Lakes which are still closed, all other  High Country Lakes are worth a look this weekend. 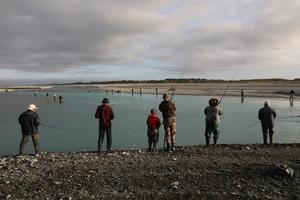 Sunday will be the best day of the two with light winds forecast.

Left: Rakaia River anglers at the mouth in 2017.

Sea run trout options in the main rivers will be limited this weekend as the flows will probably be too high.

There is some hope that clarity may improve quickly this time, however it is still a slim chance.

Keep a close eye on flows,  as soon as its fishable it is really worth a look.

Some anglers report that it is the best fishing they have had for years.

There is even the occasional trophy trout among them.

The rivers are usually trout fishable a day or two before they are termed salmon fishable.

Trout  have the ability to see feed in very discoloured water, or maybe they can sense the movement.

Silvery’s often run in these discoloured conditions, and the Sea Runs are usually not far behind them.

After discussions with the Ministry for Primary industries lab we are hopeful we will have a confirmed diagnosis around the end of next week from them, which will then enable us to plan a way forward.

We are very thankful for the support of anglers during the last two months, and would like to thank you all again for your support.

Keep an eye out for tagged trout or fin clipped trout that have been released into the Rakaia River.

They may turn up anywhere? Many of these trout have been caught by anglers to date and they have started to venture a lot further than their original release site.

There have been a few caught this season, however some anglers are reporting that the tags are missing in some cases.

Others caught still have 2 tags it pays to have a close look at any trout you catch in case.

If there are no tags, the adipose fin is also cut for identification.

In this case make a note of the condition and approximate weight of the trout and report the details to Fish and Game.

The tag numbers are important if they are still in place, and a landing net is recommended so that the trout can be secured without harm whilst the number is recorded.

Release the trout if possible and provide the information to (northcanterbury@fishandgame.org.nz) this information will be very valuable in regards to implementing future trout enhancement programs.

All anglers providing this information will go into a special prize draw at the end of this season.

All releases are on hold due to the Canterbury lakes Investigation, as soon as the all clear is given there will be a large release of salmon in to the lakes

Hatchery staff are already juggling stocks and flows attempting to hold oxygen levels in an effort to avoid having to release non-marked smolt which are smaller than recommended, and not traceable in our fishery.

Part Two of the Annual Chinook Salmon Smolt fin clipping program will take place at the Montrose hatchery at 8.30am Saturday the 17th of February and will involve 2 days with a good team finishing on Sunday.

These smolt stocks are destined for release into Silver Stream, Otukaikino, Rakaia, Coleridge, Kaikoura, Clarence, and the West Coast in July.

So invite your friends and children to enjoy the comradarie of anglers on this social and educational outing.

So please rally any help you can to make it happen Many hands make light work so numbers of around 60 each day will make it easy, and clippers will also be able to finish early on the days.

The entrance to the property is 6 kms up the road from the turn off.

This is a big one guys, we cant do it without your help!  A brief presentation to enlighten North Canterbury anglers and their tireless teams of  Salmonid Culturists, regarding our enhancement programs progress, and the current national review which is questioning the viability of the 100 plus years of dedicated work our anglers have put into enhancing our fishery, will also feature on the days.

A strong show of numbers is needed this weekend so please spread the word far and wide.

We also look forward to welcoming all new comers to this worthy fisheries cause, and provide as much educational information about salmon and trout, and the enhancement programs in place to protect them for our future generations.

Members of the public please contact below as a rough idea of numbers helps with catering needs.

An estimation of time needed on the days is dependent on the numbers present. There is never too many! Typically if numbers are good and around 20,000 an hour are being clipped then it will be 3pm at the latest.

Mark it on your calendar, and we look forward to seeing you all up there at this great family day out, and valuable help out with our fisheries.

Thanks all, Dirk Barr,

After an early promising show the Rakaia river has been quiet for over two weeks.

The same has happened at the Rangitata. There is often a quiet patch around this time of year especially after a reasonable early run.

At this time of year river mouths north of the peninsula will start to fire.

Be ready to go as soon as the conditions allow, good luck!