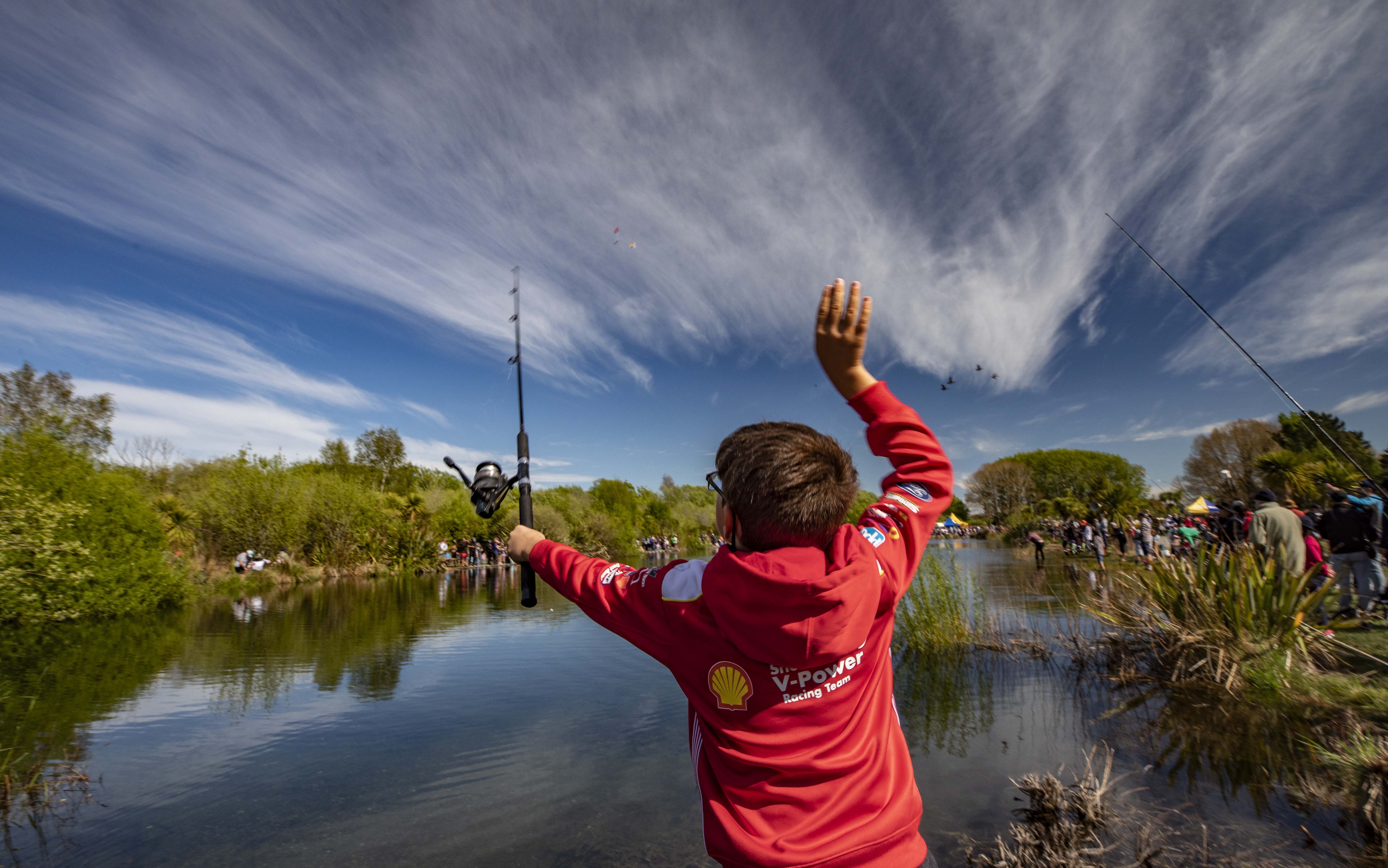 Hello and welcome to the North Canterbury region fishing report, the forecast does not look great this weekend.

Gale force north westerlies will be present right across Canterbury from Thursday to Tuesday next week.

From Wednesday next week the weather should be fine with little wind.

Right: Thousands of young anglers over the years have enjoyed the annual Take A Kid Fishing day at the groynes Organised by Dave Denton, read about his New Years Honour below:

There is also heavy rain forecast for the main divide from Sunday until Tuesday.

Currently the main alpine rivers are low and clear.

This will continue into the weekend as the heavy rain is not expected until Sunday afternoon.

Conditions could be very unpleasant on the riverbed though as gale force north westerlies will be whipping down the riverbed.

There might be a window of reasonably calm weather on Saturday morning, but the wind picks up again later in the day.

All these rivers are now very low which is making the salmon fishing difficult upriver.

For trout anglers though the low conditions can mean some opportunities to explore water in otherwise inaccessible reaches.

Such as the mid to lower reaches of the Waiau and Hurunui.

These areas have plenty of smaller fish and is well suited to spin fishing or soft baiting.

These rivers will likely become high and dirty next week.

Once this resides towards the end of the week there will be some salmon activity.

The high-country lakes are going to be an inhospitable place this weekend.

As mentioned above there might be a small opportunity for some calmer whether on Saturday morning.

However, the warnings for gale force winds are in place right through the weekend so I would proceed with caution if you have anything planned for the high country this weekend.

Back country rivers are running very low this week, they will continue to do so until Sunday evening.

The wind is going to be very strong and will make conditions in the back country extremely challenging.  A fresh in these rivers would not be a bad thing as they have been running low for some time.

If you weren’t aware, David Denton, a Trustee and Chairman of the Kids Fishing Charitable Trust that organises the Take a Kid Fishing event was awarded the Queens Service Medal (QSM) in the 2020 New Years honors, in recognition of David’s work in the field of outdoor recreation and youth.

David has worked tirelessly to deliver the Take a Kid Fishing event in Christchurch for 31 years.

David’s vision to create the first Take A Kid Fishing event in 1988 has impacted thousands of people’s lives. It has developed to be the largest event if its type in the country.

The guiding principle behind Take a Kid Fishing has always been to run a free event. David has adhered to this with every event and that is one reason why it’s been so successful.

David also spent a considerable amount of time developing guidelines for how to operate a successful Take a Kid Fishing event. The sharing of his knowledge has supported the development of other similar events throughout NZ.

Here's his full citation from the office of Prime Minister and Cabinet for the The Queen's Service Medal:

For services to outdoor recreation and youth

Mr David Denton established the New Zealand Future Fishing Foundation in 1988, with the objective of giving children a sense of confidence and self-worth by involving them in a healthy outdoor pursuit.

Mr Denton founded the Take a Kid Fishing (TAKF) programme in New Zealand, organising the event from 1988 to 2018. He formed relationships with sponsors, retailers, clubs and associations in order to ensure the event remained free-of-charge. He established and maintained the relationship with Isaacs Conservation and Wildlife Trust, who have provided salmon for the TAKF event for more than 20 years. Alongside organising the TAKF programme, he held the role of Chairman of the Kids Fishing Charitable Trust for 20 years. He has also served as the President of the New Zealand Sports Dealers Federation and an Executive Member of the Sports Industry Association. Mr Denton became a Life Member of the Sports Industry Association in the 1990s.

Fish & Game would like to congratulate Dave on his honour, which I think everyone would agree with is well deserved, and we would also like to thank him for his tireless efforts over the last 30 years.