Now's the time to adjust your thinking: wrap up warm and switch tactics – in most regions, that means forgetting mallards in coming weeks and instead having a crack at those game birds still in season.

If you take this advice, you won't have to pack your shotgun away and say goodbye to some fine wild food, not to mention exercise and excitement in the chilly but great outdoors.

The season for upland game birds – including cock pheasant and California quail - runs right through to 28 August in many regions. For something different, one or two regions offer other species such as chukar and red legged partridge.

In some regions you can also hunt black swan until the end of August. Bag limits for all these birds varies from region to region on the health of local bird populations, so be sure to check the regulations that apply.

As always, if you're planning on shooting public places like river beds, please think about safety and your firing zone. Remember, you're not the only recreational user of a river bed in winter…

If you have any concerns about whether you are legally entitled to hunt there, act responsibly and call your local Fish & Game office, council or police to check it out.

We also urge hunters to do farmers and other rural dwellers a favour and target pukeko – the species can be hunted up until August 28 in most regions. In part of the West Coast region, there's a generous bag limit of 20 pukeko (and the same limit applies to pheasants on specific properties).

Now's the time to also think ahead to next season. It's a great time of the year to plant out some species to improve the habitat around your pond. Wetland plant species such as the sedge Carex Secta and flax Phorium tenax provide great cover for mallards and dabbling ducks.

Follow up with some predator control during the breeding season and you've set the scene for better breeding, and more ducks down the track.

P.S. This month's cover photo shows Bill McFarlane and his dog at Lake Mangahia, in the Waikato.

New rules for smaller shotguns
If you're planning to buy a new shotgun keep in mind that the lead-shot exemption for sub-gauges is on the way out. This will be phased in over the next four years. The first two seasons in 2018 and 2019 will give sub-gauge users time to start making the transition. The following year, 2020, there will be no sub-gauge lead allowed on Fish & Game or DOC land over or near a waterway. The year after that, 2021, sub-gauge users will not be allowed to use lead shot over or near any waterway anywhere - exactly the same rules as exist for 10 and 12 gauge users now. To learn more ab out the new policy, click to read the FAQs here. 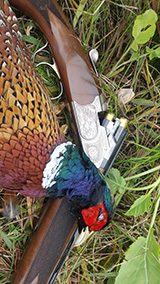 So the mallard season is over in many regions for another year – and it's time to switch to some different targets. Now is the time to rethink hunting opportunities in both North and South Islands. The upland game bird season runs for the best part of another two months in most regions. So what are the seasons and the bag limits for pheasants and quail, and even black swans and one or two other less well known species? Please head back to our 'rules & regs' for the North and South Islands here – or phone your nearest Fish & Game office for a friendly chat. 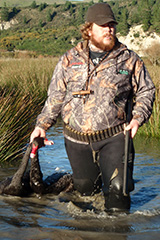 The Black Swan competition which began on Opening Day in North Canterbury has weeks to run – until 21st September. The hunt's main aim is to provide hunters with another focus during the game bird season. Another push is for folk to harvest black swan as a source of good wild food. Naturally, the comp also helps local farmers who have black swan pest issues. The competition is confined to North Canterbury Fish & Game region licenceholders – but they can still enter subject to the other competition rules, of course. Check out the details here in Both Barrels or speak to our North Canterbury staffers on 03-313 5728.

Where to catch a whopper…

If you fish as well as hunt, no prizes for guessing that the Mackenzie Basin's hydro canals have become the country's most popular fishery. A survey shows anglers putting in over 40 thousand fishery visits there last season. And they are tasting success, with the survey showing that on average 122 fish are caught in the canals every single day. Following a NIWA survey that showed that the hydro canals were the most popular freshwater fishery in New Zealand, Central South Island Fish & Game conducted their own survey to get the full picture of what was happening there. For details click here.