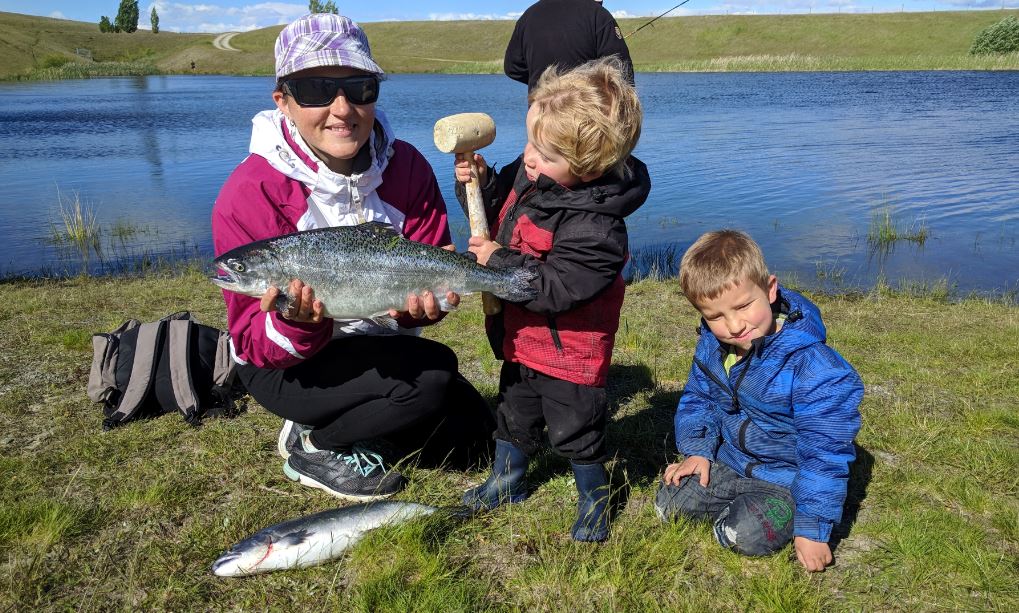 With the rain-soaked start we've had to December and summer, things are looking brighter all the time, especially with more and more fine and fishable days coming along.

Right about this time last year, the dry conditions had started to put pressure on some fisheries. Early summer this year is very different…many rivers have had healthy flush-outs and the fish are in good condition.

And we're pleased to confirm there are some great fishing opportunities out there to hook into.

Some of those opportunities may be right under your nose - Wellington's regional report has the teasing tale of an enormous brown trout only metres from the state highway.

Staff note a "wealth of opportunities" within easy striking distance for most folk living in the lower North Island. They also have some great tips on what approach to take to make the most of these opportunities.

Lake Rotorua's stream mouths are attracting the annual run of brown trout including some impressively-conditioned fish in excess of 3kg.

The stream mouths that are open to both fly and spin methods are a great place to chase one of these lunkers.

The release of "jumbo trout" in Lake Rotorua, after a clean out of the Fish & Game hatchery's display pond, has been grabbing headlines too (read below).

Down south, the first salmon have been caught. 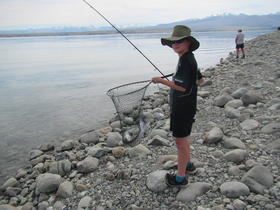 As expected, the first sea-run salmon catches of the season have now been nailed in the Canterbury rivers - Rangitata, Waimakariri and lower Opihi.

There have only been small numbers caught so far but fish up to 9 kg have been landed.

Staff reckon that by the Christmas holidays, the Waiau, Hurunui and Rakaia - should have some salmon around. Oh, and some stunning rainbows have been taken around the Mackenzie Country's fabled salmon farms in recent weeks.

Thanks to Graeme Marshall for the photo of young Jack Neal with a salmon from Lake Tekapo.

And if you're holidaying on the coast, don't forget the estuary fishing on offer with kahawai a possible 'bycatch.'

Have a great Christmas but take care around the water.

P.S. Big thanks to Greg Sosna for supplying the photo (above right) of his wife Helen and their two sons at Loch Cameron in the South Island. Helen is holding a plump salmon; three year-old Jordy eagerly wields the hammer, while five year-old Alex is pretty blasé about the photo shoot. The family of four is on a "sabbatical," travelling the country before Alex starts school in the new year (great idea).

Will Spry says due to the earlier poor weather, rivers are under-fished and there are plenty fish to be caught... Find out more

Graeme Marshall writes about a “wealth” of fishing in South Canterbury, including smaller streams ... Find out more

Heat has gone from the day. Last rays of sunlight throw a golden glow over the water and a light chop pushes wavelets to the shore. Tori curses quietly. She’s only wearing thigh waders and the chop is high enough to slop water onto her trousers. She’s fishing a 6-weight, fast-sinking line with a 2-metre leader. A #8 dragonfly nymph imitation completes her outfit.

Earlier in the day, when the sun was on the water, she had spotted a channel in the weed beds that led to a drop-off about 20 metres from the shore. The whole shoreline looked fishy and insects were rising – dragonflies and damsels darted in search of prey and mates. Gnats and midges clouded the surface and sandflies came out to feed.

Tori’s cheeks and hands were spotted with their bites and she rubbed the back of her hand against the rough surface of her waders. The channel looked to be a strip of papa a few centimetres deep, and its light grey colour would contrast nicely with the dark green colouring of the nymph she would use... Continue reading here.

Posted in Reel Life; Posted 4 years ago by Default Admin