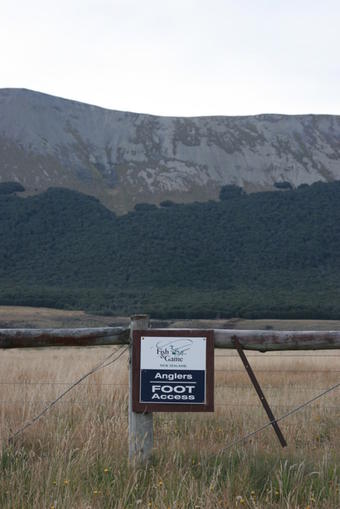 The access to public recreational resources that we have enjoyed in the past is being eroded through changing land use and changing land ownership.

The nation’s natural resources are part of the public estate and comprise a central element of what differentiates New Zealand from the “landed gentry” structure in the UK that settlers came to New Zealand to escape.

Working towards free, reasonable, practical and enduring access for our licence holders is extremely important to Fish & Game, and is advocacy fundamental to our promotion of the interests of anglers and hunters. Fish & Game supports the three high level principles:

This is an issue predominantly for anglers and hunters, but has implications for other parties. Wildlife and fisheries do not attach to land title and should be accessible to the public, especially the public who pay licence fees to hunt/fish. Specific provisions in the Wildlife and Conservation Acts preclude the sale of hunting and fishing rights.

In some situations, however, landowners have sought to exclude those who didn’t either pay/stay or use the services of particular commercial guides. Fish & Game, anglers and hunters are seeking that the matter is properly addressed.

Even if it doesn’t directly relate to non-anglers/hunters, the issue is that access may be ‘captured’ to public resources by landowners.

Fish & Game’s position is that New Zealanders have “fair and reasonable access on foot along the coastline, rivers, around lakes and to public land”.

Achieving the right balance between public and private property rights is essential. Land ownership is not absolute; the Queen’s Chain exists in many areas, there are plenty of unformed public roads and water, and fisheries and wildlife do not attach to the title in New Zealand as they do in other countries. The public can, and do, reasonably expect reasonable access to their own resources, while recognizing legitimate private property interests where these exist.

Negotiation on a case by case basis is usually supported, but the basis for the negotiation needs to be clearly specified. The issue is how to achieve the objective of walking access, not whether this is a valid objective.

Negotiation should be the preferred option for all parties to achieve an enduring and equitable result, but if either party refuses to negotiate that should leave open the option for a decision to be considered without that party’s involvement.

Negotiating parties must both be in a position where the primary objective is not able to be ‘traded away’. In particular, where the negotiation includes any changes to public road provisions, any new access created should not have lesser rights available to the public than was available on road. This is particularly important to recreationalists and hunters seeking access to areas of public land with vehicles.

Fish & Game believe that compensation could be payable only for demonstrable loss of any property right, which would not necessarily be restricted to loss to private property owners. This would not include any costs of facilitating access, such as by the provision of signs or stiles, which should not be borne by the landowner. In particular, it was considered that ‘it would be rare and exceptional for walking access to result in demonstrable loss of a kind that ought to attract compensation.’

Unlike general land, customary Maori land has never been alienated and so the ‘Queen’s Chain’ provisions don’t apply.

Landowners have raised a number of concerns about inappropriate behaviour by visitors. While the Trespass Act is relatively draconian, it is also relatively ineffective from a landowner perspective at dealing with most of these issues. An enforceable code of conduct, and mechanisms supporting landowners’ legitimate concerns on this issue is supported. Note, however, that many of the issues raised in submissions by landowners were not real issues or are irrelevant to the issue and have not been realised where access has been negotiated by the Walking Access Commission.

The greatest extent of the Queen’s Chain, where this exists, is public roads. In addition, there are extensive unformed legal roads throughout rural New Zealand which were originally surveyed to provide access to all lots. Where solutions to access issues involve closure of public roads, the resulting access arrangement should not be of a lesser standard than the pre-existing legal access.

Frequently access issues arise with land use changes (such as subdivision; land use intensification; tenure review; sale, especially to overseas owners). Previous arrangements to secure/provide public access may have been adequate, but may no longer be appropriate or sufficient after the land use change. Some of these have specific mechanisms (e.g. subdivision) which can enable provision of public rights of access where these don’t already exist.

Both esplanade strips and marginal strips may be noted on the title and not surveyed. This can make them hard to find but at least there is theoretical certainty of access along a river where they do exist where access is provided.

While these are not usually extensive in total, they are the only way in which the Queen’s Chain is presently able to be extended on the sale of Crown land or on certain subdivisions, respectively. It is clear, however, that reliance on this as a mechanism to ‘complete’ the Queen’s Chain will be incomplete. There are many examples where local authorities and sometimes LINZ or DOC do not require or manage these appropriately to enable practical access.