Manchurian wild rice could trick you 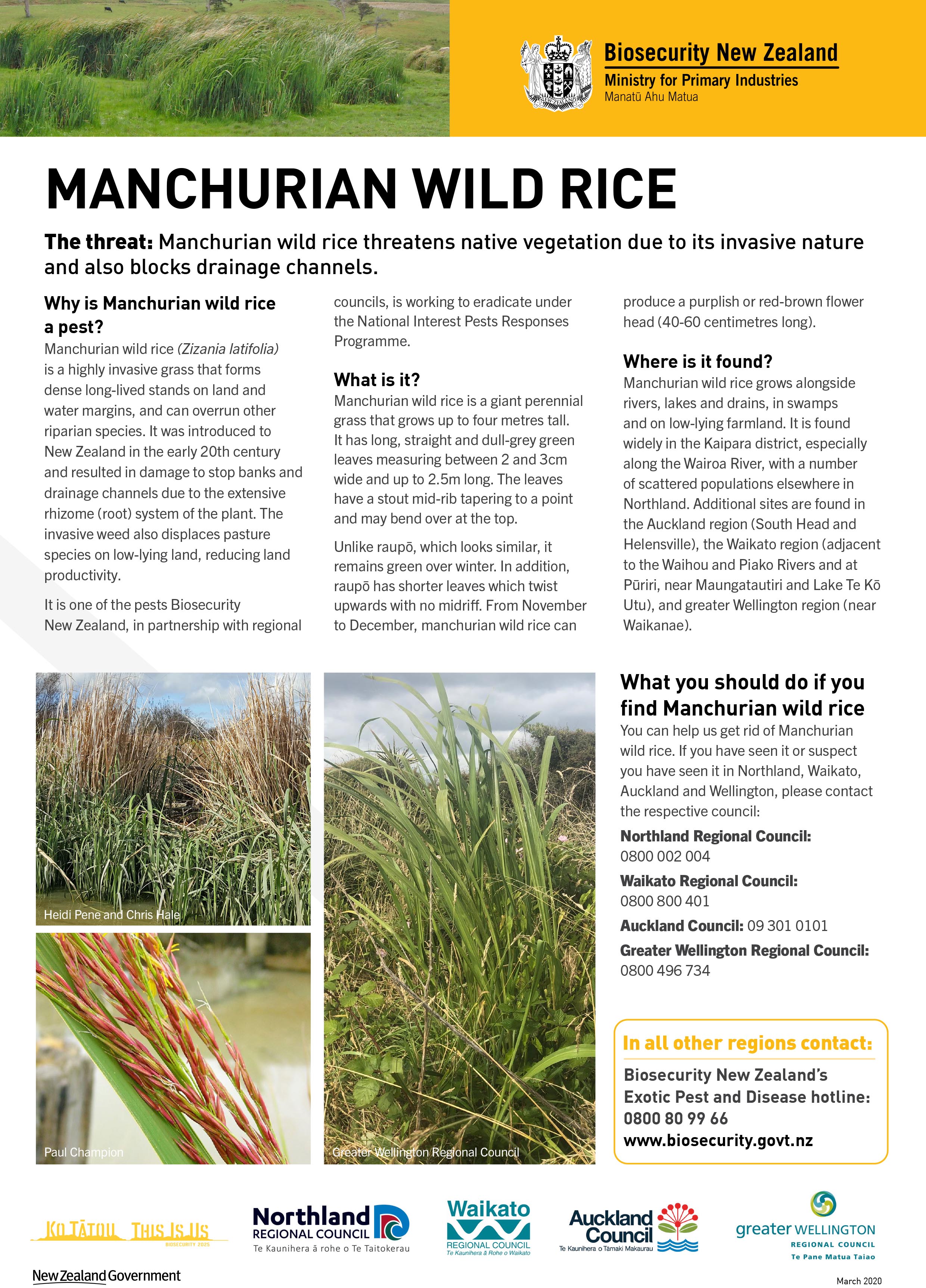 Duck hunting gets you out along the waterways and in among some of the plants that like wet feet.

One nasty pest plant you might come across is Manchurian wild rice.

This very invasive grass grows over 3 metres tall and can take over areas of dry land or shallow water.

It’s such a troublemaker that it’s on the list of national interest pests, and Biosecurity New Zealand and its partners aim to stamp it out wherever it grows.

Manchurian wild rice is currently known to be in four regions of the North Island – with significant infestations in Northland, Auckland and Waikato and one site in the Wellington region on the Kapiti Coast. In Northland, it’s got such a hold along one river system that the focus is to stop it from spreading because removing it is not currently realistic.

Waikato Regional Council works with Biosecurity New Zealand to eradicate Manchurian wild rice from the region because it blocks drainage and access to water and increases the risk of flooding. It also displaces native wetland plants, smothering and crowding them out until there’s only a dense stand of very tall Manchurian wild rice left.

In the Waikato region, Manchurian wild rice is found along the Waihou River near Turua and on several rural properties in the Horahora area of Waipā district. It is causing particular concern in the Turua area, says Darion.

Waikato Regional Council often finds outlier infestations of Manchurian wild rice around duck shooters’ maimai, he notes. “It is likely a popular vegetation choice for cover because of its tall dense growth form that would be useful camouflage in the duck-shooting season.

“Duck hunters grabbing Manchurian wild rice for their maimai are possibly confusing it with raupō – the native bullrush. They have a similar appearance and grow in the same habitats.”

If you look closely, raupō is easy enough to distinguish from Manchurian wild rice, as raupō does not have an obvious midrib or remain green over winter, as the pest species does. Also, raupō has distinctive cylindrical brown flower spikes, while Manchurian wild rice has 50cm purplish or red-brown seed heads typical of a grass from October to December.

If you find an infestation of Manchurian wild rice, please report it and do not remove it. Contact the Biosecurity New Zealand Exotic Pets and Disease hotline on 0800 80 99 66. for more info click here.

For Kaipara area: There are large, known infestations, especially along the Wairoa River, so please only report smaller or suspected young infestations in this district.