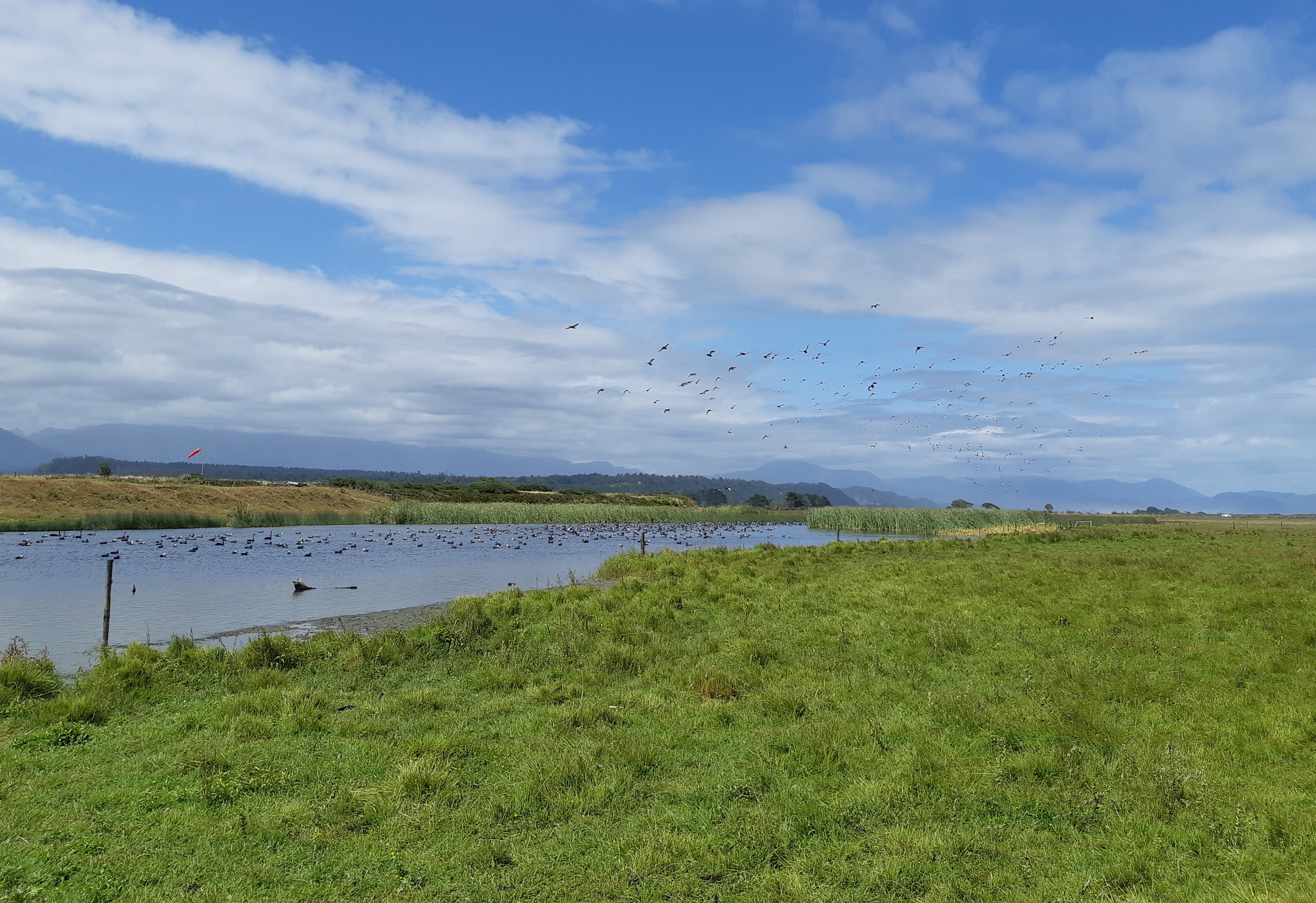 While the delayed game bird season has taken some getting used to the good news is that under Alert level 2 hunters will be able to enjoy an almost normal game bird season.

With travel restrictions lifted we can access our favourite hunting locations, including those on Public Conservation Land.

We still need to be conscious of social distancing and keep gatherings under ten but at least we can share a maimai with family and friends.

Right:Record numbers of Paradise shelduck were counted this year on the West Coast (photo Baylee Kersten).

Many of you took the opportunity over the lockdown to tidy up the hunting gear and learn some new hunting tricks.

Now is the time to put them into practice – thanks for your patience.

We survey numerous sites between Karamea and Haast each year to gain a good understanding of game bird numbers.

Greylard in particular are a challenge to monitor due to behavioural changes resulting from weather, disturbance and feeding patterns.

Observing greylard movements and being prepared to alter your hunting plans will help improve your success.

Overall, it is looking very promising for a productive opening weekend this year, so make sure you’ve got your gear ready to go.

Hunters really enjoyed this opportunity and the only issues faced seemed to be either reaching bag limits or running out of ammo.

We plan to continue these events this season provided we meet the conditions set out in the relevant Covid 19 Alert level.

We will keep you updated.

This equates to approximately; 8 greylards, 6 paradise shelduck, 2 pukeko and less than one bird each of shoveler and swan.

Opening weekend accounted for 41% of the season’s harvest by West Coast hunters.

Hunters who continued to put the effort in over the remainder of the season achieved higher harvest rates per hour of hunting effort than they did on opening weekend.

Notable was hunter’s keenness to diversify their bag with those targeting swan being particularly successful.

Hunters are reminded that this the third year of the phasing out of toxic shot for sub-gauge shotguns.

Lead shot is prohibited for the 2020 season across all Department of Conservation and Fish and Game administered lands (except those using a .410).

In 2021 lead shot will be prohibited for all licence holders (irrespective of gauge used) across all lands (public and private) when hunting game birds within 200 metres of all waterways and wetlands.

The limit for black swan has been increased to four and they are now included in the 2021 summer season.

If you are new to game bird hunting, you may find it difficult to know where to go during the season.

Don’t be afraid to scout areas that contain birds and to talk to landowners for permission.

If the land is public conservation land and administered by DOC check its status, is game bird hunting allowed?

If so, you will need a permit from your local DOC office to hunt it.

Consider other hunters, ensure you are not too close to other maimai sites and keep in mind other hunters won’t appreciate another hunter building a maimai close to opening weekend, as disturbance may push birds away from the wider area.

Note that during the season bird’s preferences will shift them to different locations, so be prepared to move with the birds and look for new areas.