Following a frosty start to the month the recent rain has the birds out moving.

The birds have mobbed-up well so there are opportunities for some great hunting with some scouting done.

With no large weather events occurring between now and closing day, birds should be predictable, and scouting will be very beneficial.

When scouting be sure not to disturb the birds, as any disturbance will likely reduce the numbers of birds there in the days following.

Nonetheless, there is plenty of opportunities to target pukeko if the ducks give your hunting party the sidestep.

All the best for your closing weekend from the team at West Coast Fish & Game.

The first and second event was located in Barrytown and Birchfield, targeting Pukekos.

Weather was marginal both days but both events had good attendance and high success, with bag limits not being uncommon. 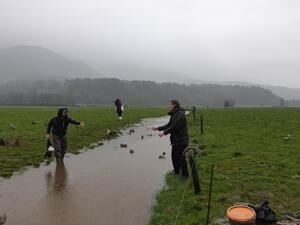 The last event was a weekend trip to Karamea, similar to the trip two years ago.

With heavy rainfall leading into the weekend and light rain over the weekend the hump and hollows were rather full.

None the less those who braved the wet had good opportunities to hunt, greylards, paradise shelducks, and pukekos.

With ammo shortages and not reloading fast enough being an issue on the pukeko drive, a few extra hunters would have been beneficial.

None the less the landowners appreciated us braving the weather and reducing their pukeko population.

So, thank you to all hunters that came to our events this year and contributed to the management of our game bird resource.

To anyone wanting to participate in future events, send an email to bkersten@fishandgame.org.nz

Another banded bird shot on the West Coast

As many regular readers of West Coast Both Barrels will remember, a banded mallard drake was shot in Westport last season.

Well, the Buller region has done it again with a banded mallard hen being shot by a lucky farmer on his property in Karamea!

The hen was banded near Palmerston North, just over 300kms from where she was shot in Karamea.

With 86% of banded birds recovered within 50km of the banding site, these great flights aren’t common, but it sure makes a great surprise for us South Islanders when they end up down here.

The information gathered from banding work plays an important role in both research and the management of greylards, particular in the North Island.

So, if you are lucky enough to harvest a banded bird, please go to the following link and complete the band return form. 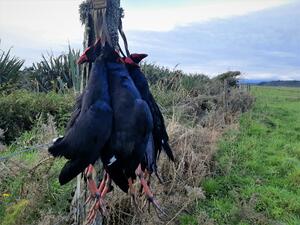 Closing day is Sunday the 25th of July, following that, game bird hunters will have to wait till summer to hunt game birds again as the birds get left to breed over spring.

Come Summer, from the 1st of January to the 20th of March hunters will be able to target pukeko (daily bag limit of 10) as well as opportunities to hunt paradise shelducks and swans in March.

Paradise shelduck can be hunted between the 5th and 20th of March 2022 – 10 bird daily bag limit.

The intent of the summer pukeko season is to create additional hunting opportunities for the abundant game birds benefiting both hunters and landowners alike.

It is also hoped that with long day length during the summer hunters might be able to get out more and take the opportunity to introduce someone new to the sport.

Local Clay Bird Target Clubs are always keen to have additional numbers at their events.

Try to go along in the offseason – club members are full of knowledge when it comes to shotgun shooting and are more than happy to share it.

Next season you will shoot much better as you will have kept your eye in during the offseason and might have even got rid of the odd bad habit or two.

Posted in Both Barrels, Hunting; Tagged Hunting Posted 12 months ago by Default Admin