Small creeks on the West Coast can offer big fish

Much of the holiday season has seen El Nino style weather patterns, bringing large amounts of wet weather to the Coast over the past month.

The Reefton area seems to have been the go to spot recently, being more sheltered from the coastal weather.

The rivers around Reefton have been in good condition during early to mid-January.

Above Right: The Inangahua River from Perserverance Bridge last week.

If you're in the area don’t forget the main Inangahua River, it can fish really well and often receives less pressure than some of the other rivers nearby.

Other good options around the Coast are fishing the flooded lake margins, and the eastern shore of Lake Poerua is well worth a look, or head for the spring creeks.

There are many un-named little spring creeks throughout the West Coast Region, and where these meet the main rivers good fishing is likely as trout move up into them from the flooded main rivers.

Google Earth is a good way to search for these little creeks.

Once discovered, getting access over private land is usually granted, so long as landowners’ properties are respected and anglers leave gates as they found them.

If you’re lucky you may just find that small spring creeks can provide larger fish than expected.

Take the kids fishing for the holidays

While your kids are still on holiday they'll be looking to get out for some activities in fine weather.

Left: Many groups of families and friends have been out over the Christmas period. This group was making use of day licences to take the kids fishing near Reefton.

Many of your local lakes and lower river sections offer good opportunities for kids over the summer. Some places to try with them before they head back at school could include:

Greymouth - Lake Brunner shoreline at Moana, Iveagh Bay or Mitchells. The Grey River itself, look for smaller side braids with a stable bank.

Hokitika - perch fishing Lake Mahinapua & Mahinapua Creek are good options. Kawaka Raceway is worth a look or take a walk up the Upper Hokitika River and try spin fishing for some rainbows.

South Westland – lakes Paringa, Moeraki and Mapourika all have good fishing along the shorelines with brown trout cruising in close to the edges looking for food. Try spinning, bait fishing or a bubble float with a cicada fly off it.

Get set for salmon in West Coast rivers

With Christmas and the New Year past, it's time to start thinking of salmon.

Salmon generally start to move slightly later on the West Coast than on the Canterbury side of the island, however I've heard that some sea-run salmon have been hooked at Lake Mapourika already.

By February it will be well worth being out.

I was down there last year for a visit and it looked as if they were having a great time.

I talked to Lindsay the other day and he said they're looking to hold the event on the 4th-6th of March this year, so pencil those dates in the calendar.

A number of people come some way to fish Lake Mapourika, probably for the scenery as well as the fishing. It’s a truly great spot, especially during late summer or early autumn.

During periods of fine weather from now on, trout will be looking to the surface for a large percentage of their food source. 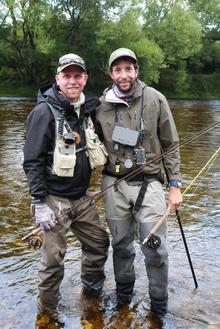 Right: Mates Claudio and Driss were hoping for an evening rise in the Grey Valley last week.

Fishing dry flies can be really effective in the height of summer, lifting trout from areas where you may not have spotted them.

It’s a good time to be casting large terrestrial flies.

Each year we get a number of visiting anglers asking when is the best time for cicada fishing.

Generally I would say mid-January through to early March, with activity peaking in February.

For some reason on certain rivers, cicada flies are not always the best, go to dry flies. Keep an eye on other bugs floating down the stream and don’t neglect other terrestrial fly patterns.

Often the low profile foam patterns can be very successful. Many of our West Coast Rivers have plenty of turbulent water so a visible sighting post is a big help to keep an eye on your fly.

Tight lines till next month.