With the new season comes a lot of opportunity, especially here on the West Coast.

Come the first of October every waterway but one small creek (that is closed permanently) are open to freshwater angling.

Rivers that have been closed over winter will yield some great fishing.

Fish densities will be slightly elevated with some non-resident trout yet to drop back into the larger systems and the trout being very willing to bite post spawning.

It’s the time of year where you can use bold gear and heavier line, hopefully increasing your catch rate.

We encourage using heavier line when possible as it shortens the fight and improves survival rates of released fish.

With the frequent rain we are currently experiencing, in a good old spring fashion, slightly coloured and elevated rivers likely will be a common occurrence for the next month or two.

This greatly tips in the favour of spin anglers, as the reduced visibility makes a lure much more realistic.

Fly anglers also can take advantage of coloured water to target typically spooky trout but ensure you go big or bright if it’s very limited visibility, otherwise you may not be seen.

Ensure you check the weather forecast and river flows before heading out, and if you think it looks unfishable, you can always visit a spring creek or lake instead. 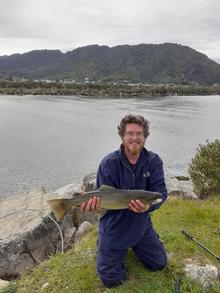 We have been informed of several  large trout in the five to ten-pound range being caught in the low reaches of West Coast Rivers this month.

With the seasonal influx of bait fish only really beginning to take off, more will arrive in the lower reaches over the coming weeks.

Bigger ones too potentially, with it not being uncommon for them to occasionally tip over the 10-pound mark in our West Coast coastal fisheries.

With dozens of river mouths just a few minutes drive away, opportunities abound for anglers on the West coast.

So this season don’t feel like you must drive for half an hour to arrive at a quality fishing spot.

Instead just call in at your local river mouth, you might be in for a surprise how much luck you have there.

1.            The salmon bag limit has been reduced to one fish per day reflecting efforts to try and manage the declining recreational salmon fishery on the West Coast (covered in note 1 of West Coast regulations).

3.            The minimum size limit for both salmon and trout on Lakes Ellery, Moeraki, Paringa, Mapourika and Ianthe has been increased from 250mm to 350mm (covered in note 3 of West Coast regulations).  The remainder of the West Coast region still has no size limit.

Best of luck for the 2019-20 fishing season from the crew here at West Coast Fish & Game!