The cicada season is upon us and anglers across the region are enjoying some exciting surface action. Recent warm dry weather has brought the trout to the surface as insect activity peaks for the summer.

This is a fantastic time of year to target cool lower trout density rivers, such as our South Westland braided rivers.

This being that trout tend to hold in obvious lies, have had little to no angling pressure, these rivers tend to not get to warm and drifting big dries that they will willing accept can cover a lot of water blind fishing.

Spin anglers don’t think this is message just for the fly fishing enthusiasts, you too should target these naive trout with big dry flies and a bubble.

Another reason to be hanging around the cooler West Coast rivers is the salmon season is upon us. Reports are starting to come in of salmon getting caught following the recent floods.

Unfortunately, everyone who has caught one so far, has been camera shy but if you have a photo of a West Coast salmon you’ve caught this season, we would love to hear from you! 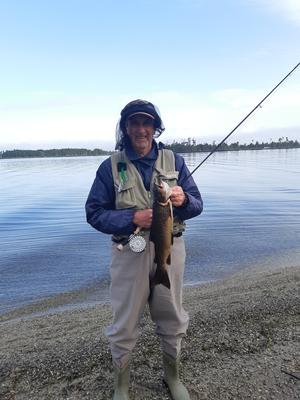 Our compliance rounds has seen a recent influx of angler on the salmon rivers so it’s likely there is a few getting caught and the word is out.

Fingers crossed the season only improves and we see some large salmon this season. For more up to date information, ensure to like our Facebook page, West Coast Fish & Game.

As for the lakes, same message as last month, avoid mid-day fishing in the heat, or go out following a wet spell.

We have had reports of experienced anglers finding the fishing tough in our smaller shallow lakes, going to showing that no amount of skill can catch a trout that isn’t happy.

None the less, those who have made use of alarm clocks have found some happy trout that are feeding well, and the results speak for themselves.

In response to increased angling pressure this summer on some of our popular back country brown trout fisheries new temporary signs will be going in to remind anglers how be an ethical angler on these fisheries.

If you come across anglers behaving unethically, we want to hear about it as all anglers should be following the anglers code of conduct which on page four of the regulations. The new signs will read:

This river upstream from this point is currently receiving heavy angling pressure. Fish and Game wants to ensure all anglers have a good experience and encounter some great fishing. To increase the likelihood of this and conserve the fishery, anglers are encouraged to follow the New Zealand angling ethics listed below:

Do the kiwi thing, be an ethical angler!

All the usual drift dives have now been completed but we do have some additional new sites in the pipeline which we hope to get done also.

The overall trend has found that small trout numbers are down, likely due to the wet spring with young trout most vulnerable to flooding.

Large and medium numbers appear to be around average, but the trout were in good condition so we should expect a very fruitful spawn this coming winter.

For more detail of the dive results, check out the drift dive report which will be posted on our website following it being presented at a council meeting in June. 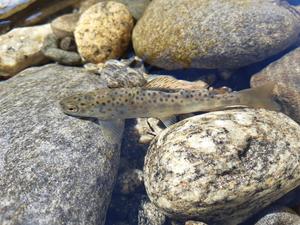 One of the many five gram trout captured from electric fishing the research spawning streams in the Mawheraiti Catchment. (Photo Baylee Kersten)

As mention in a previous reel life, we are carrying out a research project in the Mawheraiti River Catchment.

We carried out their second electric fish of the research spawning creeks in February.

The next generation of brown trout are doing well with similar numbers caught and them growing rapidly.

This year’s trout offspring on average have increased more than five times their weight recorded 11 weeks ago, going from just under a gram to now five grams!