Autumn has served up some fickle weather for the West Coast this year, with regular rainfall and strong winds.

The rivers have been running high, not offering ideal conditions for salmon anglers in recent weeks.

Above right: Salmon spawning surveys have been underway again.

Despite the bad weather, there have been some settled periods and at time of writing, the last week of the month was shaping up to be a good one.

Usually autumn, and April in particular, provide some great days with light winds on the Coast.

The season often provides late season hatches and pleasant conditions to be out on the water.

If you're visiting from away do your weather research first.

Often we don’t get as much rain as forecast, and the long-range forecast often tends to change for the better a few days out.

The forecast charts at www.metvuw.com are useful.

If I was to head out just before the end of the month, I would be going for a last chance fish in the spring creeks, fishing the lakes, or heading for a late season salmon fish. Too many choices!

Staff beginning salmon spawning surveys are anticipating good numbers of returning fish in the spawning streams after a productive season in the south Westland lake systems, and the Taramakau River.

In recent years fishery enhancement has contributed to some good returns of salmon.

This winter we'll be looking at additional tributaries in an effort to locate unknown spawning areas, or survey areas not looked at regularly.

The Fish & Game drone is proving to be a very effective and efficient tool for field work.

For the likes of small open creeks across larger rivers, its use means we no longer have to make kayak crossings, etc. It means we have more time to look into new areas.

It's always useful when anglers or other outdoors people inform us of spawning sites that we didn't know about, as this means we can get a more accurate estimate of what is coming back.

Most of the more recent releases have been of fin-clipped juveniles, so we're able to easily determine what contribution the released salmon are making. 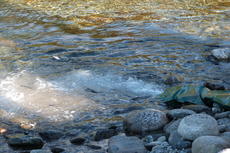 Fishery enhancement continues this autumn with salmon to the Taramakau River, Hokitika River and Lake Ianthe.

The Taramakau release has already been made, with the remaining sites to have salmon released in the next few weeks.

Another load of juvenile brown trout will also be released into Lake Kaniere shortly.

Sponsorship from locally owned Griffen and Smith Mitre 10, and the South Westland Lions have continued to boost salmon enhancement releases this year.

Fat autumn browns in the lakes

Many trout in the local lakes have been in plump condition recently, as they've reach that prime pre-spawning state.

Autumn and early winter often provides its share of settled days so don’t put the gear away with the cooler weather as the lakes are still a great place to be.

The majority of the larger lakes are open for trout angling over the winter period.

But please check your regulation guide, as the likes of Lake Poerua is due to close at the end of this month.