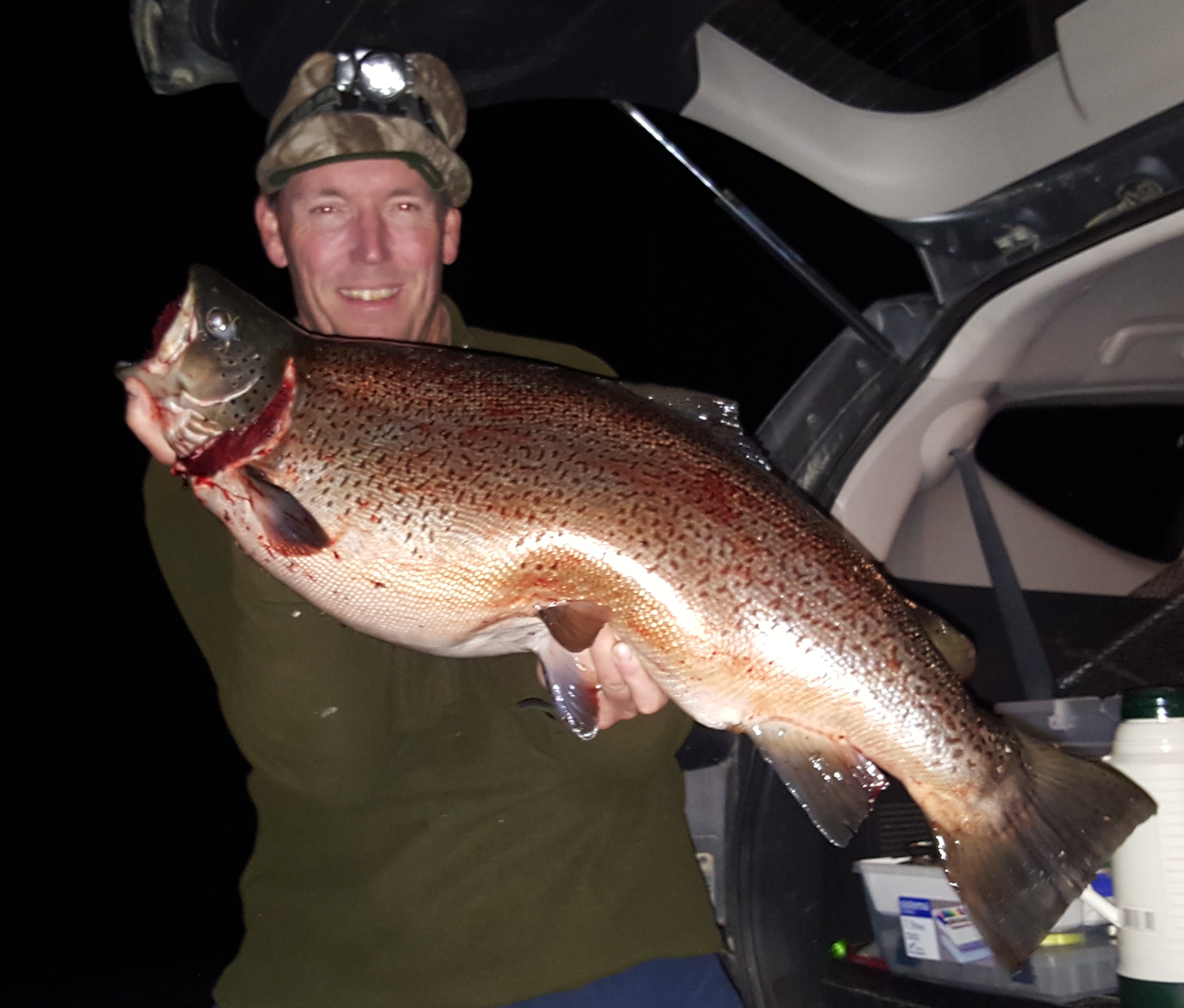 Just like last week I’m predicting another weekend of classic spring conditions that require a bit of an open mind, a plan ‘B’ and perhaps a slightly less keen eye on the Environment Canterbury river flow website. As a point of reference for anglers aiming to fish the lower Opihi River, I fished between the SH1 Bridge and Pleasant point last Sunday. The flows on the ECan website at SH1 where about 35 cumecs, at that level I could sight fish in the very shallows only and I considered the conditions perfect for spin and worm fishing but marginal at best for sight fishing. There were fresh boot prints where I fished and an angler popped up on the other side of the river. Still, I managed to get a follow and a brief hook-jump-release on my old favourite black and gold toby.

Right: Rhys Barrier and his first fish from the canals - a 25 pound brown.

Unlike last weekend though most of the low country rivers are flowing clear and enticingly fishable. Even more exciting news considering it’s a 3 day weekend with Labour Day public holiday on Monday. Keep in mind that we had a cold wet winter and near record snow packs on our ski fields in south and mid Canterbury. If we get a sunny warm windy day over the weekend, rivers like the South and North Opuha, the Opihi, Ashburton, Rangitata and Orari may discolour due to snow melt. It’s not just rain affecting river clarity this time of year.

Since winter there has been a noticeable increase in the angler numbers at the canals and with the coming weekend being a 3-day’er it would be safe to bet there will be plenty of anglers about. Fortunately there is plenty of space for all and fish throughout the canals.

Rhys Barrier, Fish & Game manager from Nelson/Marlborough made his first trip to the canals during the week with a plan to see what all the fuss was about and harvest a couple of fish for the family.  Rhys and a mate fished the Ohau A Canal relentlessly for a day and a half, expecting to hook a few trout and salmon. Although Rhys could see plenty of whoppers and put every lure in his tackle box past fish, frustratingly, he just couldn’t tempt any to bite. It wasn’t until midnight that a 25 pound brown attacked his soft plastic that Rhys fished deep with a very slow retrieve. He used a whip tail grub style lure. He may have only caught one fish for all his effort but fair to say his family will get a few of meals from it. During the same spell Rhys’s mate Bruce hooked one massive fish on a nuclear chicken soft bait but it spat the hook before they got a good look at it.

Fish & game Officer Hamish Stevens was passing through Twizel on Wednesday and checked a few licences at the Pukaki-Ohau A Canal. He said it was busy with anglers and a couple of them were doing well catching small to medium size salmon while fishing the Ohau A Dam penstocks. He said he wondered if a few had got out from the pens but didn’t see enough caught or get enough angler feedback to really warrant that claim.

Our Kids Fishing Day is fast approaching and once again we will be holding the event at Loch Cameron near Twizel on the 18th of November. For all the event details click here.

Next week registrations will open for Turning the Tide, Fish & Game’s salmon symposium that is being held at the Hotel Ashburton on November 11 & 12. We have some fantastic speakers coming and we need anglers to come so that together we can plan a way forward for the salmon. Keep a watch on the Fish & Game website for updates.