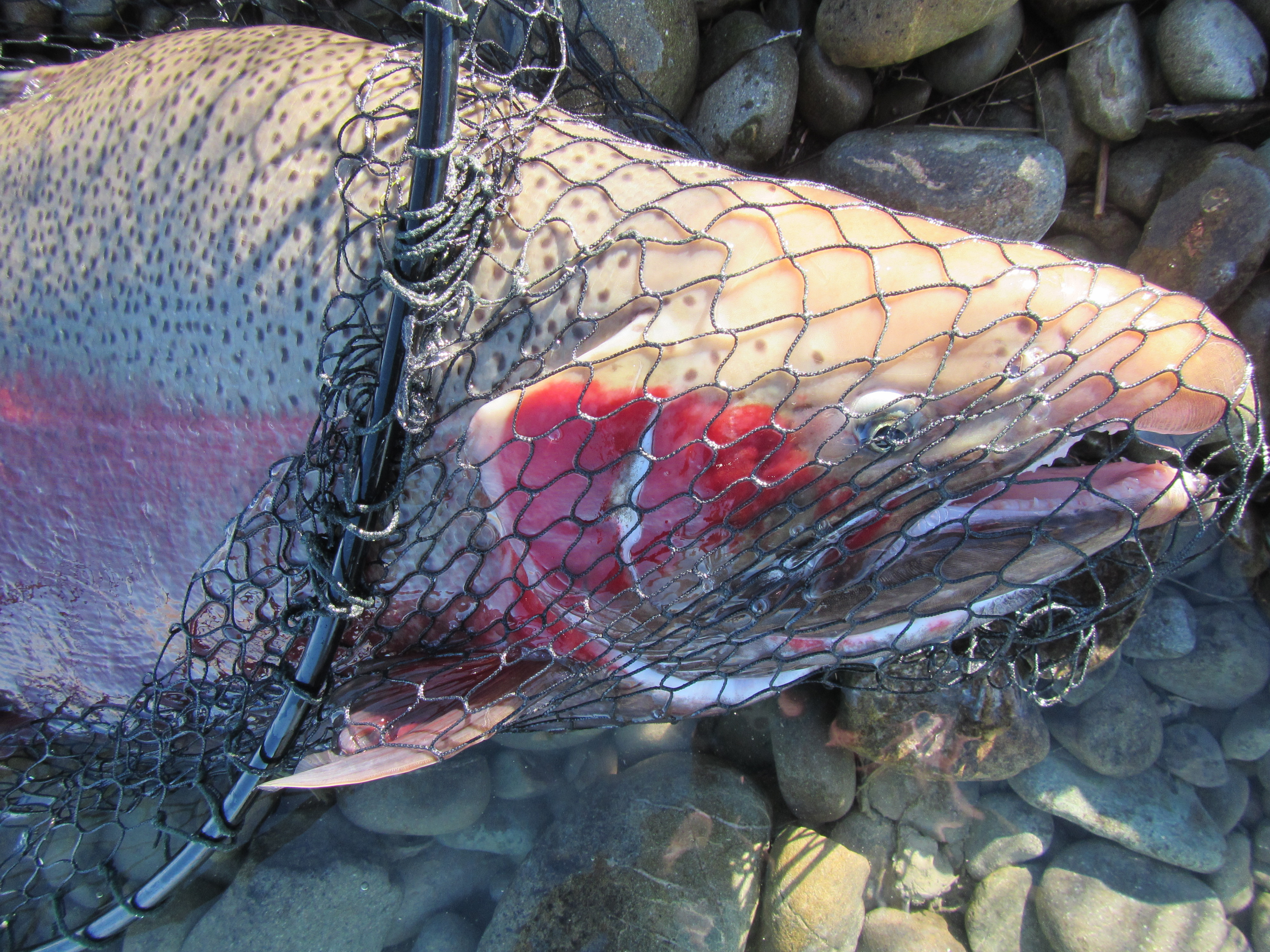 April 30 is always a bitter sweet day for me. Conflicting emotions and thoughts come crowding in as besides being the last day of the main fishing season, it just happens to be my birthday, something I don’t really celebrate that much at all these days! However, I’m cheered up by the prospect of a three month game bird season which I try to take full advantage of.

Right: A monster of a jack from last winter.

But what of the 2018-19 fishing season? Only a handful of anglers would claim that it was a bountiful salmon season. A few real troopers hung in there and reaped their just rewards but for many it was another disappointing season with poor, sporadic runs in most of the main rivers. By all accounts things were a little better further north but again, many anglers failed to land a single sea-run Chinook despite putting in many hours of effort.

From rumours I’ve been hearing, there may be some major changes afoot with regard to regulations in a last ditch attempt to improve salmon runs. I’m assured that some of the proposals look likely to provoke very vigorous debate so keep an eye out for news from your Fish and Game Council.

Stream trout fishing this season was heavily influenced by the weather. Big floods in South Canterbury streams pre-Christmas actually caused more physical damage than many realise. Talk about a changed playing field! The standout though was the fishing in the lower reaches of the Waitaki and Opihi rivers. I fielded reports of simply outstanding fishing from these two. Compare that though with a real scarcity of fish in many parts of small streams like the Tengawai and Waihi. I suspect that the big floods just pushed them out and when the drought kicked in they stayed in the bigger water.

I enjoyed some outstanding fly fishing through most of the summer despite the extreme temperatures by getting on the river early. The Opihi flows were maintained throughout thanks to a well filled Lake Opuha.

As the season wore on, Lake Opuha came into its own for browns cruising the edges. While not easy to fool, they were there in numbers. Lake Benmore also produced some marvellous fish for both boat and shore anglers.

With not a lot of options available here in the winter, many anglers turn to the canals. On the few occasions I’ve been there during the summer it has been a bit of a struggle – a few decent rainbows but a lack of consistency. Winter is when that can all change. If there is one quality the successful canal angler must possess it is patience, followed by a willingness to adapt. Just when I think I’ve finally ‘cracked it’ I end up with egg on my face. As I’ve often stated before there simply is no ‘best way’. Sometimes rolling imitation eggs of just one colour is simply deadly but two days later won’t even attract a nibble. On other days, especially around the salmon farms, shrimps are all the go but fail miserably on the next outing. Someone else will swear by a soft bait, another has enormous success on a Rapala. Then along comes a complete novice who pulls out a 30lb’er on a Tasmanian Devil or Hamills Killer. The list goes on and on. For what it’s worth here are a few hints and tactics that have worked for me and resulted in the capture of quite a few fish in the 30lb class last winter.

My best results came on calm days or when a gentle southerly followed a nor’west front. A good flow is far better than little or no flow. You do not have to fish near a salmon farm to catch big winter trout. Try to intercept them en route to the areas where they congregate for spawning. Use braid main line and fluorocarbon leaders. While many anglers go really light I compromise with 8 -10lb minimum. Go lighter and any fish you do land will be so exhausted it may not be able to be released.

By all means keep a fish or two to eat but be warned; any fish that is going a bit dark and is very deeply coloured will not even smoke up well. These fish are best released as they can actually be completely inedible.

With increased popularity comes the inevitable problem of conflict with other anglers. There is plenty of room up there so respect the rights of someone already ensconced. If everyone is rolling eggs it might be better to follow suit to avoid tangles or go somewhere else. Give an angler playing a fish some space. If you see someone clearly in breach of the regulations don’t hesitate to pass some details on to Fish & Game. Canal fishing is not to everyone’s taste but if you want to have a crack at catching a trout beyond your wildest dreams the chance is there...