Duck hunters are being urged to wear life jackets when hunting on waterways this game bird season, with water levels in some parts of the North Island still much higher than normal as a result of the recent storms which deluged the country. 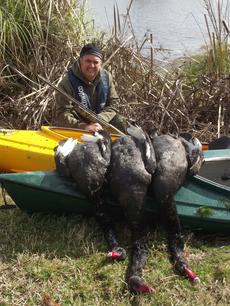 The game bird hunting season opens this Saturday (6 May) and the traditional event will see thousands of hunters venturing out on rivers, lakes, streams and into wetlands around the country.

In early April, Cyclone Debbie brought heavy rain and flooding to many regions and floodwaters still haven’t completely subsided in some regions, such as Bay of Plenty and Waikato.

Top right: A hunter's lifejacket doesnt have to be bulky.

“The amount of water around is phenomenal.  While water levels have been dropping, there have been places you could usually walk to which may still be inaccessible or only able to be reached by boat and some mai mais may be flooded.  At one stage, it looked like hunters might be shooting from the roof of their mai mais!” Mr Klee says.

“Always wear a life jacket when you are on the water and avoid overloading boats with mates, equipment and dogs,” he advises.

Water Safety’s CEO Jonty Mills says around a third of all preventable drownings over the last couple of years have occurred in rivers.

“We urge all hunters to use caution and make safety a priority. Assess the risks and look after yourself and others. We want all hunters to come back to their families this season.”

“The guy who sold me my first inflatable life jacket drowned while topping up his duck feeder in a flood.  He couldn’t swim and we spent a couple of days looking for him,” Mr Dyer says.

John Meikle is a Fish & Game officer in the Eastern region, which includes Bay of Plenty, Gisborne and Taupo.  He says hunters using waders to stay dry should always wear some form of belt.

“This can be as simple as a piece of rope tied round your waist but even better, use a shotgun cartridge belt round the outside of your waders.”

John Meikle explains that the belt creates an air pocket below your waist that allows you to float if you fall in.  He says there are other benefits as well.

“The belt also stops the cold water saturating your nether regions if you trip over and get a wee bit of a dunking.”

“The new inflatable life jackets aren’t cumbersome and don’t restrict your shooting, so wear them.”

Mr Hawker says large, shallow lakes like Lake Elsemere Te Waihora are a feature of Canterbury game bird hunting and hunters need to be aware of the particular threats they pose.

“While the lakes are shallow, there are deep spots and you need to watch your wading depth.  Debris on the lake bottom can also trip up an unwary hunter, while a strong southerly storm will create large waves which can be a real threat,” Mr Hawker says.

“It is easy to under estimate irrigation ponds as their calm water and machine-countered banks can make them look benign.  Hunters need to realise the water is deep and cold and the banks are steep.

“They should wear warm clothing and strong footwear to cope with the rocky, steep sides and ensure the ducks and retrieving dogs are the only ones going for a swim in the irrigation pond,” Mr Adams says.