Spring and now 'summer' continue to be a real mixed bag when it comes to weather and fishing prospects. 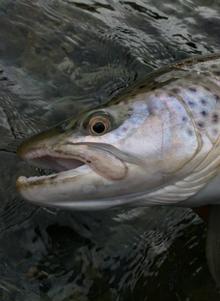 Look at the river flow data over the last four to six weeks and the graphs resemble a real roller coaster of peaks and troughs!

Those who have flexible work hours or are retired and have been able to get out when the flows are normal have been doing okay, though by accounts feeding activity is slower than normal at this time of year, probably because of the lower temperatures affecting invertebrate activity.

The Ruamahanga is leaving anglers with the normal state of confusion about "where have all the fish gone?" But the same thing happened this time last year and the fishing really heated up when the flows settled down.

People are saying they're not seeing fish where they normally encounter them too. The answer to that is: move around... lots.

Ruamahanga fish tend to school up. This means there are often long stretches that seem apparently barren but then when you do strike a fish, it is usually followed by others.

Just remember, a little legwork can go a long way on this river.

Pictured above right: A beautiful brown from the lower Otaki (Photo Hamish Carnachan)

The Hutt River has been fishing very well, with healthier flows and water temps than normal for this stage in summer; and the lower Otaki is continuing its stellar run of producing exceptional fish below the State Highway bridge.

The Rangitikei has been big with extra flow from all the rain more often than not, but when it drops it has been stunning, ditto the Hautapu!

A good fresh dump of snow on the Tararua Ranges in late January... 'summer'?

The upshot of the freakish weather we've been lately, including the heavy dump of snow on the ranges in late January, is the rivers are in excellent conditions. Good flows predominate, and the all important water temperature is lower than one might expect at this time of year.

This means the rivers are largely clear of the algae that can be a nuisance and all in all its good for insect life and makes for happy trout.

When the weather does eventually switch to summer - and that won't be far away- the fishing will fantastic.

In the meantime, hit the rivers at the right time - for instance, with levels falling after a fresh - and you should be into some great angling.
Weekly reports are where it's at

You'll get a lot more timely and useful information over the duration of the angling season from Wellington Fish & Game's weekly fishing report.

If you aren't already receiving it, but would like the email offering tips, live weather and river flow reports, an angling noticeboard of local events and much more, then contact Communications and Field Office Hamish Carnachan with a sign up request.