In the midst of one of the most densely populated areas of New Zealand, Wellington has a surprising array of fishing waters close at hand. Indeed Wellington is probably unique worldwide in having such quality brown trout fishing within a major city.

Scroll down below the maps for downloadable brochures. 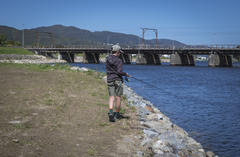 chasing sea run trout in the lower reaches of the Hutt River.

The largest of Wellington's rivers, it dominates angling interest. Access is easy with riverside parks or access tracks along most of its length. In general anglers’ fish “blind” and cover the water rather than fish to sighted fish.

The time for spinning is either early season (particularly if the water is slightly discoloured) or late in the season when trout become aggressive leading up to spawning. Alternatively, try a large weighted nymph such as a size 10 or 12 hare and copper. As water temperatures rise, fish smaller patterns. A small wet fly drifted across the tail of the pool is a favoured method during summer. Mornings or evenings are prime times in the summer. After dark, try a sinking line, Taupo-style lure and search the depths.

The river rises in the Rimutaka Range to flow south to the township of Wainuiomata and then out some 20km to sea. Access is off the Wainuiomata Coast Road and landowner permission is required. Unlike other rivers in the Wellington area, this river, managed as a “trophy” brown trout fishery, provides a real challenge to anglers. Slow flowing, with high banks and little streamside vegetation, it's not difficult to spot the many trout as they cruise lazily near the surface and in backwaters but hooking them is another matter. Most general nymph patterns work, though they should be small (sizes 14-18). Fish will take a dry fly throughout the season, mainly on warm days and in the evening. Bushy patterns such as the Molefly or deer-hair sedge are the favourites at night. Don’t forget the wet fly, either a small hackled wet fly fished in the surface film during the hatch, or larger patterns fished at night. Most of the best fishing is in the middle to lower reaches.

Flowing from the southern Tararua Range the Akatarawa is a tributary of the Hutt River, joining it at Birchville. Access is either at the Hutt River confluence, where there's public access along the river to the West Akatarawa River, or, off the Akatarawa Road upstream of this junction from which, landowner permission is required both to and along the river. One of three ‘mountain stream’ type rivers it is a clear, swift flowing river carrying a moderate number of fish especially earlier in the summer. The narrow Akatarawa Valley confines the river to a restricted channel with tight rock-walled gorges, restricting access for anglers at several points. The highest fish populations occur in the two open areas of the valley at Karapoti and Cloustonville. These reaches have a high proportion of boulder-run habitat that provides excellent fly-fishing. In the main this is a lower density trout fishery. The clear waters assist fish spotting and anglers usually sight fish. Nymphs should be weighted as much of the water is fast flowing.

This river has its headwaters in the Rimutaka Range, and flows north under SH2 to join the Hutt River at Kaitoke. Access on the Rimutaka side, is from the Rimutaka Incline Walkway. Transport within this reach is by foot or cycle with the track closely following  the river for a number of kilometres. The river is confined within a narrow valley and there are regular deep pools where the water flow cuts in against rock bluffs. Fish are few but relatively easy to spot in the clear water in very peaceful, attractive surroundings. In the vicinity of SH2 the river is open, comparatively unstable, with very few fish. Downstream from Waterworks Road, Kaitoke, access is easily gained from the Kaitoke Regional Park to, initially, an open river with few pools, which quickly enters an impressive setting of native bush and rock bluffs. There is a moderate population of good-sized brown trout in deep pools and bouldery runs which provide plenty of cover for fish.

This river's headwaters are on the western flank of the Rimutaka Range immediately above Upper Hutt. Access is off SH2 to Maymorn and Mangaroa, or from central Upper Hutt at Wallaceville to Whitemans Valley Road. Apart from the first 2km upstream of the mouth to Maymorn there is no public access – landowner permission is required to get access to and along the river. Renowned for it’s free rising trout, the Mangaroa fishes best early in the season when a number of Hutt River spawners are still loitering before returning to the Hutt. For later season fishing there is a healthy population of resident fish in most areas of deep water, though high water temperatures and nuisance algal growth, inhibits fishing. The lower reaches are distinctively stained from the large Te Pango swamp, making spotting fish difficult. South of the Wallaceville Hill Road, the river is clear but fish are not as plentiful as in the stained reaches downstream. Trout rise freely during the evening and can be taken on most general fly patterns in size 12 or 14.

The Whakatiki, across the Hutt River from Upper Hutt, is a quality mountain stream fishery. Access is either by crossing the Hutt River at the confluence off SH2, giving reasonable fishing for about 1km before entering a tight gorge or via Moonshine and Bull Run roads. A locked gate prevents vehicle access directly to the Whakatiki but it's only a walk of several hundred metres along the Wainui Stream to reach the mainstem. While carrying only moderate numbers of trout, the impressive surroundings, deep clear pools and bubbling runs bordered by steep bush-covered slopes amply reward the adventurous angler prepared to walk a bit for their fishing. Relatively inaccessible, the Whakatiki is really day-trip type fishing. Move quickly, fishing to visible fish rather than carefully covering all of the water. Spin and bait fishing are impractical leaving fly fishing as the best method.

Small streams abound in the rugged Wellington landscape. Waters such as the Makara (access is either through Karori to the middle reaches at Makara or Ohariu to the lower reaches), Korokoro (off SH2 opposite Petone), and Pauatahanui (access off SH2 over Haywards Hill or via Paremata to Pauatahanui), all provide interesting fishing that attracts a small number of anglers. Don’t expect large fish and numbers can vary from year to year. Early season is better as the warmer conditions of summer tend to make fish sluggish and angling difficult. A small nymph, dry fly or even a worm drifted through the small pools will usually bring an enthusiastic take if conditions are right.

This lake is just off SH1 at Paremata that leads through to the suburb of Whitby. It is small and contains a healthy population of perch and tench. Coarse fishing is an art of its own. It's not a matter of adapting your spinning gear, putting on a weight and dropping it in the water. Contact the very helpful guys at the Hutt Valley Coarse Fishing Club for some tips.