Please be aware at all times of local and national regulations to ensure the safety of others and the sustainability of game bird hunting. 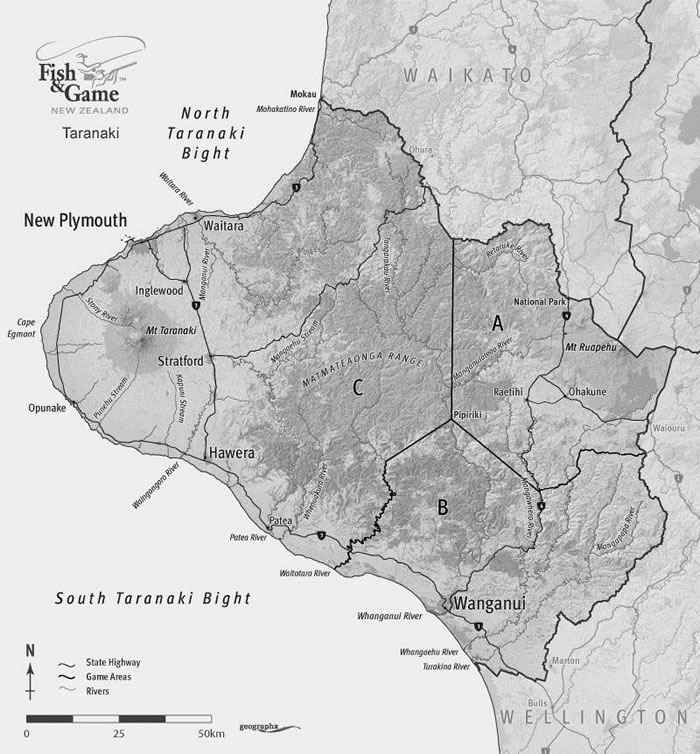 The Taranaki Region has many rivers, streams, creeks and ponds that provide good habitat for waterfowl. This translates into consistently good shooting and Taranaki hunters are among the most successful in the North Island.

Mallard duck is the predominant game species, accounting for some 56% of all waterfowl harvested. Mallard and grey numbers are looking good for the 2021 game season, thanks to a wet spring and summer, which kept wetlands well topped up and provided good conditions for brood rearing. In addition to the traditional pond and lake shooting from maimai, jump shooting along streams, rivers, drains and farm oxidation ponds will be productive. Good evening shooting can also be had on farm dams, stubble fields and in paddocks where supplements are being fed to stock.

Paradise shelduck are widespread throughout the region and they make up about 38% of the waterfowl harvest. Whilst numbers of paradise shelduck in the Whanganui and Waimarino areas are at the lower end of their long-term average, counts around the ring-plain are strong and parries will provide good hunting on stubble fields, areas of new grass, recovering hay paddocks and ponds and lakes used as loafing areas. A 10-bird daily bag limit for the whole of an eight-week season starting 1 May has been set for all parts of the Taranaki Region in 2021.

Pukeko are widespread throughout the region and farmers will welcome a harvest of pukeko from wetlands adjacent to maize growing or other cropping areas, where they can cause damage at planting time. The season length for pukeko runs through to the 29th of August, with a daily bag limit of 10 in Area C and 5 in Areas A&B, to give hunters time to undertake pukeko drives after the end of the duck season.

While there are few public hunting areas in the Taranaki region, there are plenty of places to hunt waterfowl on private land - it’s simply a matter of asking landholders for access. Once a hunter establishes a record of responsible behaviour, there is usually no problem obtaining permission to hunt in subsequent seasons.

This great game bird area has a large number of farm ponds, which, in conjunction with grassland and cropping areas, provide good shooting for paradise shelducks and mallard ducks. Numbers of parries have stabilised in the Waimarino after a decade of decreases and pastoral farmers and vegetable growers will welcome their harvest from areas of new grass and crops.

This area contains more than 1,500 lakes, ponds and wetlands – the majority on private land. Fewer landowners are hunting these days and licence holders who are prepared to contact farmers to ask for access should have no difficulty in obtaining a place to hunt.

Mallard and grey duck populations are in good heart as a result of a productive breeding season and after the traditional opening weekend pond shooting, ducks will seek refuge on the region’s many streams, rivers and farm oxidation ponds where jump shooting, or morning or evening shoots will be productive.

Paradise shelduck are also at good levels on the ring plain surrounding Mt. Taranaki and mobs will congregate in paddocks where supplements such as maize silage are being fed to stock and on areas of new grass and recovering pasture.

A special season for paradise shelduck has been held in the Taranaki provincial area in recent years. Please contact the Whanganui or New Plymouth offices of Fish & Game NZ in early February for details. To participate in the 2021 special season hunters must hold a 2020 game licence and obtain a permit. A $5 administration fee applies to all hunters, except those occupiers who hunt on the land they occupy.

Scattered populations of pheasant and California quail are present in coastal sand country, in pine plantations and in areas of bush and scrub, such as those adjacent to streams and rivers and in sheep and beef country.

Most of these areas are on private farmland and the appropriate permission should be sought. Favourable breeding conditions in recent years have meant that areas of good habitat are currently holding reasonable numbers of pheasant.

Permits are available free of charge from the Whanganui office of Fish & Game for upland game hunting in Harakeke Forest and Nukumaru Recreation Reserve.