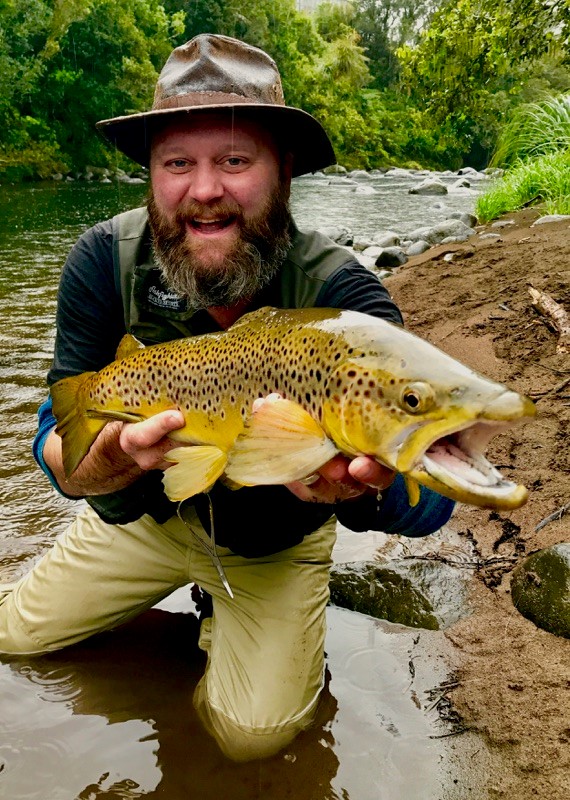 Taranaki Fish & Game staff are predicting a good start to the new fishing season when it gets underway on Thursday October 1, 2020.

This winter and spring have seen no large, damaging floods and instead we’ve a regular series of minor freshes that have maintained base-flows and helped scour out accumulated streambed algal growth.

Trout are now in feeding mode as water temperatures rise and fish are looking to recover condition following spawning.

Right:  Kymon Hill with an opening day catch on the Taranaki ringplain.

Current conditions will suit the fly fisher using weighted tungsten and gold bead nymphs to get down to the fish.  A two-nymph rig should also work well.

Spin fishing with toby, rapala and bladed spinners will also take fish in the larger river pools, while bait fishing with creeper, worm or soft baits will be productive in waters where bait is permitted.”

Rivers such as the Waingongoro in south Taranaki hold good numbers of brown and rainbow trout and the Patea River in the reach between Stratford and Toko will also produce some nice fish.

The Waiwhakaiho and Manganui rivers in north and central Taranaki will be well worth a visit.

If rainfall makes the river conditions unsuitable on opening day, then fishing in lakes Ratapiko, Rotomanu and Mangamahoe (fly fishing only) will be a good option. 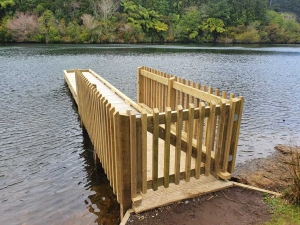 The Lake Mangamahoe casting platform is now ready for action.

A new casting platform at Lake Mangamahoe will make it much easier for flyfishers to cast to trout cruising in deep water.

The platform is the second to be built on the lake and is a legacy project funded by the North Taranaki Rod & Gun Club and built with Fish & Game voluntary labour.

We’d like to thank Trustpower Ltd. who own the lake and NPDC for permission to site and build the casting platform. 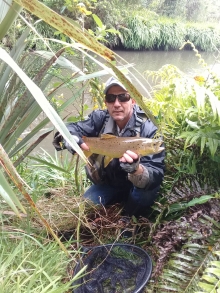 Timberco supplied the materials for the platform and Neville Kemp from Kemp Trucking drove in the piles for the foundations. Volunteers Graeme Patten, Alan Flynn and Mike Kemp helped with the build.Andy Fraser from RedJacket Engineers kindly donated the design drawings and our volunteer project manager, Curly McEwen has put the project together as time permits.

Lake Mangamahoe is the region’s most popular lake fishery and is also the region’s only fishery that is restricted to fly fishing only methods - as has been the case since its inception in 1933.

Lake Mangamahoe has a population of wild brown trout sustained by natural spawning and it receives annual releases of around 300 rainbow trout that are raised by volunteers at Fish & Game’s Hawera trout hatchery.

The trout grow into well-conditioned fish of 2kg or more.

This year’s family trout fishing event will be something different. Instead of the fish being corralled in a holding net, 400 good-sized rainbow trout will be released into the lake and families will be invited to bring their fishing gear to fish anywhere round the lake.

The Inglewood Rod, Gun & Recreation Club and Taranaki Hunting & Fishing will be on-site in the club’s marquee tent near the boat ramp to help with gear setup, lures and bait.

Volunteers will also circulate round the lake to help out and provide advice.

Anglers are asked to register on arrival so that they can be covered by a Fish & Game permit that will allow them to fish at Lake Rotomanu for the rest of the season.

The event is scheduled for Saturday October 31, 8am – 1pm, with Lake Rotomanu closed to power boats during that time so anglers can have exclusive use.

Lake Rotomanu is located near the Waiwhakaiho River mouth in Fitzroy, New Plymouth.

In addition to rainbow trout, the lake holds a good population of perch up to 1kg or more.

Perch are a white-fleshed species which make great eating.

Taranaki Fish & Game is again running an angler diary scheme to collect information on river and lake fisheries in the region. Anglers who are keen to participate can contact Fish & Game at Taranaki@fishandgame.org.nz

Licences for the 2020/2021 fishing season are available either online through the Fish & Game website http://www.fishandgame.org.nz/licences or at your local fishing store.

There are 10 different fishing licence categories available including the Local Area Licence which is perfect for New Zealand residents who only fish their home region.

The Loyal Senior Licence is for the long-time older Kiwi angler and the Short Break (three-day) and Long Break (nine–day) licence are perfect for holidaymakers.

Of course, the premier licence remains the Whole Season licence, which allows the holder to fish anywhere in NZ except the Taupo trout fishery run by the Department of Conservation.

Please check, clean and dry any clothing, equipment and fishing gear before moving between waterways to help prevent the spread of didymo, lake snow and other freshwater pests.

While didymo hasn’t been found in the Taranaki Fish & Game Region to date, not all catchments are tested, and the only safe option is to act as if the water you are fishing in has didymo, but the next one you’ll visit, does not.

For more information go to: