As we head for the hottest January since records began, local anglers are still having good success by fishing in the morning before the heat of the day kicks in, and by fishing during and on the tail of freshes.

Even minor freshes can drop water temperatures by three to six degrees, and trout take advantage of cooler water and an increase in drifting food supply by feeding up large.

Malakai Martin-Capper proudly shows off a brown trout he caught during a recent fresh in the lower Waiwhakaiho River (photo Les Martin).

Fortunately, after a very dry November and December, there have been several freshes so far in January and the extended forecast is for more of the same.

This means that to date, Taranaki has escaped the extreme temperatures and trout deaths that have occurred in lowland streams in some parts of the country.

The abundance of riffles in our mountain streams provide very good re-aeration, and it is rare to find reduced oxygen levels in our waterways.

It also means trout will seek out the well-aerated riffles and with cicada now beginning to emerge in numbers, an imitation drifted through riffles and pocket water in the middle and upper reaches of streams may well bring success.

Anglers have also been having fun stalking trout cruising the margins of some of our local lakes, such as Lake Mangamahoe.

The trout have generally been targeting waterboatmen and a small nymph cast well in front of cruising fish can be the way to go. 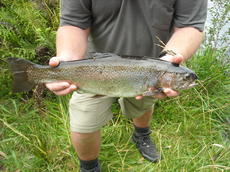 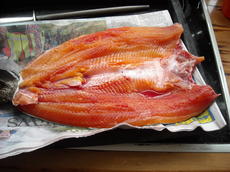 Please check, clean and dry any clothing, equipment and fishing gear moving from one waterway to another.

Help prevent the spread of didymo and other freshwater pests. The Taranaki region is fortunately didymo free, so let's keep it that way.