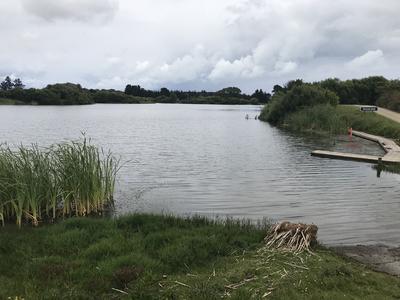 Fishing is most productive over the warmer months, particularly early or late in the day.

Popular spots include the lake edge at the ski clubrooms (where you first arrive at the lake) or at Scoutland’s beach (at the end of the tar-sealed road around the lake).

A ramp is available for boat launching, although it is generally best to avoid peak times as jet and water ski enthusiasts also use the lake.

Located adjacent to Lake Wiritoa, this secluded lake also supports a productive fishery for good-sized perch and is a good alternative when water skiers are using Lake Wiritoa.

To access the lake park at Lake Wiritoa in the vicinity of the last houses along the northern shoreline, and cross the fence using the style beside the Lake Kohata sign.

It is a 10 minute walk along the fence line to the lake and access is easiest along the low-lying eastern shoreline.

Anglers can walk right round the lake, but must stay within the reserve boundary, located 20 metres from the water’s edge.

Bait fishing, or spinning with similar lures as for Lake Wiritoa is recommended.

Casting wet flies using flyfishing gear, or with spinning gear and a bubble float can also be effective.

Fishing is generally best in the deeper water out past the weed beds. 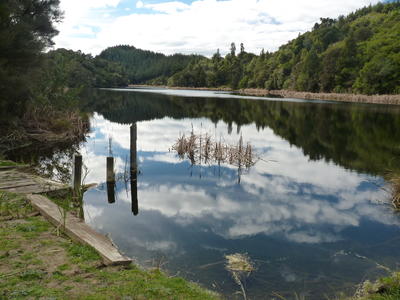 Angling access to this special lake is generously shared by the owners – please respect their conditions of access which include no camping and no dogs.

This pristine and picturesque 13-hectare lake is located on private property 14 km west of Hunterville on Turakina Valley Road.

The lake is stocked annually by Fish & Game and contains good conditioned rainbows up to 2kg.

Angling access is generously provided at the goodwill of the lake’s owners; however the lake is closed to the public over December and January.

The jetty is private and if the owners do visit while you are fishing please allow them to use their own facility.

Outside of December and January walking access for fishing only is generally available.

The best fishing tends to occur over the winter months however it can be good at any time of the year.

Fishing access from the shore is limited so most fishing is from the several dinghies stored in the boat shed at the lake.

These dinghies which belong to the lake owners or Manawatu Freshwater Anglers Club (blue dinghy) are available for use along with the oars which have been generously donated; however you must bring your own life jackets.

Please remember though that small boats are easy to fall out of or capsize so take care if standing and always wear a life jacket.

Trout are more often deep in the lake, particularly in summer and a popular technique is to harl (troll) around the lake using a sinking fly line and lure.

Casting a nymph or lure pattern along the edge of the weed beds can also be very effective, as is spinning using a toby, z-spinner or other common lures.

To visit from Wanganui drive south on SH 3 before turning left into Turakina Valley Road, just north of Turakina.

Follow this road up the Turakina valley until you come to the intersection with Mangahoe Road.

You then have a choice of continuing left up Turakina Valley Road (metal and winding), or going right on Mangahoe Road toward Hunterville, then turning left onto Ongo Road at Rataiti and left again at the “T” junction back down Turakina Valley Road.

It is then a 20-minute uphill walk along a good farm track following the blue markers.

Located a 30 minute drive up the Parapara Highway (SH4), the lower Mangawhero River holds a surprising number of brown trout averaging 1.5 kg, though some fish are much larger.

The river has plenty of attractive angling water, however is best fished during dry spells when it is relatively clear.

State Highway 4 runs alongside the Mangawhero River for much of its length, providing ready access points above and below the spectacular Raukawa Falls at Kakatahi.

The adjacent land is nearly all private property so please seek permission before crossing. S

pinning is preferred, often using an easy to cast lure like a toby or z-spinner given the size of the river through this section, while bait fishing with a worm is also effective. 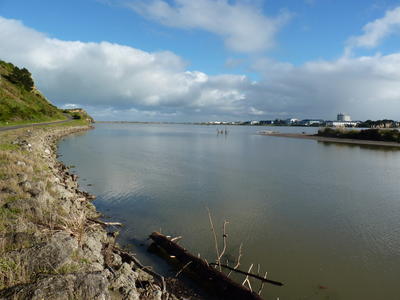 The Whanganui River attracts a significant whitebait run over spring, and not surprisingly each season several large sea or estuarine run brown trout are caught within the Whanganui City limits.

Even the occasional salmon and rainbow trout have been caught near the river mouth.

Most are caught as a bycatch by anglers fishing for kahawai (or netting flounder) reflecting that this fishery remains an unexploited opportunity.

Over spring trout can often be seen cruising the shallows and recommended techniques include dead drifting a whitebait type fly using either a fly rod, floating line and indicator cast up current or spinning rod with a bubble.

The idea in this case is to imitate a dead whitebait drifting passively near the bottom.

In shallow quiet water leaving the fly stationary on the bottom and then giving it a couple of twitches when a cruising trout is several metres away is often enough to stimulate a strike.

Often less is more and having caught the trout’s attention then letting the fly settle again rather than continuing to move it tends to prove more effective.

Alternatively swinging a streamer type fly across and downstream is another option. In this case use a sinking leader or split shot to help counter the effects of the current and get the fly down.

Another effective option is small (50 – 75mm long) lightly weighted softbaits or spinning with easy to cast, slim lures like tobies. 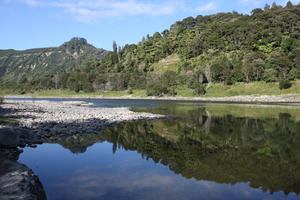 The Whanganui River below Pipiriki is often discoloured which puts anglers off. However in particular during low flow conditions over summer, there can be good fishing for brown trout which often accumulate around any small inflowing stream mouth.

When the river is low it has good clarity and a lot of character with very defined pools, runs and rapids amidst a scenic setting.

Much of the water is easily covered from one or other bank and the exposed gravel bars provide ready access.

The river can have lots of large woody debris in places though at low flows this is usually obvious.

It is nevertheless inherently a big river through this section and spinning with easy to cast lures or soft baits is most popular.

However at low flows diving lures like rapalas become more of an option to fish the short deep pools and the exposed gravel bars also make for easy fly casting, either drifting a weighted nymph or swinging a wetfly.

Alternatively bait fishing with a worm drifted through the pools and runs can also be effective, especially when the river is a little discoloured.

However the river does have a very large tuna (eel) population and a bait left sitting on the bottom risks catching one of these.

Access is via Kaiwhaiki Road in the lower reaches and Whanganui River Road which runs along the true left bank for many kilometres up to Pipiriki.

However particularly in the upper section the river is often still a long way below the road. In places the river can be accessed directly from the road though often reaching the best or most easily fished water requires crossing the adjacent paddock.

In this case it is just a matter of asking for permission at the nearest house.

Note that the Taranaki Fish & Game boundary crosses the river just downstream of the confluence with the Ohura River approximately 25 km southwest of Taumarunui.

Upstream of this point Auckland/Waikato Fish & Game regulations apply and the fishery becomes much more dominated by rainbow trout.