Thumbs up for region's hunters

Fish & Game had three ranging teams out in the field on Opening Day this year, concentrating on private land around Blenheim and Murchison. 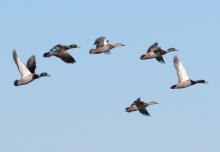 On the whole, hunters were in good spirits despite the general lack of birds, and nearly everyone checked was found to be licenced and using steel shot.

One hunter was found to be hunting using lead shot within 200m of a water body, and issued with an offence notice.

Staff were ranging with assistance from Nelson Police, who were there making sure hunters were licenced and in a fit and proper state to hunt (no alcohol!). Pleasingly, as is often the case, hunters in Nelson / Marlborough set a fine example and no serious breaches were encountered.

Above: Areas around Murchison and Blenheim were the focus for rangers on Opening Day. Staff were pleased with a high level of compliance.

The Magnificent Seven is a new social team hunt where participants head out over the weekend and try and bag one each of species available to hunt in the region.

The hunt will begin on Friday afternoon and end with a ‘weigh in’ and prize-giving on Sunday afternoon in Richmond, where we will have complimentary wild game food put on by a local chef.

The team with the most points will go down in history as the first team to win the coveted ‘Magnificent Seven’ trophy!

There will also be a prize to the team with the most pukeko (but not exceeding daily bag limit per person).

Teams need to register by 15 June. Contact the Nelson Fish & Game office by email or phone to register. Teams can be up to four people. You can also register as an individual or pair and we will put you with a group.

The Golden Bay Hunt is a great two day hunt based on public and private land in the Farewell Spit/Westhaven Inlet area. Last year we had over 100 hunters participate either in teams or as individuals. The aim is to offer some fun hunting in a highly appealing area you may not have spent much time in. Again, please contact F&G for a copy of the registration form.
Reports from Opening Week

Fish & Game staff have had ears pinned to the ground hearing of hunters’ success over Opening Week, or in some cases lack thereof.

In typical Top of the South clear skies and warm temperatures, hunters ‘braved the elements’ on Opening Day, donning sunhats and applying generous doses of sunscreen.

Many have suggested it was the warmest Opening Day ever with most regions experiencing temperatures over 20 degrees!

To summarise, its fair to say there was some solid shooting to be had in Marlborough – with good bags coming off the Wairau Lagoons and on ponds around Blenheim, despite the fine conditions.

It was also pleasing to hear that Para Wetland shot well in the middle reaches. Fish & Game rangers in Marlborough noticed there were a good number of unoccupied ponds with ducks in residence around Blenheim.

So for those of you on the hunt for a new Opening Day spot – get a bird’s eye view of your area using Google Earth – and get door knocking!

Tasman, Murchison and Golden Bay were much quieter, with many hunters having low to mid-sized bags of mallards, and the mainstay that is the paradise duck was noticeably absent in some areas, where they’re often the ‘bread and butter’ of a hunter’s bag.

Ironically, this was despite higher parrie numbers in Tasman. On farms where a good source of food was present, such as maize crops, new grass or grain – birds were concentrated and provided good parrie hunting.

Right: Marcus Girvan, Joe Martin and Fonzy had success on opening morning.
Send us your contacts!

We use our database for email records as well as post information on social media, but if you want to be advised of news and upcoming hunts, and you don’t think you’re on this list, let us know how best to contact you.