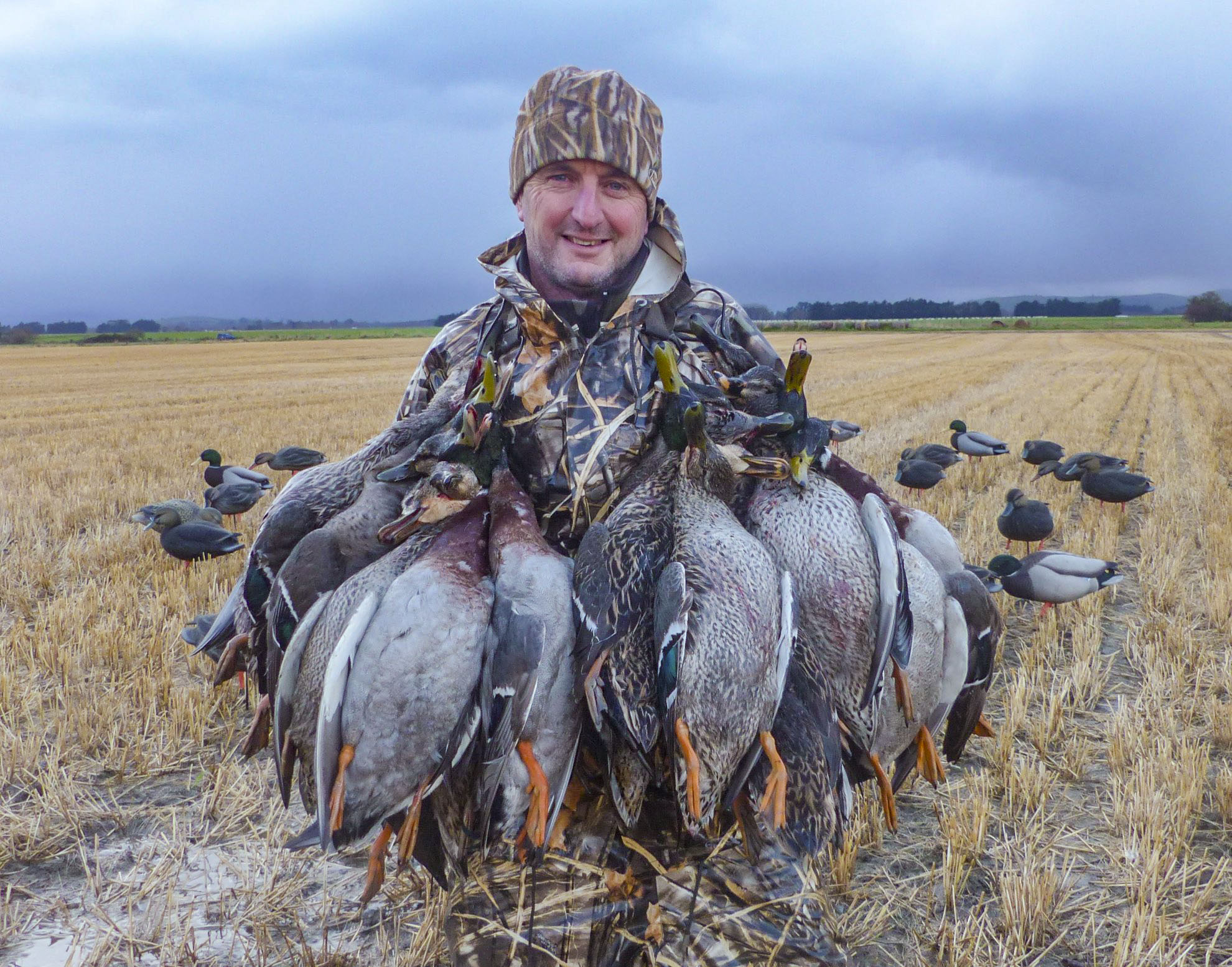 A common saying amongst anglers is that 90% of the fish are caught by 10% of the fisherman - similar is true for hunters.

There are a group of very knowledgeable waterfowl hunters, and they can effectively harvest mallards throughout the season, no matter the conditions.

One of the key reasons they are so successful is that they have a thorough understanding of mallard behaviour.

They appreciate that the behavioural patterns of mallards are not necessarily consistent from day to day let alone throughout the season; they understand that mallard behaviour will vary from place to place even within the Southland region and, that mallard behaviour is influenced by a variety of environmental factors.

One passionate Southland hunter and former Southland Fish & Game Councillor who has spent his life studying the behaviour of mallards is Paul Stenning.

As I am by no means one of the top 10% of waterfowl hunters, I recently took the opportunity to interview Paul to glean some of his knowledge.

I thought there might be a few Southland hunters who would like to hear what he had to say.

Above Right: Paul Stenning is a passionate Southland waterfowl hunter and has been studying the behaviour of Southland mallards for over 40 years.

•       First of all, could you explain why it is important for hunters to understand mallard behaviour?

Although the obvious reason initially might be to have more opportunities to hunt and successfully harvest mallards, it can also make better use of your time and resources.

If you have limited places to hunt it can allow you to hunt those places in the conditions and at the times you are likely to be most successful.

For some, it might just mean less time away from family and other responsibilities or it might be that you are hunting on a limited budget with such things as fuel prices impacting your ability to go hunting and you want to maximise your chances when you do go hunting.

•       Has mallard behaviour changed during your years of hunting waterfowl in Southland?

Yes, very much so. The change in agricultural practices from predominately mixed sheep, beef and cropping to large-scale dairy farming has resulted in totally different mallard behaviour compared to forty years ago.

Land-use change has altered the places mallards live, where and when they feed as well as what they feed on.

It has also led some hunters to think there are not many mallards about when in fact there are plenty, but just not in the places or at the times they used to be.

•       How does mallard behaviour vary from May to June to July?

In terms of behaviour dictated by food, at the start of May, we generally haven’t had our first big rainfalls of the autumn/winter which make invertebrate foods from pasture i.e., worms/grubs readily available.

During this time, mallards are more reliant on seeds/grain.

This could be a natural seed from wetlands but is predominately grain coming from agricultural practices like stubble paddocks and supplementary feeding i.e., whole crop silage.

Mallards will congregate in the areas where these foods are available.

By mid-June through to July, farming practices will have changed with dairy herds being dried off and the stock moved all around the province to winter crop or strip grazing paddocks.

The winter rains will have also arrived, so mallards switch to feeding on invertebrates that are made available in the wet, muddy ground.

There are also innate behavioural changes that occur over the course of the season.

Early in May mallards are more gregarious and like to gather in large groups, especially on bigger water bodies.

Later in the season, as pair bonds form, mallards disperse into smaller groups or pairs and will utilise a variety of habitats including small ponds, streams, creeks, and ditches.

•       How do climatic factors such as heavy rainfall and hard frosts affect the behaviour of mallards and where do you find them? 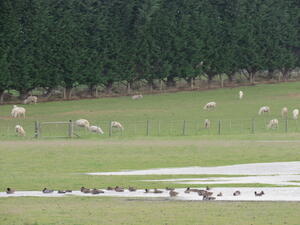 Hunters need to take advantage of sudden changes in climatic factors, such as the arrival of rain after a sustained dry period.

Any extreme weather event or sudden climatic change will change feeding and flight patterns, especially after a prolonged period of consistent weather.

Hunters really need to take advantage of this as mallards are most vulnerable when looking for new feeding or roosting options that become available after these events.

For example, the first heavy rain that causes surface water after a prolonged dry period will have mallards flying around looking for new worm-rich feeding grounds.

Likewise, strong winds will move mallards off big water bodies or the sea as they seek out sheltered water.

An extended period of dry weather will also have ducks changing feeding locations and times.

With the prominence of dairy farming in Southland, there are ryegrasses that are palatable to mallards and the ducks are quick to use these when ground conditions dry out and invertebrate food becomes less available.

With the ground frozen, mallards will feed more in waterways, especially flowing water that does not freeze. 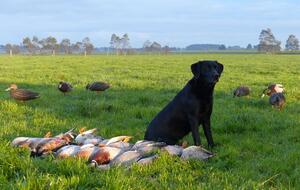 Ryegrasses are a good food source for mallards, particularly when the ground is dry.

Tidal water estuaries can also be very productive during extreme frosts because they will not freeze up so will still provide food.

Traditionally in Southland, we have called a pond a night pond if the mallards fly in during the evening to feed overnight and leave in the morning to go to a day roosting spot.

In contrast, a day pond is one where the birds return after their nights feeding to spend the day.

Due to changing agricultural practices, these terms have become rather blurred.

For example, if mallards are feeding on paddocks behind dairy cows, they will fly into paddocks to feed in the morning and might not return to a resting pond till late morning or even the evening.

As such, what might have been a morning pond could see no activity in the traditional morning flight times.

Evening flights have also changed and in some cases become non-existent especially early in the season when cows are still being milked.

Instead of flying to feed in the evening, mallards will sometimes now fly mid-afternoon to feed in paddocks after cows have been taken out for milking.

Sometimes they fly out at random times to take advantage of feeding opportunities i.e. when a farmer is feeding out a whole crop.

Early in the season, the moon may not have a lot of influence on mallard behaviour, especially if it is dry, because mallards will take any opportunity to feed and put on condition.

However, later in the season, when ground conditions are wet with surface water, there will be an abundance of protein-rich invertebrate food.

Mallards will quickly put on condition so will not have to take any risks to feed.

This is when they will use the moon to fly around and feed which greatly reduces their activity during hunting hours.

So, unless there is a weather event as discussed previously, we are best to focus our hunting efforts on the new moon period.

•       Do seasonal variables influence how you call? Does your calling change through the season?

As mentioned previously, mallards are very sociable early in the season and are always looking for other ducks and feeding opportunities.

Later in the season, when mallards are in better condition so take less risks, and are more pair orientated, I do very little calling and focus on being in the right place at the right time.

This will change if we have a weather event that displaces mallards or changes their feeding patterns.

They will be looking for other ducks so calling is a must.

So, in short, if I am hunting mallards that are locked into a pattern, I do minimal calling, but if I have conditions that have ducks changing their behaviour, I will call a lot more.

•       How important is it to consider these variables before a hunt and could failure to consider a key variable influence the outcome of a hunt? 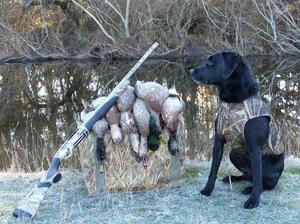 It has certainly become more important now than in the past.

For example, a wet and rainy day was always considered a good duck hunting day but if you are hunting a pond (or any waterway), a wet rainy day will mean the mallards go out to paddocks to feed on worms.

As such, the ideal conditions to shoot a pond is a dry day preferably with some wind and no moon.

Even a frosty morning is better for pond hunting compared to a rainy day, as frozen paddocks are not ideal for mallards to feed on.

Finally, having a good understanding of the variables that influence flight times can have you hunting when you are more likely to be successful!

Posted in Hunting, Both Barrels; Tagged Hunting Posted 8 months ago by Default Admin