The extra rain we received in November and December meant our later nesting mallards fared well to have a very productive and successful breeding season.

Above right: Ducks enjoying a nice backwater during our annual mallard count.

On average, they're double what we consider a more ‘normal’ year, which suggests we should have a very successful harvest this season with plenty of naïve juveniles around.

This is due to the lag between when our regulations are made (early December) and when we do our annual count (March).

In early December, our brood counts (focuses on fledging broods) were suggesting poor to average survival, following on from a poor 2018 season with our lowest harvest on record.

The game bird season in Southland has also been shortened this year by a fortnight, ending on July 14th.

This is due to the overwhelming response from hunters who feel it's unethical to be harvesting birds which are starting to pair up and breed.

On the other hand, the bag limit for swan has been increased to five swans per day.

Hopefully this will encourage some hunters to get out and target these challenging game birds. 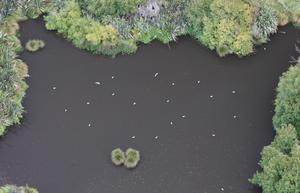 What old faded decoys look like from the air.

I know we mention it every year, but if I had a dollar for every bleached decoy left on a Southland pond, I would be a millionaire!

During our annual mallard flights we see countless ponds with lifeless faded decoys still laid out from the previous season or two.

Ducks have great eyesight and can see these from a mile away.

Further to this, when it's a still day and there's no movement in among your decoys, birds will flare before you can spell L-I-F-E-L-E-S-S.

This is also one of the reasons why the harvest is greater on a windy opening!

We look forward to catching up with many of you while we are out and about, good luck and be safe out there this Opening Weekend!