Southland trout fishing season off to a great start

Despite some rain and elevated river flows during the first few weeks of the new fishing season, there has been some great trout fishing on offer around Southland.

Rivers to the north and west of the region have been fishing particularly well as river conditions have remained in good order.

Right: Jack Fowler caught his first trout, on his first cast on the first day of the season! 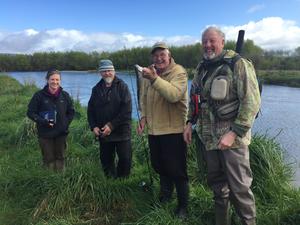 Fish and Game Ranger Erin Garrick with a bunch of happy anglers on opening day.

On the opening day of the sports fishing season, Fish & Game staff conducted angler licence checks on the middle reaches of the Aparima River, the Oreti River and the Mavora Lakes.

It was great to see many anglers, including family groups, making the most of the opening day which happened to coincide with the school holidays.

All fishing methods were working well but bait fishing with a worm in the deep holes of the Aparima River was particularly effective.

As we move closer to summer, the fishing will only get better.

For example, November is a great time to target trout in the tidal areas of our rivers due to the arrival of smelt.

Trout will actively seek out smelt and if anglers use a smelt-like soft bait or feathered lure, there is a great chance of success. 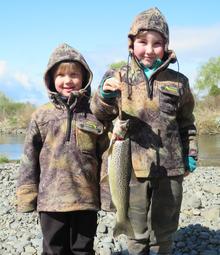 Good spots to target trout which are feeding on smelt include the lower Mataura River near Gorge Road or the lower Oreti River near West-Plains Road.

For the fly anglers, small pheasant tail and hear and copper nymphs (size 16) are currently working well in our smaller streams and rivers.

However, as things get warmer, terrestrial insect life will start to proliferate.

Anglers should keep an eye out for the arrival of green and brown beetles from the end of November onwards.

We are lucky in Southland that we have such great trout fishing available to us. Make sure you make the most of it this season.