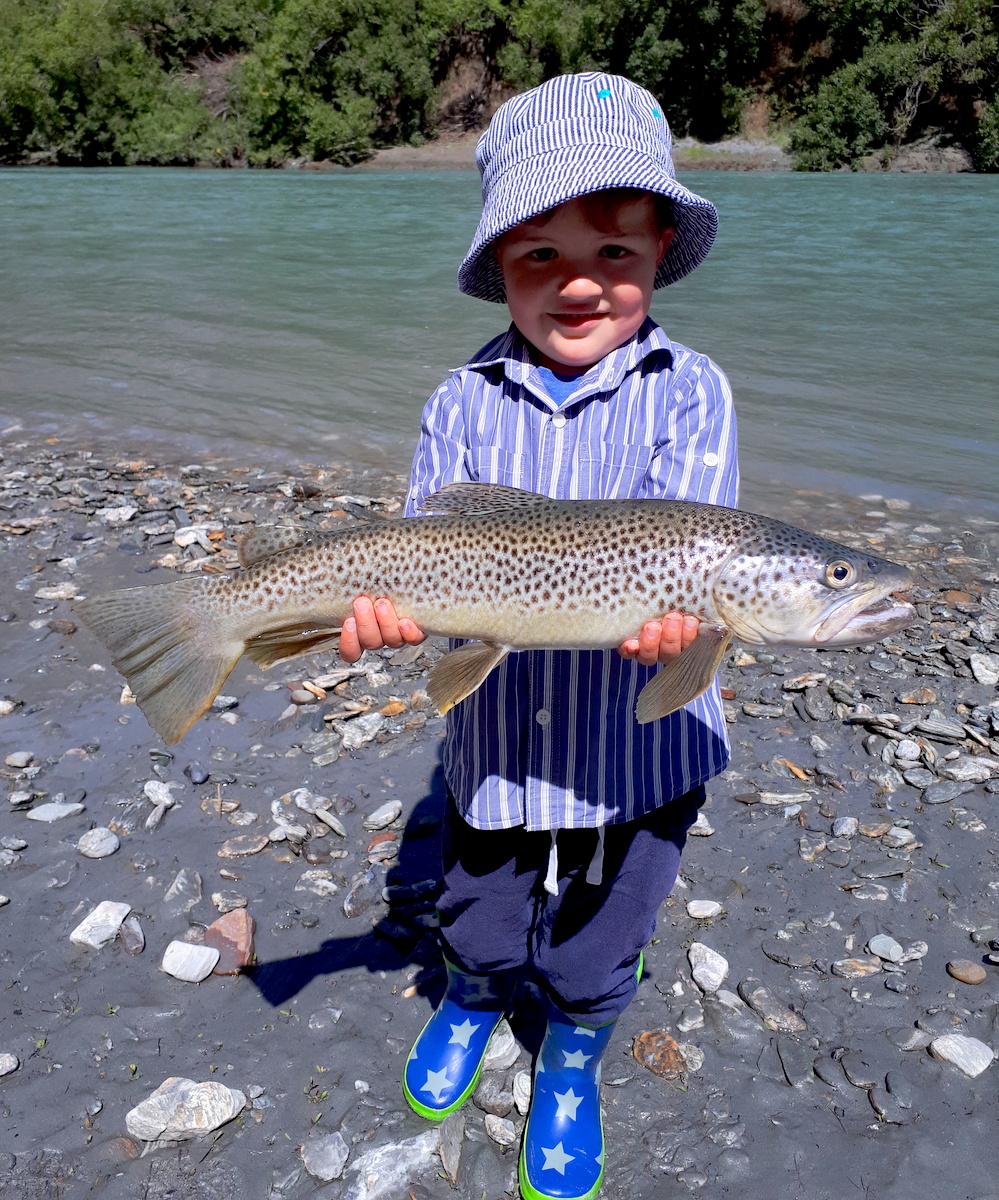 Poll: most think ‘too many cows’ for waterways

A Horizon opinion poll commissioned by Greenpeace reveals that 52 percent of Kiwis think there are too many cows for our waterways to cope with.The Horizon survey also showed that only 16% of people asked felt that cow numbers could continue to grow.The survey also found support for a moratorium on new dairy conversions. Read more here

Fish & Game has welcomed the government’s intention to develop a new national plan to halt the decline in water quality and improve rivers, lakes and streams. The Environment Minister David Parker says a new national plan is being developed to manage freshwater quality.  It will be compulsory for regional councils to follow the plan. Fish & Game’s Chief Executive Martin Taylor has applauded the move. Click here 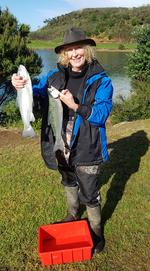 Christine Goodhue with some good condition trout and the winner of the lucky draw Kayak at the 2017 competition.

It’s that time of the year again when we hold our annual Kai Iwi Lakes trout fishing competition. Make sure you save the date of the 7th And 8th July 2018 into your calendar.

As part of our “Take a Kid fishing” programme, juniors and children are FREE to enter but they must register and they must be accompanied by an adult.

We are looking forward to seeing you and your family all participating in this great event. We appreciate the support of our sponsors for making this fun family event happen.

Check out our website for tips on how to catch your competition winning trout. 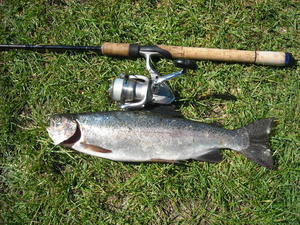 Regular autumn freshes are keeping the winter fishing reaches of ringplain streams in great condition and the current warm conditions and lack of snow on Mt. Taranaki means trout are still in feeding mode.

Lake Mangamahoe is continuing to produce some nice rainbows.

The lower Kaupokonui Stream is also well worth a visit, as is the Manganui River downstream of Bristol Road Bridge.

Unfortunately, the Stony River has again been affected by an erosion event on the mountain and the pools are currently full with sand.

The lower Waiaua River below SH45 at Opunake is in a similar state.

Up in the Ruapehu district, the main-stem of the Manganuioteao River downstream of the Makatote River confluence remains open until the end of June and fly fishing with a weighted 2-nymph rig, or spin fishing should produce fish.

From 1 July, only the section downstream of Ruatiti Road Bridge remains open and spin fishing in the pools adjacent to Rautiti domain will be a good option.

The Mangawhero River downstream of Raetihi-Ohakune Road Bridge is another Waimarino fishery that will be worth a visit in the winter season during periods of stable flow.

Spawning rivers and streams close from the end of April until end of September to protect the spawning fish and habitat.

But some rivers remain open all year round and can often be very rewarding.

Popular rivers still open for fishing include the Hutt and Ruamahanga rivers, and large parts of the Rangitikei River.

These rivers take a bit to become dirty so they’re always a good option throughout the winter season.

Staff have just released 153 rainbow trout into Lake Argyle, with a few going in to the lower canal below the dam.

This was entirely funded by Trustpower as mitigation for the recent desilting and dewatering of the canal, which saw around 300 trout rescued and relocated to nearby waters.

We encourage anglers to have a go at Lake Argyle while the weather is settled and the fish in top condition.

Bear in mind, though, that fishing the headrace canal above the powerlines is off limits until the new season begins on October 1. 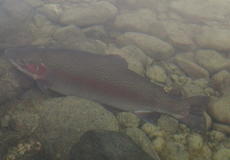 This is to allow trout the chance to spawn without disruption.

Also, keep on the lookout for another release which is scheduled to coincide with the July school holidays.

If you’re impressed by the double digit fish that have just gone into Argyle, wait until you see what another two months of growing will do for the next lot of fish!

Insert: 2 pics to choose from, one of a big double sitting in clear water; and if you want a human element, the other is NMIT student David Stephens with a double

The main fishing season has drawn to a close but there are still some areas that are open during the winter months.

Some recent restrictions were introduced to winter fishing due to concerns over the resource, so here's a reminder of areas that are open to fishing:

There are two high country lakes which are open all year - Loch Katrine and Lake Sumner.

In the low country, there are The Groynes fishing lakes and  Lake Courtenay for junior anglers only.

Other lakes that are open all year round to all anglers are:

Lakes Coleridge, and Lyndon are open from the June 1 to August 31.

Lakes Pearson, Selfe and Taylor are open from the June 1 to September 30.

For the rivers,  the Rakaia, Waimakariri and Ashley have an open winter season (May 1 to September 30) upstream of State Highway One to the western zone boundary for trout only, and this is catch and release.  Fishing for salmon is not permitted.

For the Hurunui and Waiau Rivers, there is an open winter season (May 1 to September 30) from the mouth to the western zone boundary for trout only, and this is also catch and release.  Once again fishing for salmon is not permitted.

Many of the lower river reaches remain open for anglers during the winter months, along with the majority of the larger lakes.

The lake fisheries are probably the best option for winter angling.

During periods of settled winter weather, the lakes are a great place to be.

Even during the winter months trout can be seen cruising the lake edges and are often found rising early in the morning.

The Hokitika and Whitcombe rivers remain open during the winter mouths providing anglers with back country opportunities. 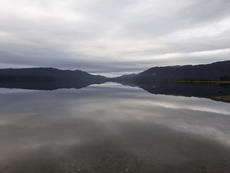 Many West Coast lakes are open for angling.

They are also one of the few catchments in the West Coast Region that hold a healthy population of rainbow trout.

The Grey River is another good option for winter fishing; it is open up as far as its confluence with the Clarke River, offering plenty of productive water downstream.

Not unlike Turangi and the Tongariro River, anglers are drawn from all corners of the world to Tekapo and Twizel to fish the Mackenzie country canals in winter.

This photo isn't photoshopped! Zane Levett and his canal rainbow.

The drawcard for the Tongariro is the spawning run of lake fish.

There isn’t so much of an epic run in the canals, but the fish do get aggressive and feed opportunistically on spilt eggs around spawning time.

For this reason, fishing the canals in winter can be dynamite.

Don’t get fooled into thinking it will be all sunshine and lollypops though, the Mackenzie basin can get as cold as negative 22°C.

Your line will freeze, your rod guides will freeze, and your finger dexterity will be rendered null and void.

The next day could be balmy though…

The canals are all open year-round for fishing along with several large lakes including: Benmore, Tekapo, Ohau, Tekapo, Aviemore and Waitaki.

June the first heralds the opening of several handy “winter season” options in the CSI Region.

Our year-round fisheries are all confined to the high-country, so the winter season provides some handy local lowland options again.

The winter season applies to these rivers downstream of their State Highway One bridges: Ashburton, Rangitata, Opihi and Waitaki.

There is also a winter season for lakes Hood and Alexandrina.

Please do closely read the winter season regulations as they're more restrictive in terms of methods and bag limits.

Please Click here to view the online version of the regulation guide and inform yourself of all the winter regulations relevant to your fishing activities.

Trout around the region will certainly be in spawning mode at the moment, with many fish now in their spawning tributaries which are closed to fishing.

However, there are always a few trout that decide not to spawn, or are too young to do so, and these fish are available to the angler in certain lakes and river sections.

A late season brown caught in the lower Oreti, a great year-round fishery.

At present, key places to target are the mouths of streams that flow into our lakes.

Both brown and rainbow trout often hang out near stream mouths at this time of year waiting for the right time to move into their chosen spawning tributary.

While waiting for the ‘right time’ to migrate upstream to spawn, these fish can be very aggressive, and a brightly coloured lure or streamer can be just the trick to provoke a strike.

Some notable Southland rivers, streams and lakes that are open for trout fishing all year include the:

Make sure to check your regulation book before any winter fishing trip.

Chances are, if you decide to keep a trout at the end of the season, if it’s a hen fish, it will have eggs in its abdominal cavity.

Have you ever tried eating these eggs?

If not, you should because internationally trout caviar is considered a delicacy. 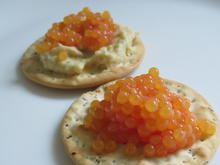 Trout caviar is also super healthy because it is loaded with Omega-3 fatty acids.

To prepare trout caviar, all you need to do is remove the membrane that surrounds the eggs and put about a teaspoon onto a cracker either plain, or with cream cheese – yum!