Fish & Game staff conducted drift dives on the upper Mataura, upper Oreti and lower Mararoa rivers during the month of March with some mixed results.

The count on the upper Mataura (near Garston) was lower than in previous years and although this result disappointing, a lower count was expected given the floods that occurred during February 2020.

Floods are a natural phenomenon and fortunately, brown trout are a resilient species so hopefully, the count will be back to normal next year.

On the other hand, we had a great count on the upper Oreti.

It was great to see that the Oreti trout have done well despite the flooding that occurred last year.

If you can squeeze in a trip to the upper Oreti before the end of April, it will be well worth it.

Above Right: A upper Oreti brown trout that was caught on a black and gold soft bait.

Finally, our Mararoa dive revealed plenty of solid rainbows between 1-2.5kg as well as the occasional larger fish.

A great way to target these rainbows is to drift a soft bait through the pools and runs.

May is the month for rainbows 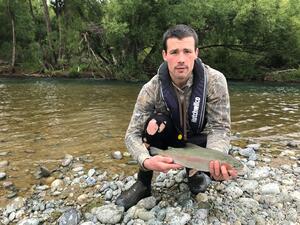 Southland’s lake tributaries are open during the month of May and now is a great time to target rainbow trout.

In the lead up to spawning, Southland rainbows will be in peak condition and will be extra aggressive.

Great spots to try will be the Upukerora, Grebe, Eglinton, Clinton, Worsley and the Waiau.

Brighter coloured lures tend to work well on pre-spawn fish (I like to use Fluro yellow) and if you can coincide your trip with the river receding after a fresh, you will have a great chance of success.