Perfect time to take a trout for tea

In their day to day ranging, Fish & Game staff have many fishing conversations with anglers from all around the region.

Right: Trout caught now should be in prime condition as they have had the whole summer to feed up.

In the course of conversation, many anglers note that they only practice catch and release.

The practice has its place in certain fisheries, but an important part of our sport also involves harvesting fish. 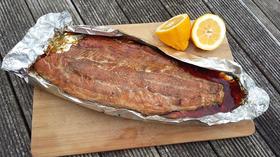 After all, trout were originally introduced for both sport and harvest and humans are hunter gatherers by nature.

Left: A simple Google search will help you find an interesting and tasty recipe.

A vast majority of the rivers in Southland have healthy populations of trout and can sustain a suitable level of harvest.

If you have not taken a trout this year, consider taking a trout before the end of the season.

Experiment a little with how you cook your trout. 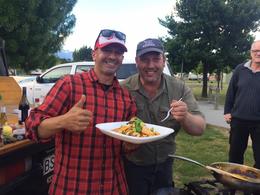 Smoked and pan-fried trout are failsafe cooking methods, but if you want to be more adventurous, a simple Google search should ensure you find an interesting and tasty recipe.

As things have been cooling down, Mataura mayfly hatches have been heating up.

In the middle to upper reaches of the Mataura, mayfly hatches have been pretty consistent from about 1-2pm onwards.

A size 18 Adam’s parachute is the choice of fly at the moment.

Lower down the Mataura, there have been steady hatches too, from about 2pm onwards.

Over the coming weeks, keep in mind that the lower Mataura River below the bridge at Gore is open until the 31st of May (excluding Opening Weekend of the game bird season 6 & 7 May).

If the weather cooperates and river levels stay suitable, there will be great fishing to be had on the lower Mataura throughout the month of May.

The upper Waiau has also been experiencing good hatches, both mayfly and caddisfly hatches.

During the writing of this article, the upper Waiau is at the very manageable fishing level of 90 cumecs.

Anglers are advised to make the most of the favourable fishing conditions. 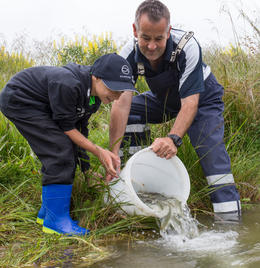 Fish & Game were kindly gifted 1,500 salmon from Sanford and 1,000 were immediately released into McGregor Pond.

Fish & Game staff have reared the remaining salmon to a slightly larger size and will be liberating them into McGregor pond over the coming weeks.

If your kids are at a loose end one weekend, take them down to McGregor Pond to try their luck.

These small salmon are quite ferocious feeders and should take most suitably-sized lures.

McGregor Pond will be a child and junior fishery only next season and not open until the Take A Kid Fishing event held on Labour Weekend.