The season so far

Scouting 20 hours a week has been the key to success so far this duck season, Otago hunter Chris Bell says.

Chris opened with his limit by mid-morning on a river maimai and dashed home to play rugby that afternoon.

“Hunting so far has been great,” he said.

Most hunters in Otago reported light harvests in clear and still weather on opening day.

The drought had emptied many shallow ponds.

Above Right: Three generations of the Harrex family (from left) Danny, Charlie, Harper (11) and Phill, all from Dunedin and Mosgiel, were duck-hunting at a pond near Berwick, on the lower Taieri, on the opening weekend. Photo: Ian Hadland, Otago Fish & Game

Paradise ducks were prevalent among many bags as the mallards were flying high.

But other hunters, such as Chris, on large rivers, lakes and permanent ponds did very well.

The first couple of weeks of the season were relatively calm. 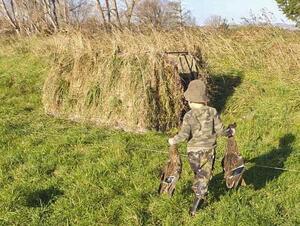 But on a windy morning, Bell set up a blind in a paddock next to the water where he had scouted good mallard numbers.

He put most decoys on the water and some in the paddock.

“We thought the ducks would want to be sheltered from the wind, but they all wanted in the paddock, which ended up being a great shoot,” he said.

Chris’s son Spencer (three) was dropped off at the blind towards the end of the hunt and helped gather up the last few birds.

Hats off to committed southern hunters like Tim Cossens, of Dunedin.

Tim’s newly tagged spot midway along a lake came up with zero on opening day while the south end of the lake was “going nuts”.

Some days later, Tim bagged a few parries and a swan before a bout of flu laid him low.

But you can’t keep a good man down. When last contacted, he was back out hunting at an estuary lagoon in a strong southerly. 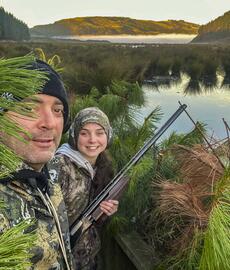 The crown jewel is the 67-hectare Takitakitoa Wetland, in the lower Taieri, which has five mai mais.

Among the hunters at Takitakitoa on opening weekend were father and daughter Stefan and Sophie Thorburn (16).

Other the Fish & Game reserves are located at Inch Clutha, Toko Mouth, Otokia and Waitepeka.

Hunters wishing to access these reserves for the rest of the season should contact Steve Dixon at Otago Fish and Game: sdixon@otagofishandgame.org.nz. 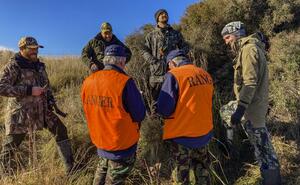 One offence notice was issued for possession of lead ammunition out of 60 duck hunters checked across the region.

More than 4000 game bird licences were sold in Otago before the season opening.

Thirteen rangers in five teams fanned out across Otago on opening day.

More than half of the 81 locations checked were found to be unoccupied.

Shortages of sub-gauge ammunition were reported before opening day.

Three hunters checked by Rangers were using sub-gauges - two 20-gauge and one .410.

Hunters have 10 weeks to harvest grey/mallard and shoveler ducks, from May 1 to July 11 (inclusive), this winter.

Hunting for paradise shelducks and black swans is open to August 29.

Hunters are urged to be considerate and aware of other river and river-margin users, such as farmers, walkers and anglers.

Two women walking on a track alongside the Clutha River suffered minor pellet wounds caused allegedly by hunters shooting from a boat in the river on the opening weekend.

Police released photos of two men to identify them.

A 26-year-old Central Otago man was arrested and charged with careless use of a firearm.

He appeared before a registrar and was then remanded to appear in the Alexandra District Court in June.

Shooting is not permitted from a boat under power at any time.

Hunting from a moored or tethered boat or a drifting boat (excluding the Clutha River between May 1 and 9, 2021) is permitted.

Duck-shooting has been a tradition on our wetlands and rivers for more than 100 years.

But with increasing shared usage of recreational areas, we have work to do to ensure our sport is maintained and preserved.

Illegally dumped duck carcasses have been reported in two separate incidents this season.

About 15-20 breasted ducks were dumped at a roadside layby.

Then about 30 duck carcasses were dumped in a resident’s driveway.

Police are investigating the latter incident.

The irresponsible actions of a few people reflect poorly on hunters.

Please do the right thing: respect the environment and other people. 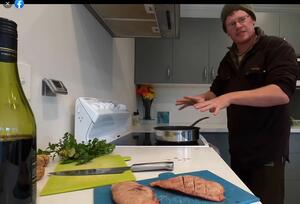 Otago Fish & Game Officer Ben Sowry preparing duck sliders, click on the picture to learn how to make your own.

Otago Fish & Game Officer Ben Sowry has been cooking up a storm in the kitchen this duck season.

He has filmed a video on how to cook mallard sliders.

Click on the photo on the left to watch Ben show you his mallard sliders and how to cook them.

The Otago hunting season for upland game birds is open from May 29-August 29, 2021, for quail, cock pheasants and chukar. 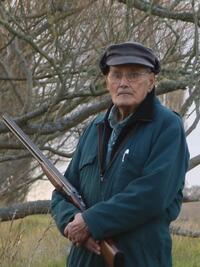 New gun, old hand … David Thomas (97), from Mosgiel, is duck shooting in South Canterbury with his son and his grandson this year. Photo: Supplied

David Thomas, of Mosgiel, knows a thing or two about duck shooting. He has been going for 70 years. He’s 97.

David enjoys getting out in the fresh air with his family.

He went duck shooting with his son Graeme and his grandson, also named David, on the third weekend of this season near Waimate.

This year he has not bagged any ducks, but as Both Barrels was being written he was planning to go out again.

He first went shooting ducks from his home in Morven before his embarkment during World War 2.

Born in Waimate in 1924, David served in J Force in post-war Japan. He lives in the Mosgiel home he and his late wife Lorna built and moved into in 1959.

Posted in Both Barrels, Hunting; Tagged Hunting Posted 8 months ago by Richie Cosgrove