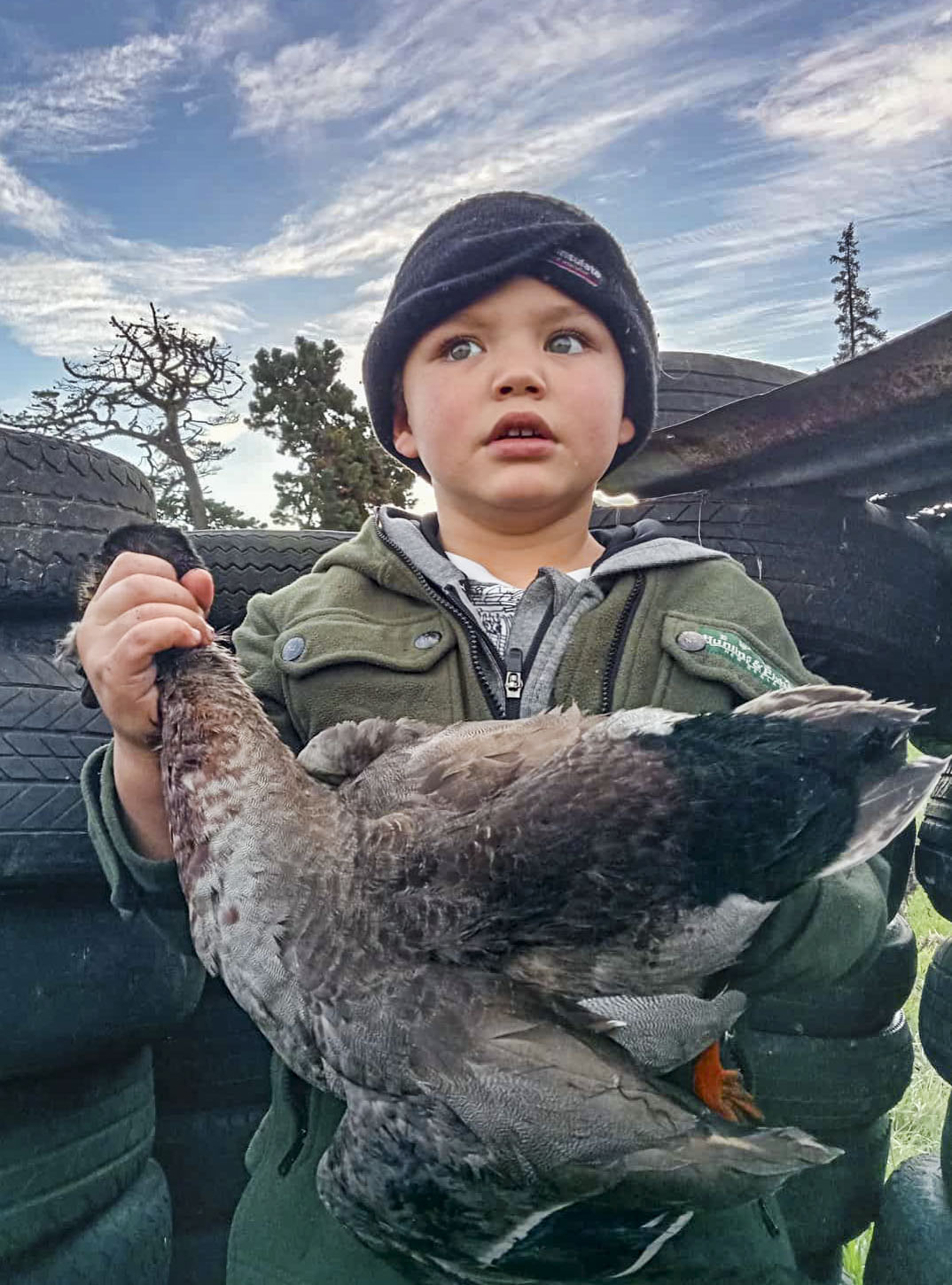 Otago Fish & Game first met the Dunedin father and son at a duck-calling event in Mornington before last season.

A year later, Hamiora is “bugging” dad to take him out duck-hunting more often.

Eli says the experience with his son is great.

“He is really hooked on it now.

“Every night he asks to go [duck-hunting] after school and watches YouTube videos on duck-shooting and calling.

Above right: Hamiora Smith (six) holds a mallard harvested with his dad on opening weekend.

“He even convinced me to get a mallard drake whistle. It drives his mother crazy blowing it.”

On opening day, Hamiora was imitating ducks flying around a Taieri dairy farm. He and his dad were in a maimai made with old tyres and roofing iron next to an effluent pond.

“He is quite good at calling now,” Eli says. “I honestly think the only reason I shot my first limit on opening was because of him calling all day.”

By late morning, Eli had shot about 17 birds and was ready to call it quits, but Hamiora convinced him to stay longer.

“I’m glad we did because we ended up with our bag.

“I’ve never eaten ducks so fat. They were unreal. Someone had been feeding them grain.”

Eli is a keen pig and deer hunter and says in the past he wasn’t big on duck-hunting, and it was more about socialising with mates at the end of the day.

But this year he is out duck-hunting more often.

“It’s different when your kids are into it.

“Hamiora was asking this year if it was on. I forgot all about it, actually. He was bugging me for it.

“But that’s what we have been doing. I’ve been for a few shoots with him.”

After opening, they hunted on Department of Conservation land, which requires a DOC game bird permit in addition to a Fish & Game game bird licence.

“There were a few ducks getting around there. It was pretty cold and wet. We settled in for the day.

“We parked up with a camo net with half a dozen of decoys and a wind-driven spinning one.”

They’ve also hunted some ponds and the Taieri River, where Eli took a dip to retrieve some ducks after their young dog refused.

Hamiora convinced his dad to buy him a mallard drake whistle after watching YouTube videos.

“He went into the shop, straight to the counter and asked the guy.

“We’ve had 10 days of that to be honest. But he’s getting it pretty good.” 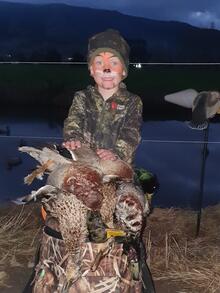 Spencer Bell (6) takes duck-hunting camouflage to the next level.

Face painted like a tiger, Spencer Bell (4) had just returned from a birthday party when he decided he wanted dad to take him duck-hunting.

His father, Chris, was nursing a sore head after celebrating a long-awaited club rugby victory by his beloved Zingari-Richmond.

“I had to quickly come up with somewhere,” Chris says.

The father and son’s hunt a couple of weeks into the duck season was a success.

“He called at all the birds we harvested, and had a great time eating lollies during the downtime,” Chris says.

“I thought maybe his face paint was a bit over the top, but oh well.”

Since then, they have been duck-hunting a few more times, and often the youngster tags along on scouting trips.

“He’s got his own binoculars. He knows what he’s looking for,” Chris says.

“He loves trying to find them. He’s quite a good help.”

“It’s quite pleasing to know that you’re rubbing off on him the right way.

“He’s using the right lingo and all that carry-on, so it’s quite good. It’s quite exciting.

“He loves blowing his duck calls and all that carry-on.

“He’s hanging for the day he gets to shoot one.

“I think he likes his snacks more than everything, as well.”

Snacks are a big part of keeping children interested when no birds are flying.

Spencer is getting better at calling, his dad says.

“Obviously, the parries are easy. You just keep blowing and they don’t seem to mind.

“The mallard call is good. We are starting to get him to quack a bit better now rather than just blow it ─ short, sharp ones. He’s getting some rhythm to it.

“I think Spencer likes his hand movements at the end of the call rather than the actual calling. His hands are going everywhere and it’s quite funny to watch.”

It won’t be long before Spencer is getting up on opening morning and beside his dad.

“I won’t get out of the house without him.”

His advice when taking children duck-hunting is don’t stress about bird numbers.

“If you’re taking them, it’s all about them. It’s not about you. Make it for them.”

Chris runs the Otago Waterfowler Facebook page and is regularly notching up successful harvests, often from a portable blind. He and a mate spend a combined 10 to 15 hours a week scouting for birds before hunting, he says.

What’s up with the upland opening? 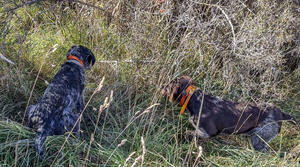 However, for the past three years, the Otago upland season has opened on May 29.

This year the date caught out some long-time hunters who had planned for Queen’s Birthday weekend, and then found their usual spots had been hunted by others a few days earlier.

On the other hand, some farmers chose to allow access onto private land only from Queen’s Birthday weekend.

This was an administration error which slipped past many.

Upland game bird hunters can expect a return to opening on Queen's Birthday weekend next year. 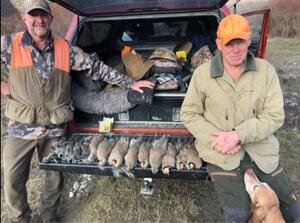 A day in the hills yields a bag of quail and chukar for Russell Laing and Dave Gibson.

Central Otago’s Tony Lepper and his hunting mates Russell Laing and Dave Gibson were among those caught out by early opening date.

“We have had a rough start with the season,” Tony says.

Tony, who runs Earnscleugh Irrigation Company and is a former Central Otago mayor, has hunted upland game birds with Russell and Dave in the region since 1984 and 1985 respectively.

“Not knowing it was opening on the Sunday, others went out in the week before us,” he says.

Things improved once they eventually hit the hills.

“We had a good opening. We got 30 birds between four people.”

On their next hunt at another private property, they shot about 20 birds.

Their third hunt was abandoned due to snow and rain. Quail are difficult to hunt in wet weather. They are less active, and rain erases their scent, making it hard for dogs to locate them.

Quail numbers have been lower for the past two years, Tony says.

Over the past four decades, he has seen good seasons and bad.

Nowadays, Tony says he and his friends focus more on the number of days they shoot rather than birds shot, although he admits they are still competitive the moment flushed quail burst out.

Upland game shooting requires speed and precision, and sometimes hunters more used to ducks get left behind, he says.

The trio hunt upland game about 21 days a season.

“We hunt until the middle of July. The minute it gets warm and the birds start splitting up, we leave them alone.”

Tony believes there are fewer upland game bird hunters than when he started and has noticed a changing trend.

“When we started shooting 40 years ago there would be cars or trucks parked near the gullies where they shot.

“We don’t see the numbers of hunters like that. There’s also not the hordes of Southlanders.

“But farmers’ sons are starting to put groups together for hunting trips.”

The three friends hunt with a Hungarian Vizsla and Labrador retrievers.

Tony is running his third Vizsla, only 14 months old, and he is already impressed.

“Vizlas roam and point. She is going to be by far the best of my three dogs.

“If her nose comes up and she locks on, we have got to backtrack.”

The Labradors complement the team as they push into thick scrub to flush and retrieve.

He also chases chukar, and says high-country farmers are starting to see more of them.

On a memorable day last year, they saw 90 chukar.

“We look for quail in the morning and then go up the hills [for chukar].”

When he spoke to Fish & Game, he was about to head to Otematata and McKenzie Country for quail and chukar.

Tony originates from Hawkes Bay where he used to shoot pheasants over, of all breeds, a beagle hound.

Today he gives a big rap to the farmers who allow them to hunt on their private land and often thanks his hosts with delicious roasted quail wrapped in bacon.

“You have got to establish the relationship.” 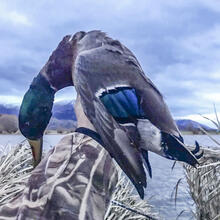 Lone mallard drakes are suckers for a well-timed greeting call.

As the season gets on, the ducks start thinking about the early stages of their mating ritual.

Some very early birds will have paired up and gone off to the honeymoon suite: such as small creeks, tiny ponds, and little backwaters.

These early breeding birds are not interested in decoy spreads, as they’re just focused on each other.

They are, however, highly vulnerable to jump shooting.

Otago Fish & Game recommends that jump shooters try to avoid these small waterways where ducks are paired up, to allow them a bit of peace to continue their romance unmolested.

Jump shooters are best to focus on larger rivers and bigger ponds at this time, to target those birds that haven’t properly paired up yet.

Although it’s not the best time for jump shooting, the end of the season is a decoy hunters dream!

Mallard populations are ‘drake heavy’: that is, there are more drakes in the population than hens.

Once birds start pairing up, there are always going to be excess drakes that missed out on the annual ballot for hens.

These birds are drifting around, often alone, and looking for action.

They either want to find an unpaired hen, or they will be looking for an already established pair to try and steal the hen.

These lone drakes are suckers for a decoy spread, often committing to land without circling.

Late season, it’s better to have smaller decoy spreads, made up of several well separated ‘pairs’ of decoys (one hen and one drake).

Keep some distance between each pair, to give the decoy spread a look like it’s a group of birds that have paired up.

Any drake passing by will be sure to come and try and steal a hen for himself, especially if coupled with a well-timed greeting call. 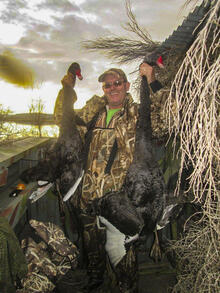 In the Clutha catchment downstream of the Clyde dam, and all the waterways flowing into the sea in Otago, an often-overlooked resource is the black swan.

With a bag limit of 10, and a season extending until August 28, these birds are a great answer to those waterfowlers looking to diversify both their experiences and diet.

Contrary to some opinions, swan meat is excellent table fare. Lean and rich, it lends itself well to schnitzel or stir-fries.

Most hunters typically use their meat for sausages or salamis, of which they are perfectly suited to.

One of the best ways of hunting swans is a process known as ‘pass shooting’.

Swan will typically use the same path to fly in and out of a wetland area to feed at dawn and dusk- these are called flight lines.

By positioning themselves under a flight line, hunters can experience some exciting hunting at first or last light.

Next time you’re out hunting other waterfowl, keep an eye on where the swan are transiting, and what time. Be there the next day, at the right time, camo up and stay still!

Reminder to Central Otago hunters, there is a zero bag limit of swan in the Clutha River catchment upstream of Clyde dam, so a drive is needed to harvest these tasty birds.

Posted in Hunting, Both Barrels; Tagged Hunting Posted 6 months ago by Default Admin