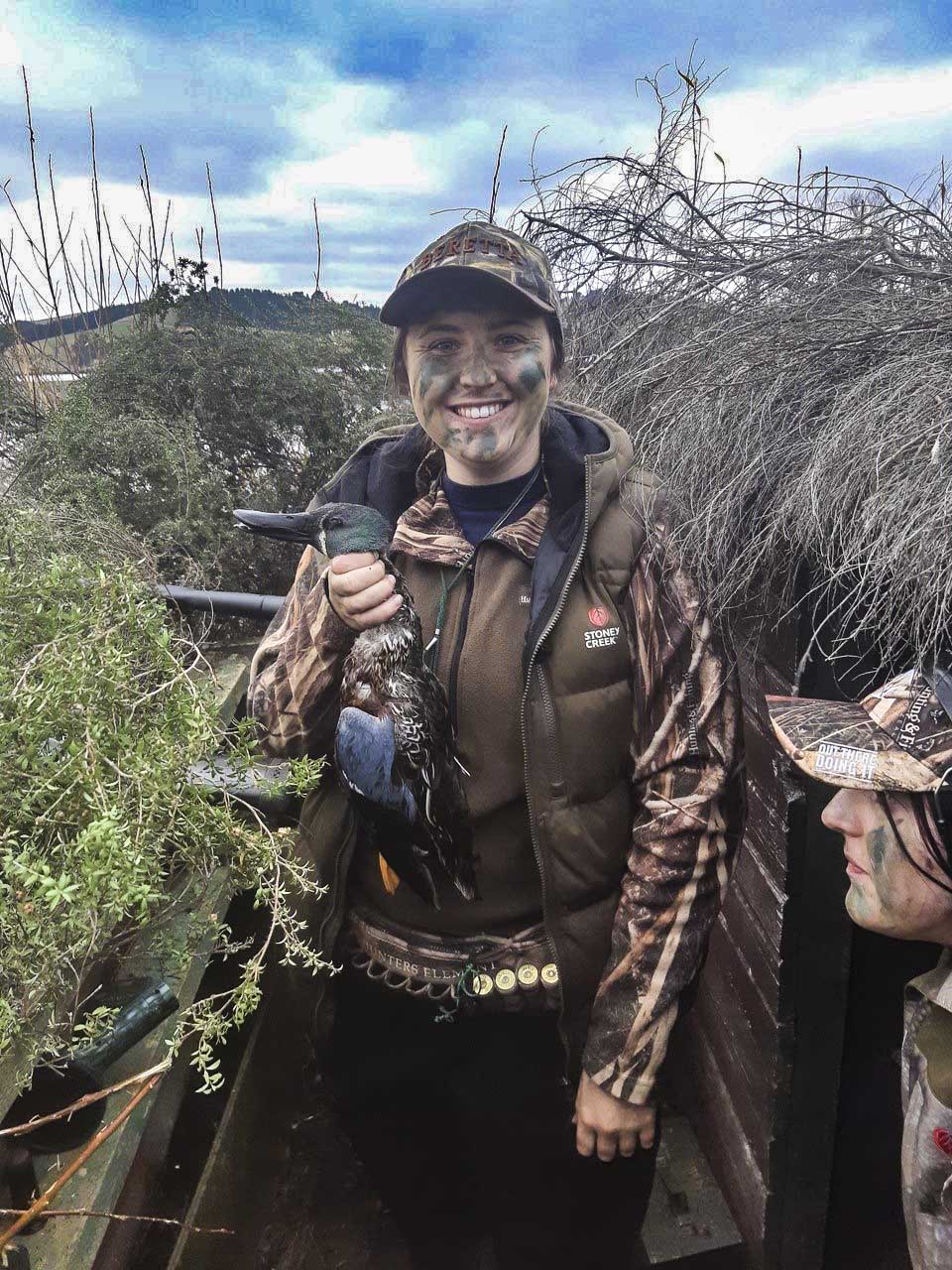 Shooters keeping it a family occasion

Duck and quail shooting is a family affair for the Bonneys of Allanton.

Each year they shoot ducks at Kaitangata Lake and then quail in Central Otago.

Paul Bonney has been duck-shooting for about 40 years since his father Earnie first took him to Kaitangata Lake when he was 13.

“On Kai’ Lake when we first started there were two of my uncles and dad, and it just graduated into the kids after that,” Paul says.

Above Right: Gemma Bonney, a successful national clay shooter, shot this shoveler duck at one of the family’s several maimais. PHOTO: SUPPLIED 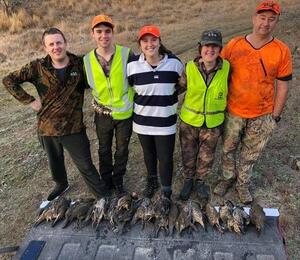 “We have five or six maimais on Kai’ Lake that we all shoot as a family unit.”

Paul’s wife Kerry does not shoot.

“Lake shooting is pretty hard work. You either like it or you don’t.”

Opening weekend was slow because of the normal weather on Kai’ Lake, Paul says.

“It’s just the way it always is - sunny day. We saw a few ducks around.”

The family then headed to Central Otago on Queen’s Birthday weekend.

“Saturday was tough because of the high wind,” Paul says.

“It was quite difficult in the morning to try and find them. 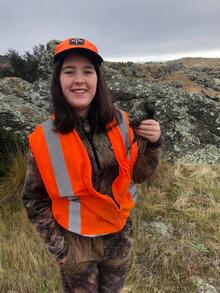 “But they were still there on Sunday. We did the same beat again and with the change in the weather, they were out and about.”

Among the successes of that weekend, youngest daughter Holly shot two quail.

Sam started school shooting in year 10 and is turning into a good shooter.

“He has just started skeet shooting, which really helps with the quail.”

Holly has only started this year - year 13 - and is at the beginning stage.

“With all of them learning to shoot correctly it really helps duck and quail shooting,” Paul says.

“We will probably go out again in a couple of weeks.”

Get out there again

Ben Garraway (10) looks down the barrel of his .410 at sunrise on Lake Waipori. PHOTO: SUPPLIED

Make the most of your 2021 game bird licence.

The Otago mallard season is more than half over and closes on July 11.

Now is a good time of year to take the kids on a short evening shoot for an adventure.

Take earmuffs and warm clothes for them, and plenty of snacks.

Keith Garraway, of Mosgiel, plans to take his son Ben (10) shooting again after two outings so far this season.

“We’ll get out again,” Keith says.

Father and son shot on a maimai on Lake Waipori on opening day. Ben uses a .410-gauge single-shot gun.

“Things were a bit slow, but we ended up getting five birds,” Keith says.

“We were happy with that. It was probably more of an exercise in getting Ben out and experiencing it all. 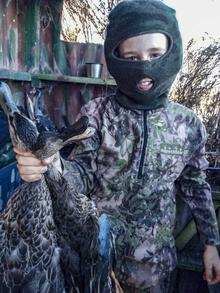 Ben shows off the harvest during a big day on the lake. PHOTO: SUPPLIED

“It’s not just about standing in a maimai all day shooting at ducks.

“It’s about getting prepared, getting all your stuff ready, learning safety and boating skills. We were in a canoe.

“It was quite a big exercise.”

Youngest son Zac (6) helped scrub the maimai and was not impressed he missed out on Opening Day, but his turn will come, Keith says.

Keith (65) learned as a child from his father on Lake Waipori in the late 1960s.

His father built one of the boatsheds that these days stands on a lean near the Waipori pumphouse.

“It’s got sleeping quarters upstairs and we used to stay in there.”

He also hunted with his two other grown-up sons.

As we head deeper into winter, the behaviour of gamebirds will start to change.

Being able to scout for birds can prove invaluable for success at times, Otago Fish & Game officer Ben Sowry says.

Driving around with a pair of binoculars can find mobs of birds, which can be hunted the following day by setting up at the location before daylight and shooting the birds as they arrive back from their night-time feeding areas.

Attention to decoy spreads is important as we plunge into the shorter days.

Closer to the end of the season, many birds break up into smaller groups as they start to develop breeding behaviour.

By making your decoy spread smaller, can more closely replicate these natural groups of mallards.

Setting small groups of five or six, and a few pairs around on the pond or lake edge will represent their late-season behaviour.

“The added benefit with smaller decoy spreads as well as shorter daylight hours is the ability to stay in bed just a few more minutes in the morning before going out hunting because it doesn’t take so long to set up the spread,” Ben says.

Brad, from Hunting and Fishing Central Otago, in Cromwell, says some duck-shooters in the area are finding good numbers more elusive as the season progresses into winter, he says.

“Keep trying the places where you know they have been,” Brad says. 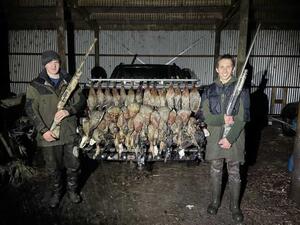 Hunter Cockerill (left) and Jack Light had an impressive day of shooting with their schoolmates on a wet weekend. PHOTO: SUPPLIED

Dan Kunac, the son of Hunting and Fishing Dunedin owner Scott Kunac, has been shooting every weekend this season.

“They have been having some pretty good shoots,” Scott says.

On a wet weekend this month, Dan and schoolmates Josh Sanders, Jack Light and Hunter Cockerill shot about 80 ducks out of layout blinds in a paddock on a Taieri dairy farm.

“The Taieri is holding a lot of ducks and it’s turning it on if you do the work,” Scott says.

They then went to Waitaki and harvested about 30 ducks.

Back at the Taieri the next weekend they had more success on a sunny day.

“People who are going after them on the paddocks are doing way better than if you just happen onto a pond,” Scott says. 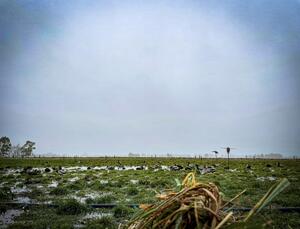 Decoys among the puddles as viewed from a layout blind on a Taieri paddock. PHOTO: SUPPLIED

“It was pretty quiet for a lot of people on opening day but there are still a hell of a lot of ducks out there to be shot through the season.”

Also getting good results on paddocks is Josh Hastie, of the Taieri.

Shooting from layout blinds last weekend, he and a mate harvested 32 ducks.

Depending on the location, shooters may find lead ammunition is permitted shooting on paddocks.

But if you have any doubt, it is best to non-toxic shot wherever you can for paddock hunting.

For clarity, lead shot is banned within 200 metres of open water, except when using a .410-gauge cartridge. Open water means an area covered by water wider than 3 metres.

Otago Fish & Game was asked recently if temporary puddles were considered open water. A puddle is only classed as open water if it is wider than 3 metres and is attached to permanent open water.

Check your regulations under Schedule 1, Condition 5 of the 2021 Game Bird Hunting Guide.

Most hunting shop retailers spoken to Fish & Game this week say there are no shortages of shotgun ammunition other than for sub-gauge.

Game bird shooters usually stock up enough ammunition to see them through before the start of the season.

Due to COVID-19, supply and shipping disruptions have created challenges for retailers.

Most retailers import ammunition from overseas once a year in large volumes or are alternatively serviced by New Zealand suppliers.

One retailer ordered ammunition 10 months before the season opening and received their main order on the Tuesday after opening weekend.

Otago Fish & Game officer Ben Sowry has been a relentless force for good in the kitchen this game bird season.

Ben is a keen duck-shooter and harvests on most weekends of the season.

Nothing goes to waste.

Using a fan-bake oven over several hours on very low heat, he prepared some duck jerky for an upcoming hunting trip. Too good to resist, it was all eaten before the trip.

Posted in Both Barrels, Hunting; Tagged Hunting Posted 11 months ago by Default Admin