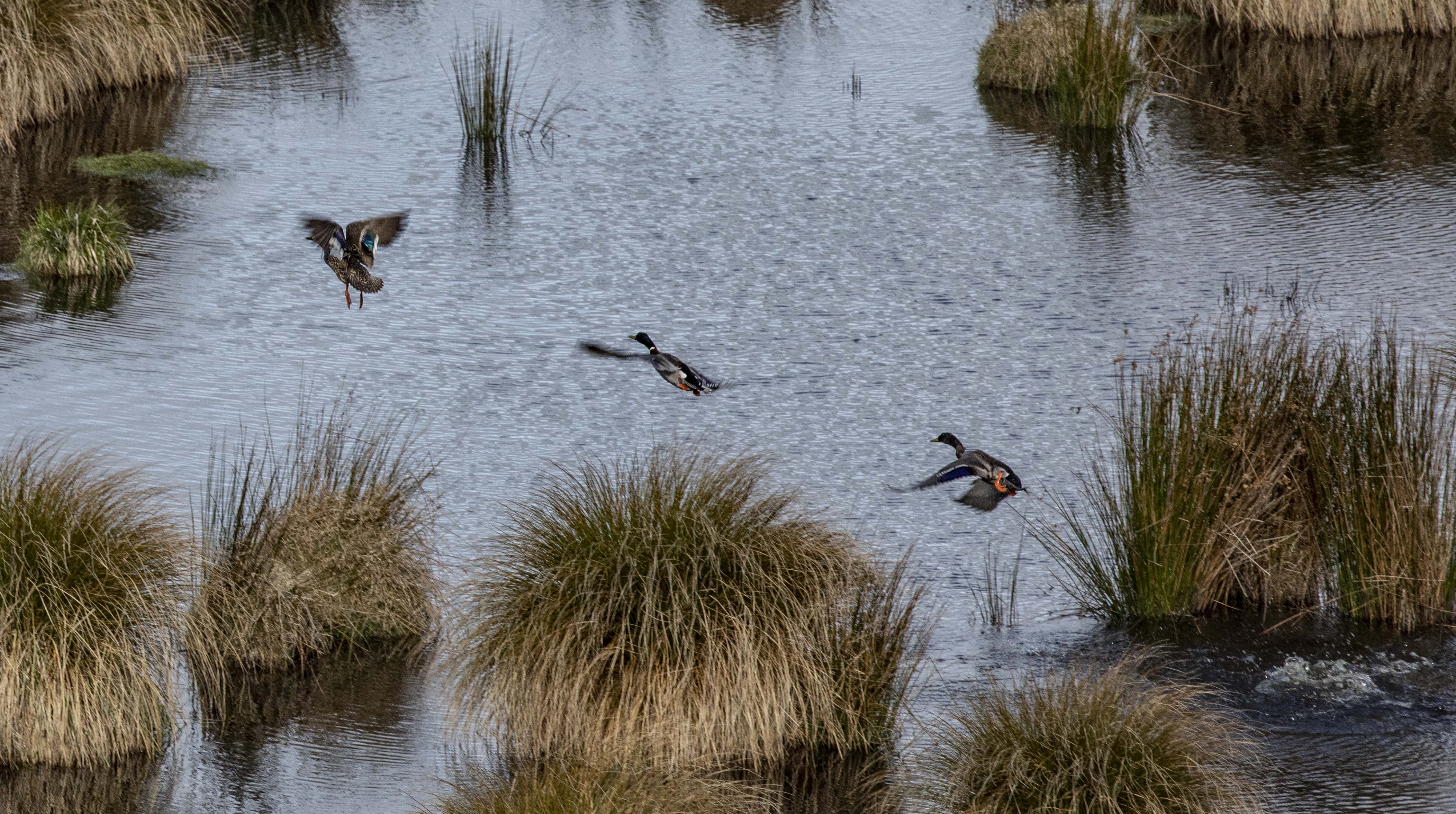 Excitement is building in Otago for the opening of the 2021 game bird season on Saturday, May 1.

Duck hunters can look forward to an above-average season in the region if the weather plays its part.

Due to dry conditions, rivers and other permanent bodies of water are likely to offer the best shooting unless there is substantial rain before opening weekend.

This year’s mallard monitoring results were 10% above the average count since 2015.

Above Right: Rivers and other permanent bodies of water are likely to offer the best shooting unless there is substantial rain before opening weekend. Photo: Richard Cosgrove, Fish & Game.

An aerial survey was conducted this month across parts of the Taieri, Clutha and Pomahaka. 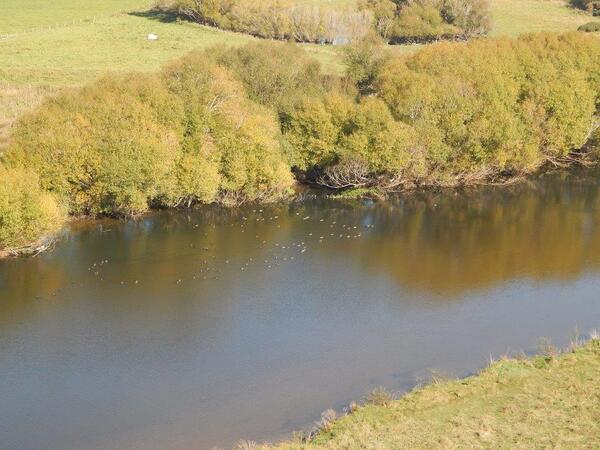 Mallard monitoring is a trend count. It is important to note that annual counts can be affected by many variables, such as water levels and weather.

Some areas in Otago are very dry this year and there are variances between areas across the region.

River transects had more ducks on them this year than usual.

Parts of the Clutha and Pomahaka rivers had some of the highest recorded concentrations of ducks since 2015.

One section had almost doubled its previous highest count. 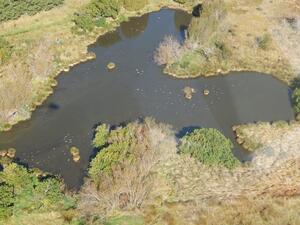 Permanent ponds had good mallard counts but there was a lack of ephemeral water such as shallow ponds and paddock puddles. Photo Paul Van Klink, Fish & Game

One lucky pond had four times the highest number recorded on it in the past six years.

On cross-country transects, mallard counts were well below the average.

There is a lack of ephemeral water in shallow ponds and paddocks.

Ducks have largely moved away from many of these areas.

One-third of all ponds surveyed had no ducks. Several ponds were dry.

However, keeping it in perspective, a few of those ponds have not recorded mallards since 2015.

Farmers have reported large flocks of ducks on harvested grain in South Otago and West Otago.

We have had several calls from farmers about nuisance populations of ducks.

Be prepared to be flexible and adapt.

If we get the right weather conditions, hunters should be in for a good harvest.

There was no mallard monitoring last year because of the Covid-19 lockdown.

Otago’s paradise duck population is looking stable, based on this season’s counts.

An aerial count of paradise ducks in February - during the moult - found numbers similar to 2019 and slightly higher than 2020.

The highest parrie counts were on Styx Basin, in the Maniototo, parts of the Ida Valley and Lake Tuakitoto, in South Otago.

Obviously, most post-moult parries won’t have stuck around in the same locations and will have moved on to feeding grounds.

Hunters are encouraged not leave it too late to buy ammunition and game bird hunting licences due to some supply shortages and retailer changes.

Most retailers were organised and ordered ammunition early.

Supplies of 12-gauge should not be a problem at most outlets.

But some retailers have scrambled to secure ammunition from different sources after their regular international suppliers failed to deliver.

But if you’re shooting with a sub-gauge, don’t wait until too late for non-toxic ammunition before opening day.

Check stocks with your local retailer.

This year’s season, which opens on May 1, marks an end to duck hunters using lead shot on or near open water.

The phase-out period for lead shot has taken several years.

Duck hunters, apart from those using small-bore .410 bore shotguns, must use non-toxic ammunition.

Lead shot may only be used if hunters are shooting more than 200m from open water.

Most hunters who use 10 or 12 gauge shotguns have been required to use non-toxic shot since 2004.

But most sub-gauge shotguns have been exempted until this year.

Supplies of 28-gauge and 16-gauge ammunition are highly limited.

Hunters should be prepared for the changes but delays with international suppliers had not helped.

This is another reason why hunters need to get organised early.

Year-to-date sales of game bird hunting licences in Otago are up marginally compared with this time last year.

Feeding your pond in the weeks leading up to opening day will increase your success rate. Photo: Ian Hadland, Fish & Game.

Otago Fish & Game Rangers will be out checking hunters on public and private land on Opening Weekend of this year’s game bird season.

Here’s a checklist for the season:

• Get your ammo. Non-toxic shot is now mandatory for all waterfowl hunting, except those using a .410 bore.

• Repair and re-rig the decoys.

• Pattern your shotgun. It is important to understand how your gun performs with different loads and ranges.

• Dust off the duck caller and practise. If you’re a beginner, head down to the local duck pond to tune your ear into duck calls. There are four basic mallard calls: ‘hail’, ‘greeting’, ‘come back’ and ‘feeding’.

• Sharpen your shooting skills on clay targets. You’ll get much better satisfaction knowing you have put in the time to practise. Hunters have an ethical responsibility to harvest game birds in a quick and humane manner.

• Know your bird species. When a bird is incoming at a rate of knots, you’re not going to have time to whip out the 2020-21 Fish & Game regulation guide and look up which bird species it is. Do your homework now. If you’re an experienced game bird hunter, teach a junior or a less-experienced friend how to identify the different species. 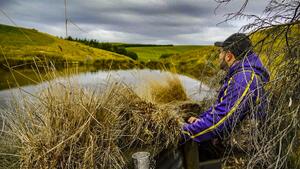 Checking out the maimai, scrubbed up and good to go two weeks before the season starts. Photo: Ian Hadland, Fish & Game

• Scrub up your maimai and feed your pond.

• Get your dog fit and ready. Put in some time reinforcing their training, especially if you’ve got a young dog. Mix up the daily walks with practice retrieves and obedience commands. Your hunting mates will thank you.

• Invite a mate or junior hunter along, and help to promote recreational hunting.

Posted in Both Barrels; Tagged Hunting Posted 13 months ago by Default Admin