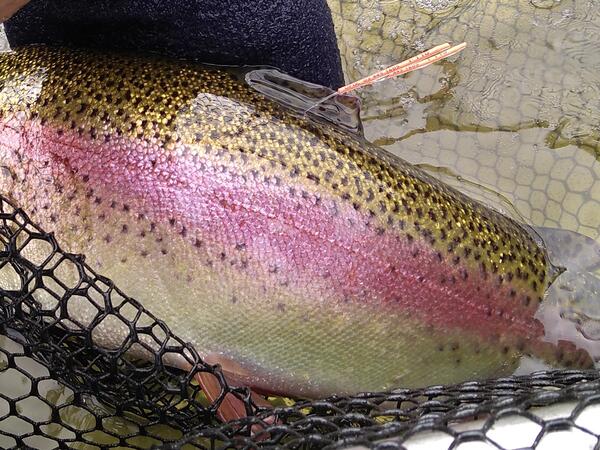 Three rainbows released into Butchers Dam are marked with an orange tag.

Junior anglers in Central Otago are encouraged to get out fishing for a chance to win a fishing rod and reel from Otago Fish & Game.

Three of these rainbows are marked with an orange tag in the dorsal fin. If a junior angler catches a tagged fish, send us a photo of the fish with the tag still attached to win one of three rod and reel sets. Email photos to pvanklink@fishandgame.org.nz or bsowry@fishandgame.org.nz, including the anglers’ name and phone number.

The competition is open to all licensed anglers aged 17 years and under. The prizes, donated by Mike Teasdale Motors, can be collected from the Otago Fish & Game office in Cromwell. 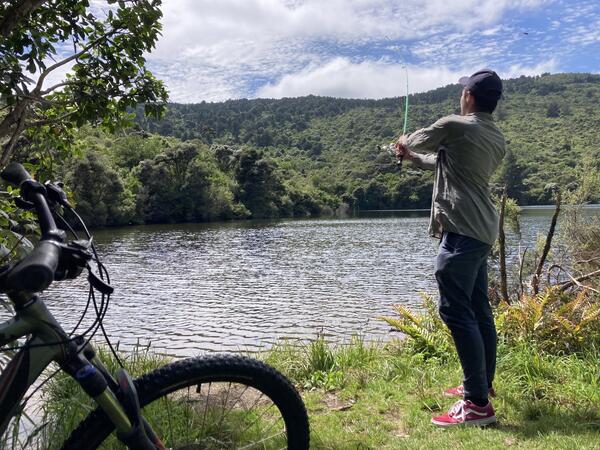 More rainbows have been liberated into Southern Reservoir and Sullivans Dam.

These two-year-old fish were reared at the Macraes trout hatchery and are in superb condition.

At this time of year, your best chance to catch them is in the evenings.Southern Reservoir is on Reservoir Road, at Mount Grand, and Sullivans Dam is at the top of Leith Valley Road, near the Northern Motorway.

There’s a bag limit of one fish per day.

Lake fishing in Central has been tough for most anglers, with many people wondering if there’s even fish in the lakes.

We assure you the fish are there.

But lake temperatures have been at their seasonal hottest, so the fish are seeking cold water.

To improve your chances, fish early in the day or troll deep. Downriggers and leadlines fished at 14m plus will be doing the damage. Also, target stream and river mouths where there’s cool water.

Anglers should avoid catch and release in water temperatures higher than 20degC as the released fish will have extremely high mortality rates.

Temperatures will be starting to fall with the onset of recent rainfall and longer and cooler evenings.

Most rivers are low in Otago.

Fish early morning, seek out colder waterways, or just go fishing for one or two for the table.

Cicadas have been active in the high country. Fly anglers have been having success using small imitations (#12 or #14). 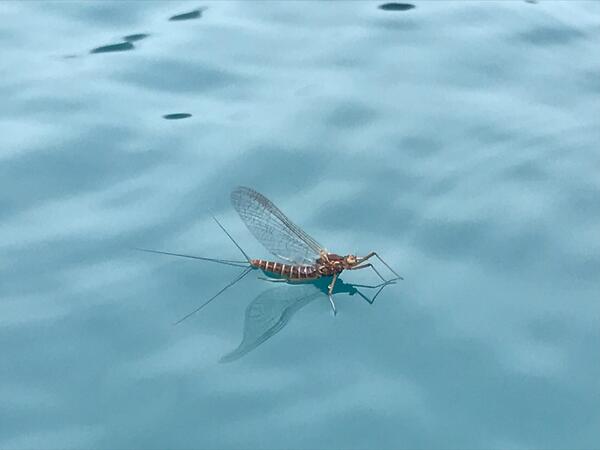 Mayfly hatches are happening most days.

Sedge and mayfly hatches are happening most days, with fish gorging themselves on these seasonal insects. 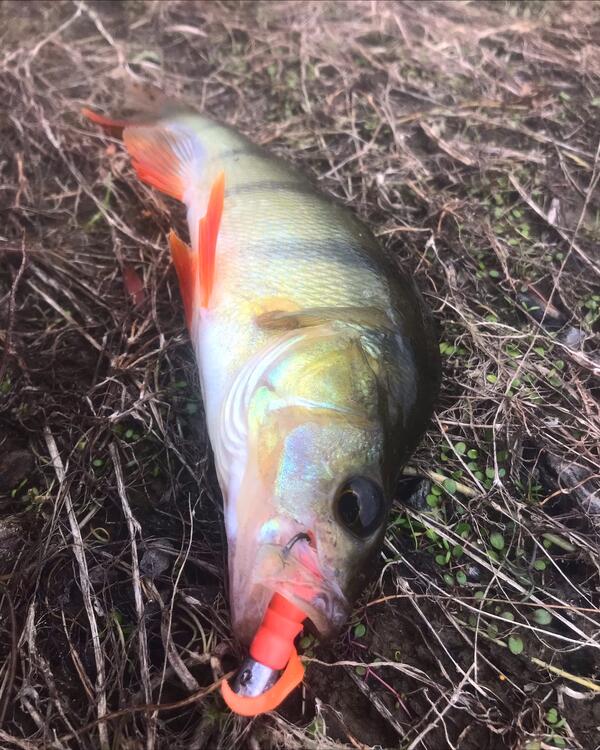 Perch have been highly active in recent weeks.

These fish love hot water. Perch are easy to catch and their firm white flesh is good eating.

They also take spinners, natural baits such as worms and maggots, and feathered lures or nymphs.

Many anglers say red lures work the best. Small blade spinners, such as Mepps and Jensen, Rapalas and Zeds, are popular.

In Central, perch can be caught in Butchers and Conroys dams near Alexandra, Dam, the Manuherekia River, and Fraser Dam near Clyde.

Target perch near underwater structures or snags. They tend to swim in small schools, so if they start biting, stay there.

Take care handling perch, which have several spines, including one on each gill cover. 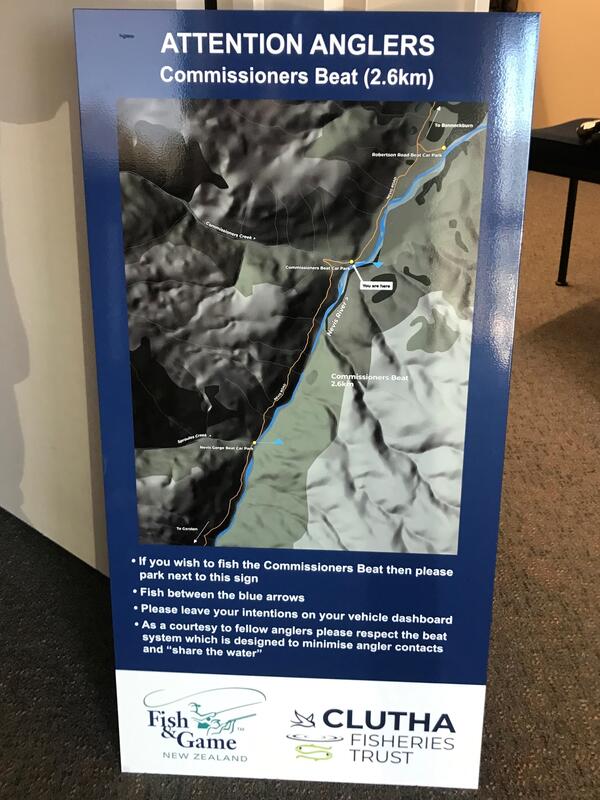 A replacement sign will be installed at the Commissioners beat in the Nevis after another recent theft.

An angler sign has been recently stolen from the Nevis River backcountry fishery, following the illegal destruction of six signs there in spring.

A voluntary beat system was introduced in the Nevis River at the start of the 2020-21 fishing season after concerns about angling pressure there.

Anyone with information about this incident is asked to contact Otago Fish & Game or police.

A replacement sign will be installed at Commissioners soon. 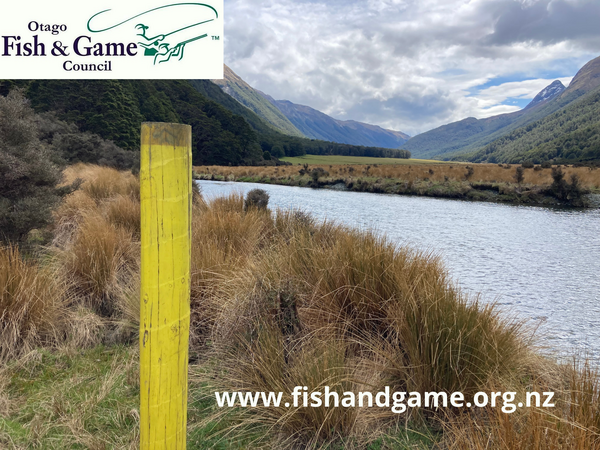 The Upper Greenstone is separated into three beats, which are marked on the access track with Fish & Game signage, during the Controlled Fishery Period.

Backcountry anglers wishing to fish the amazing Upper Greenstone in March need to book ahead.

The Controlled Fishery Period applies on the Greenstone from its source at Lake McKellar to the Sly Burn confluence, from February 1 to March 31.

This ensures anglers will have exclusive angling access to a river beat for the period of their booking.

During the Controlled Fishery the Upper Greenstone is separated into three beats, which are marked on the access track with Fish & Game signage.

The water is fly only and has a daily bag limit of one fish.

The lower Greenstone (upstream of the first swing bridge) and below the Slyburn confluence, as well as the Caples River, remains open to all Whole Season Licence holders with an Otago Backcountry Endorsement throughout the season (November 1 – May 31).

The use of spin fishing gear with fly is not permitted in fly only waters.

More information, maps and to apply for bookings:

We are mid-way through a triennial review of the Otago angling regulations.

Council have indicated several changes they intend to make to simplify regulations while maintaining the sustainability of fisheries.

Follow the Otago Fish and Game Council Facebook or keep an eye on the ODT for upcoming details on how you can contribute to the process.

Posted in Reel Life; Posted 4 months ago by Default Admin