The Mackenzie Country has a new autumn tourist attraction, with a spectacular run of sockeye salmon heading up the region’s rivers to spawn.

Native to North America, the onset of autumn sees large schools of the brightly coloured fish moving up rivers as they look for a place to lay their eggs.

The Mackenzie sockeye population is the only one in the Southern Hemisphere and Fish &  Game is in the second year of a three year study to try and better understand the species.

Above Right: A sockeye salmon scurries through the Twizel River on it's way to spawning.

The cost of the study is being shared equally between Central South Island Fish and Game and Meridian Energy.

“Interestingly, over eighty percent of those fish are from Lake Benmore, with the Twizel River holding the biggest spawning numbers.”

Jayde Couper says the spawning run is a spectacular sight.

“The sockeye are in their bright red breeding colours and are highly visible, often sending up showers of spray as they power through shallow areas looking for a place to lay their eggs,” Jayde Couper says.

“It really is a must see event.”

There are numerous places where the salmon can easily be seen without a long walk - Jayde Couper recommends the Twizel River as one of the most accessible spots.

“Near the town of Twizel, spawning sockeye can be spotted in the Twizel River as they pass under the State Highway 8 Bridge,” he says.

“Over the last few years, the spot has become popular with tourists and locals eager to catch a glimpse of an event unmatched anywhere else outside North America.” 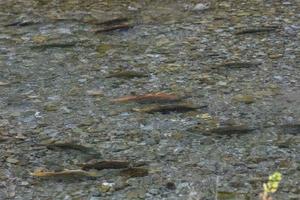 Sockeye salmon can be easily viewed from the State Highway 8 Bridge in Twizel.

The spawning run is all the more remarkable because until relatively recently, sockeye were thought to be practically extinct in New Zealand after being introduced more than a century ago in an unsuccessful attempt to establish a salmon canning industry.

“By the late 1980s, sockeye were thought to have died out, but about 15 years ago, Fish & Game started getting reports of them spawning once again.

“They have bounced back and are now apparently thriving in the Mackenzie Country’s big hydro lakes and even increasing their range.”

Despite the sockeye resurgence, anglers rarely catch them because they feed on plankton and don’t usually take a fishing lure.

Their main value is as a food source for native fish, trout and Chinook salmon helping maintain the productive and popular Mackenzie Country lake fisheries.

While the spawning run is spectacular, Jayde Couper warns people not to disturb the fish.

“It is an offence under the Conservation Act to disturb spawning salmon – you can’t catch, net or spear the fish, or even walk in the river bed and trample their redds, or nests.”

Jayde Couper says this is why the Twizel Bridge site is so popular, as people can watch the fish from above without disturbing them.

You can watch a video of them in the lower Ohau River below: