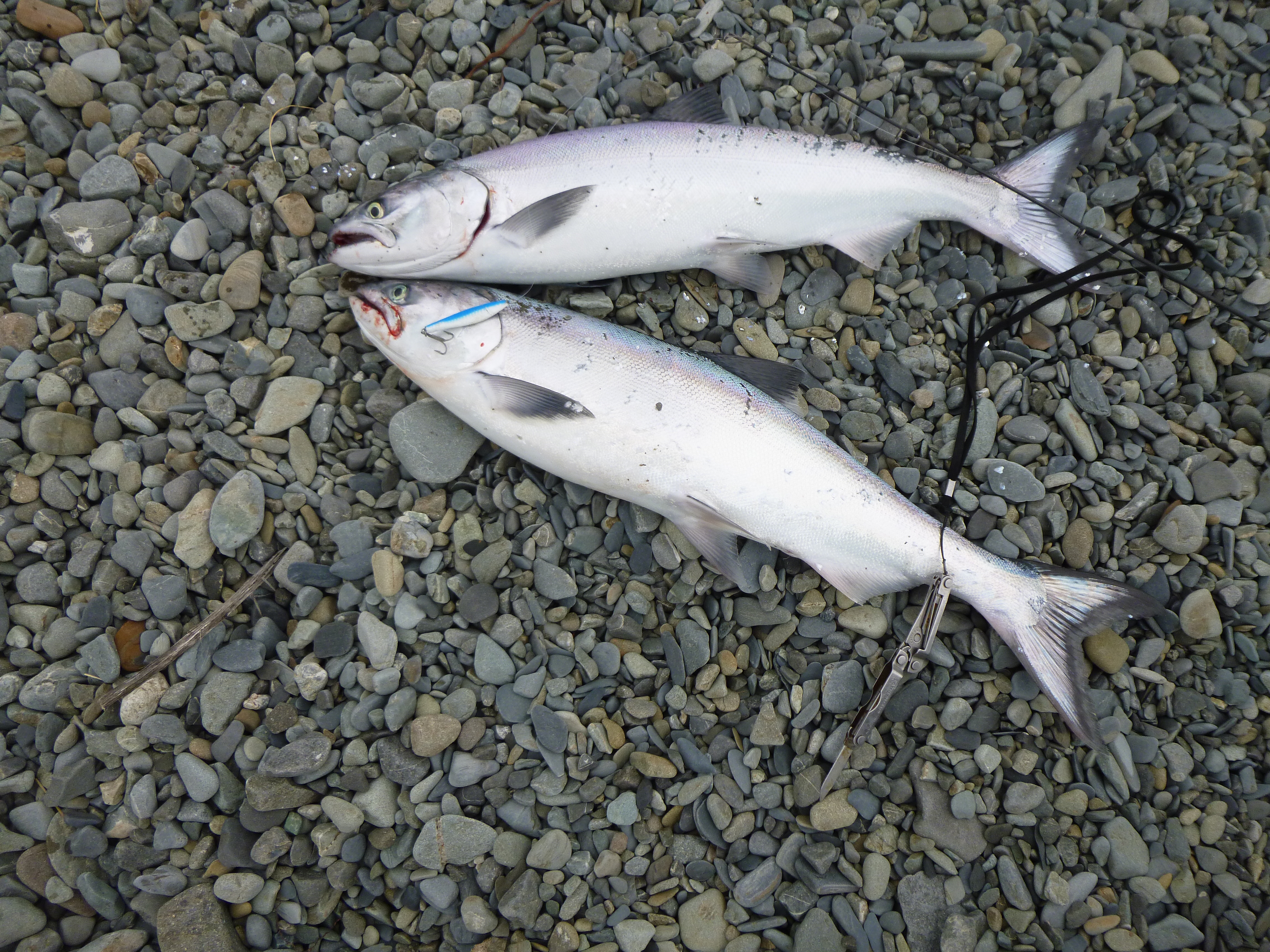 With only some high country lakes open for fishing during the month of May there is not a lot to report on.

Above Right: Two winter salmon from Lake Tekapo, note the blue and white jig that did the damage.

At time of writing anglers seeking canal salmon would have little to enthuse over as there does not appear to have been a significant escape of decent-sized fish for some time now.

I can also report that fishing for trout during the middle of the day has proven challenging due to very clear water conditions.

Anglers prepared to brave icy conditions at dawn and dusk and into the night though are in with a chance of hooking up on some very large trout.

Whilst prime time for egg imitations is normally from August on there have been reports of success on standard glo-bugs in recent days.

Some beautifully marked and conditioned fish have been taken from all the usual haunts.

June marks the beginning of the winter season.

Fishing in lakes around stream mouths can also prove very productive with rainbows congregating to make their spawning run.

Generally speaking though the only lakes open are the big Mackenzie Country ones and tributaries are strictly off limits.

The only exception is the lower part of the Tekapo River up to the power pylons – a distance of about one kilometre.

Conversely, the lower parts of the Ashburton, Rangitata, Opihi and Waitaki are open from June 1 – 31 August.

Searun browns are unpredictable fish at the best of times.

However, the writer has enjoyed some excellent fishing in the lower Opihi close to the tidal limit in some seasons.

The only way to find out if fish are present is to check it out.

There are worse ways to spend a clear, frosty morning than swinging a whitebait imitation or softbait through a riffle.

Some trout and salmon can be found in the big lakes right through winter.

Trolling is still effective but fishing off the shore can also be productive.

I’ve found that both trout and salmon will take a small jig, slice or Tasmanian Devil.

The trick is to use line light enough to get your lure right out to the drop-off and let it sink for some time before retrieving.

Jigs especially are often irresistible to salmon fished this way and are sometimes taken on the drop.

If all else fails why not try a spot of coarse fishing – Centennial Park or Saltwater Creek for example.