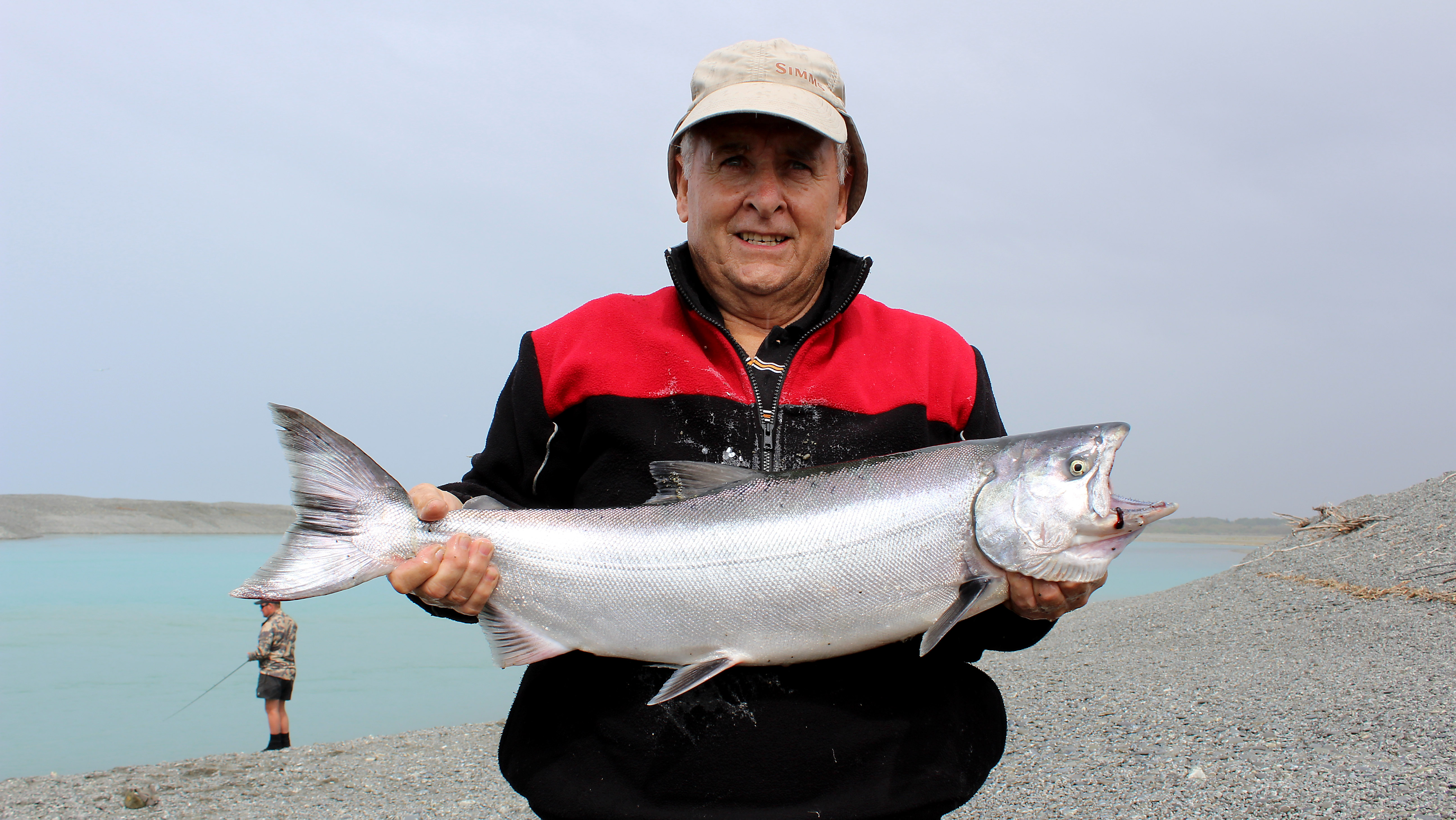 Dear Anglers, since my last report 2 weekends ago there has not been much change climatically.

Traditionally salmon numbers should be there at this time of the year, this season it is quite different to the past as we cant seem to get much respite from warm days creating warm water.

It was interesting to note that on the back of last weeks southerly there was a handful of salmon caught in the lower reaches of the Rakaia.

Above Right: A very happy Rakaia angler Dave Straker with his first salmon of the season, Apologies again Dave for the very unorthodox tailing technique. All I can say is there is more than one way to tail a fish, but I hope I never have to do it that way again!

Salmon and trout will not be very active during the current condition, they are simply keeping as cool as possible, in well oxygenated areas, and have no interest in expending any energy on chasing lures.

Of course there is always an exception to the normal, and we as anglers are very good at making excuses as to why we didn’t have any luck, so what’s another one going to harm!

If salmon are going to be caught during this weekend it will most likely be in the surf, or in the tidal wash area of the river mouths.

If they are there they cant be far away now, their body clock is ticking so be aware it may all happen at once when it does.

As far as river and weather conditions are looking for the weekend its pretty simple, hot and fryable.

Seriously though, river colours should be good at least through until Saturday night.

This may change by Sunday with some heavy rain predicted in the Alps on Saturday.

It seems that most days of late there has been some rain activity inland.

This is why the rivers are holding good colour, if only they would cool down also.

There is not much chance of that this weekend however with 28 – 30 degrees forecast for the next 3 days.

The High Country forecast is not a great one for the fly anglers, Nor-west winds will be reaching gale force at times, those of you prepared to brave the elements may have success by using large dry fly terrestrial patterns such as cicadas.

Watch the ECAN rain fall and river flow sites this weekend, it looks pretty positive that there will be some activity up country.

Look after the little ones!

It has been reported that a number of small sea run brown trout are being caught in the lower Waimak.

This is a good sign for next season a lot of them are smaller than the 300 ml size restriction which means they must be released.

There have not been any issues with this not occurring, however what is being noted is that many of the released fish are being damaged by the treble hooks.

If you are finding this, an option would be to replace the treble with a single hook which will help, or at least minimise the damage.

Another option is to crimp the barb down, as long as a tight line is kept during the play, the fish will be landed, and be able to be released with very little harm.

These little ones you are catching now will be 3 pound fish next season if they are looked after when caught now.

Due to the bio-security issue with unusual red rashes found on trout at the Waimakariri Lakes area, the annual trout enhancement programme was delayed for 8 weeks.

Staff are now taking advantage of any cooler days to transport yearling rainbow trout to the predetermined sites.

Over the past to weeks nearly all the selected High Country Lakes have had rainbow trout released into them.

Staff have noted that some of these lakes are still warm, however there is a difference now compared to earlier in the season, and that is wind.

It is this wave action that helps the situation as it not only keeps the air temperature down a bit, it also aerates the water through wave action.

Most of the Waimakariri lakes which were effected the hardest by the climatic conditions in December are all part of the annual restocking program, due to the lakes having very limited, or in some cases, no natural spawning possibilities.

The initial surveys in early December found that at least half of the stocks had been affected by the rash and blisters caused by the environmental conditions.

Many of the trout may have died from complications coming from the rash.

Because of this North Canterbury Fish and Game Council are currently considering options to enhance these locations further on top of the yearling release program.

They have the ability to replace the lost stocks with two year old trout stocks weighing about one kilogram from stocks held for future fishing events, or situations like these.

This is the fisheries insurance policy that the enhancement programme caters for.

The Council will not undertake this initiative with such valued stocks until they are confident that the water temperatures have lowered to a stable level.

But they would like to assure anglers that we can fix the population damage that has been done and will do so as soon as the weather permits.

It is issues such as the Waimakariri Lakes trout rash that highlights the importance of the enhancement programmes, without this programme in place we would effectively be losing whole fisheries.

Anglers will be notified when the restocking occurs.

After a long period of no releases due to bio-security protocols with the Waimakariri Lakes issue,  the Groynes received its first salmon release two weeks ago.

Around 400 fish were released into three ponds and the fishing was very successful for the following week.

There are still opportunities to be had there as many have not been caught yet but they are getting harder to catch by the day.

Fish early and late in the day when the sun is not on the water is the best time.

Weed has been an issue in the top lake with the jetty closest to the Clearwater golf course so no fish were released into that pond.

Opportunities for juniors anglers under the age of 17 as of the 1st October for catching fish at the Groynes will be good as long as the weather is cool.

Hot sunny days are not good for fishing, the Groynes junior fishery ponds are a great place to teach your children how to cast and there is a very realistic chance that they may catch one.

I advise Mums and Dads to watch this space and get the kids ready because the largest Groynes release in history is going to take place, likely the week after next weather temperatures permitting.

We have no choice at this stage to release as many as we can because we simply can not hold them any longer.

How many fish are going to be released? At least 1500!

Get the kids to go through their tackle boxes and make a shopping list.

Soft baits and spinner type lures such as “veltics” and bait fishing with shrimps or worms are favoured.

Rangers will be frequenting the ponds.

Don’t forget about the Lake Lyndon Family Fishing Day also which is on Sunday 4 March.

Around 500 Rainbow trout will be released on the day for this long awaited event. 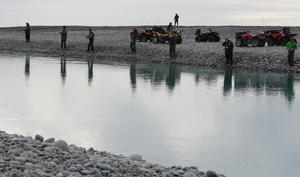 This historic event starts next Friday 23 February if you are considering entering this very social event which gives so much back to the enhancement of our fishery you will need to get in quick.

It's a great weekend and and you don't have to be an experienced salmon angler to enter,  some of the best fish are caught by newbies to the sport.

There is also a fantastic range of prizes on offer for entrants.

Don’t forget to keep an eye out for any fin clipped salmon that will be making their way into our rivers soon.

If you do happen to catch a fin clipped fish, make a note of that, and have your information available for the annual phone survey which is carried out at the end of the season.

This information is important to assessing how well the enhancement programs releases did and may help us to decide how best results are achieved.

Hatchery staff are already juggling stocks and flows attempting to hold oxygen levels in an effort to avoid having to release  non marked smolt which are smaller than recommended, and not monitorable in our fishery.

Part Two of the Annual Chinook Salmon Smolt fin clipping program will take place at the Montrose hatchery at 8.30am  Saturday the 17th of February and will involve two days with a good team finishing on Sunday.

These smolt stocks are destined for release into Silver Stream, Otukaikino, Rakaia, Coleridge, Kaikoura, Clarence rivers, and the West Coast in July.

So invite your friends and children to enjoy the camaraderie of anglers on this social and educational outing.

So please rally any help you can to make it happen, many hands make light work so numbers of around 60 each day will make it easy, and clippers will also be able to finish early on the days.

Typically with good numbers about an hour after lunch will see the job done.

The entrance to the property is 6 kms up the road from the turn off and will be marked with an angler access sign on the days.

This is a big one guys, we cant do it without your help!

A brief presentation to enlighten North Canterbury anglers and their tireless teams of  Salmonid Culturists, regarding our enhancement programs progress, and the current national review which is questioning the viability of the 150 years of dedicated work our anglers, our forefathers, have put into creating and enhancing our fishery, will also feature on the days.

A strong show of numbers is needed on this weekend so please spread the word far and wide.