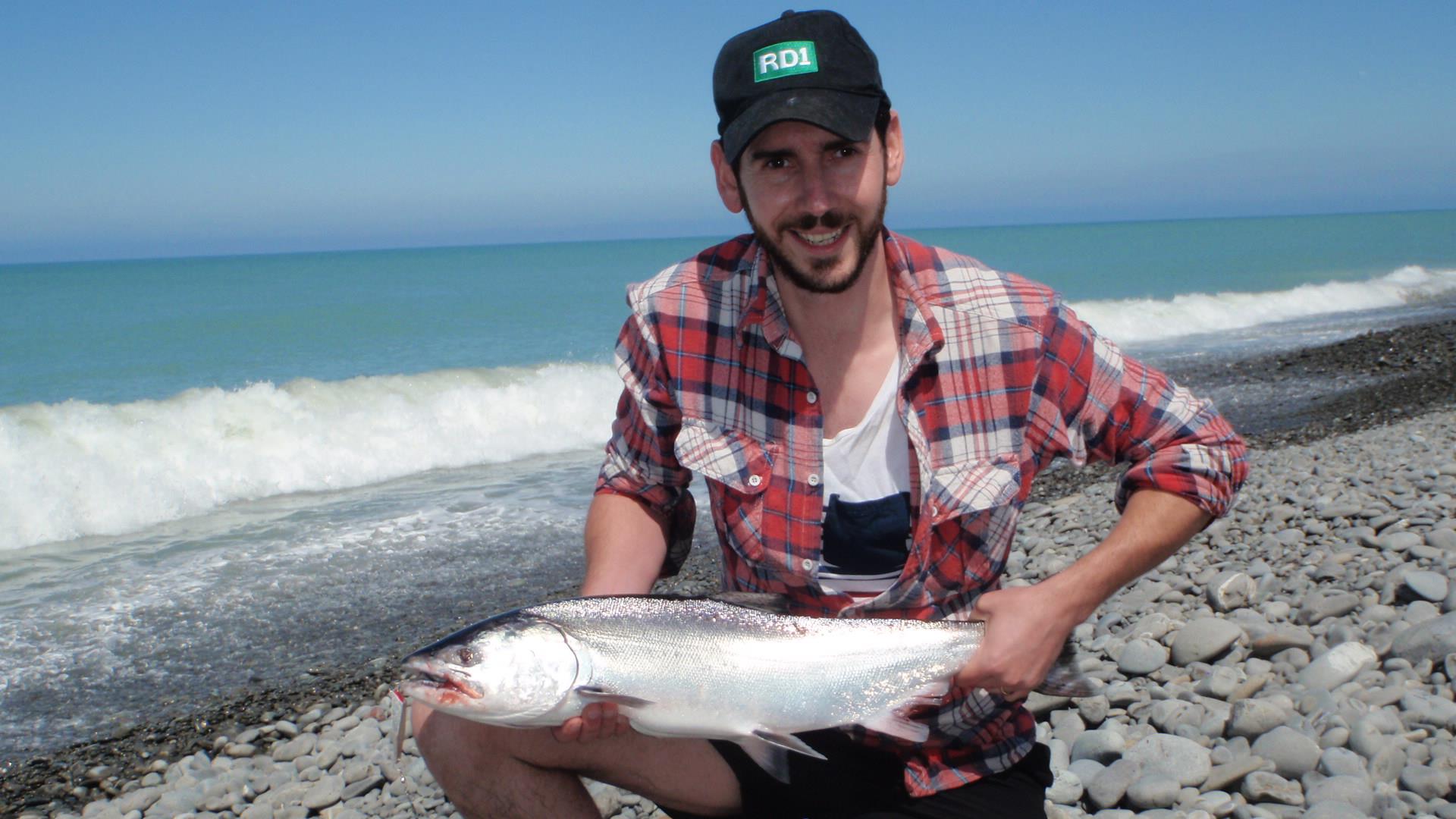 This weekends weather is looking quite dull in the low land band with drizzle from the SE on Saturday, and the same from the NE on Sunday.

These conditions maybe favourable for those trying to catch a salmon, as the rivers are very low and clear at present.

Those looking to fish inland will find Saturday the best for fishing conditions.

Above Right: A first salmon ever for this angler on the Rakaia river in March.

Sundays high country forecast is predicting strong NW winds with the chance of rain spreading to the East.

Currently the Waimakariri river is flowing at 37 cumics and the Rakaia river is fluctuating, with the Lake Coleridge power station generation, between about 100 and 118 cumics.

Although heavy rain is not forecast until Sunday in the headwaters, anglers are advised to be aware that there maybe rising rivers during the day. Check the ECAN river flow and rainfall sites for current information.

The Waimakariri, Hurunui, Waiau and Rakaia rivers all have salmon throughout them now.

The Waimakariri is showing the best angling results at present due to good numbers of fin clipped Hatchery salmon congregating in the lower reaches and getting ready to make their run home.

Salmon are often reluctant to run in low clear river conditions, and often come into the river on each run off tide, and then go back out to sea when they decide conditions are not ideal for them.

Left: A very happy angler, Paul Sumner from the North Island had a great Southern salmon fishing trip landing two salmon from the Rakaia in February.

Many of these have been caught over the past 10 days.

Salmon are nearing spawn time now, and the time will come soon that they will need to make their run home regardless of river conditions.

All of the main four salmon rivers are well worth fishing this weekend.

Encouraging numbers have been evident in the lower reaches of the Rakaia and Waimakariri rivers over the past 2 weeks which is very pleasing to see after the slow start to the season.

For Anglers looking to stretch a fly line or spin fish in low country streams this weekend, rivers such as the upper Ashley, or the upper Selwyn still offer some good sport.

High country conditions are not ideal this weekend but we have certainly seen worse this season.

Saturday is worthy a look for sure.

Sunday will be affected by Nor West winds. Lake fishing usually provides some wind sheltered areas which will be a good option.

What’s on the Agenda for Fish & Game at present.

Staff are getting ready for salmon spawn counts, and waiting for the hatchery salmon to enter the traps.

This is always a busy time for staff, and the dedicated army of volunteers. 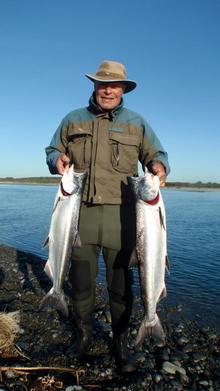 Right:Dave Lee with a limit bag from the Rakaia this season, two very nice fish with the largest weighing 15 pound.

No salmon have turned up in the traps at this point of time.

This is normal for Montrose as they arrive very late in the season, but it is not normal for Silver Stream.

Hopefully the low clear river conditions are the reason for this, and there will be a late migration the next time the rivers rise.

Last seasons salmon smolt are doing well and are due for release in July.

Thanks to the huge support shown by volunteers fin clipping this season, all of the stocks have been fin clipped.

It is important to note that only half of the releases have been fin clipped the past 2 seasons due to forced early releases as a result of low oxygen levels at the Montrose hatchery.

This means that in relation to this seasons returns, for every fin clipped salmon caught, there is another one caught that is not marked.

Currently 150,000 smolt are being grown at Montrose for releases at various NC rivers including the Hurunui, Waimak, and Rakaia rivers, in July.

There are also another 50,000 smolt being grown at the new Whiskey Creek site and a further 30,000 smolt down at Bully Creek in the lower Rakaia.

This is a huge increase of smolt releases for the salmon enhancement program.

All of these stocks will be released around July 2017.

It is very important to recognise that this increase of production at the Hatchery has only been made possible by the massive personal input, of hundreds of volunteers, whom have helped out in someway at the hatchery this season.

Thanks to all of you whom have given so much time to the enhancement of our salmon and trout fishery this season!

The month of April is an exceptionally busy one as angling related topics are still very high on staff priorities lists, and at the same time the Gamebird season is also near.

North Canterbury Fish and Game are getting very close now to a move in date at our new base at 595 Johns Road.

Building stages are progressing well and the word is that we may be in the new headquarters around mid May.

Note the adipoise fin has been clipped as a smolt about 2 years prior.

This method of marking fish not only helps Fish and Game staff to monitor fisheries population abundance, but also provides anglers with additional harvest opportunities as 50% of the adults are caught annually.

As only 50% of smolt releases in 2014 and 15 were fin clipped, for every 1 fin clipped salmon caught in the Rakaia and Waimak this season, there is another caught which is non clipped, or marked.

These figures are taken into account when the annual angler harvest phone survey is undertaken in May.

1100 anglers are randomly selected for this survey annually. and this data is correlated with headwater spawn counts, and hatchery trap returns, which provides Fish and Game with valuable populations data.

A significant release of 600 2kg salmon took place at the Groynes 2 weeks ago.

Some great fishing has been had by our junior anglers but we haven’t finished yet!

Just prior to next weekend the final release of the season will see around 220 salmon released into the the No 1 pond nearest Clearwater.

Watch for details in next weeks fishing report. Soft baits and bait fishing with worms should work well.

Remember the Groynes ponds are strictly reserved as Junior Fishery.

Adult licence holders may not fish there under any circumstances.

An Important Notice to Anglers

If you are driving a vehicle into areas like riverbed environments which have long dry grass around them, it is a real possibility that the heat for your exhaust pipe may cause a fire to start.

Spark arresters are a simple addition to vehicles and they basically just slip over the end and are attached by a hose clamp.

This is something that all off road drivers should consider.

4x4 kit out, and accessories retailers will be able to advise you of what’s needed.