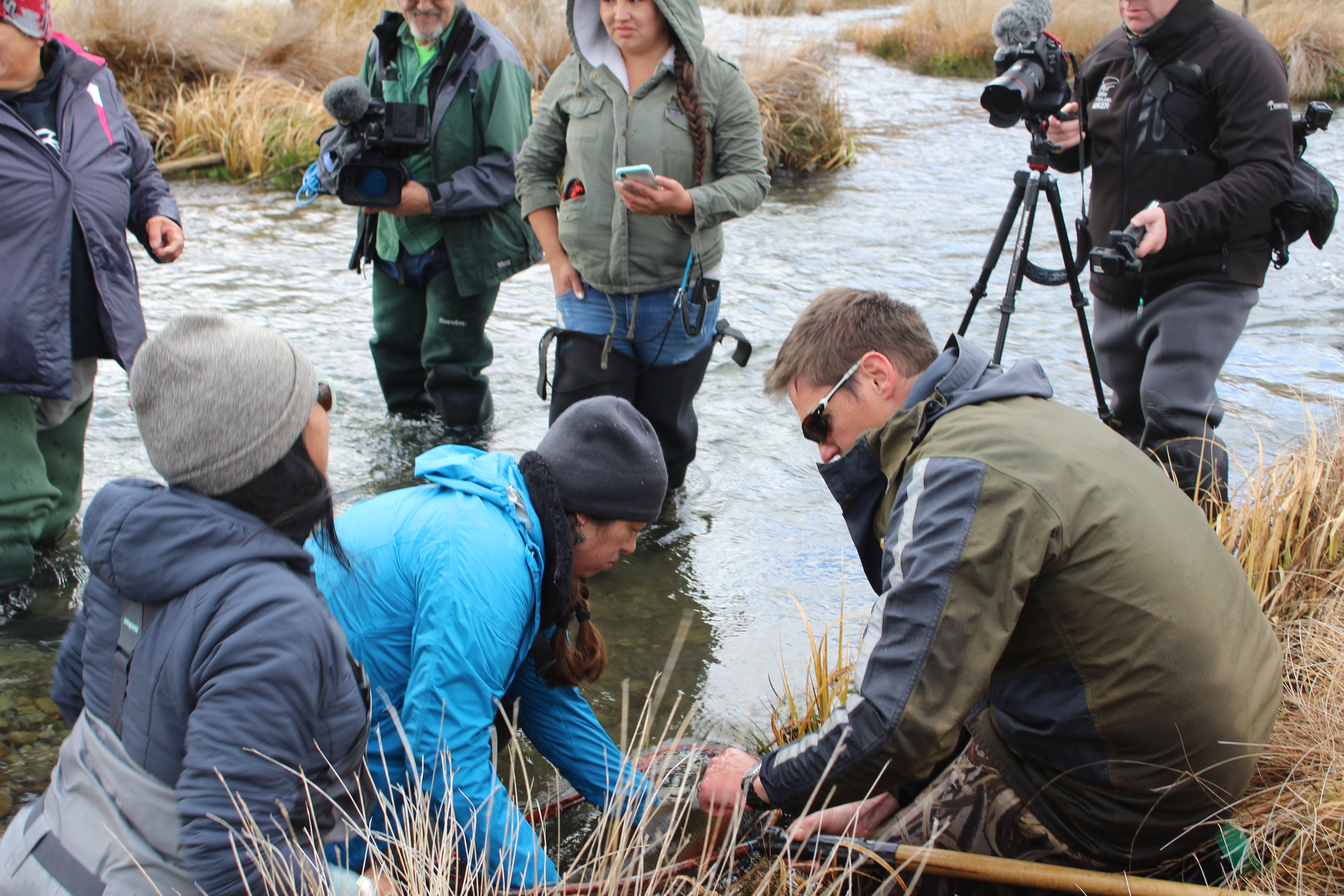 Dear Anglers, the weather forecast for this weekend in the High Country is looking better than the Lowland coastal region.

On the back of the current Southerly airstream, wind strength in the inland parts of the region will settle quicker than the lowland.

A lingering Southerly flow is expected to continue for the most part of the weekend.

At the time of writing it is raining heavily. How much this will affect low land and even inland streams is only guess work.

It will be important to check ECAN river flows, up to date weather forecasts, and road snow conditions inland this weekend if venturing out for a fish.

Most of the main snow fed rivers have lifted in flow levels over the past 24 hours but not majorly.

The Rakaia for example has risen from around 80 cumecs to about 110.

This should drop down again quickly if Friday’s southerly rain does not have too much effect after writing.

Keep in mind that snow is forecast in the High Country today.

When this thaws, it should keep colour in the main stem rivers for a few days.

This can be a good thing for those targeting sea run trout.

Although there are many high-country rivers and streams which are currently closed for fishing until the first Saturday in November, and in some areas the 1st of December for rivers that flow into high Country lakes, there are still many areas that are open from October 1st.

These are typically snow fed larger rivers that do not flow into high country lakes.

For example, the Waiau, Hurunui below Lake Sumner, Ashley and Waimakariri, rivers (excluding the Broken River system and its tributaries) the Poulter, Rakaia, and all its tributaries, including the Wilberforce river is also open.

No rivers that flow into any High-Country Lakes, such as Lakes Sumner and Coleridge are open until the 1st December.

Other areas open for fishing include all low land rivers in the Eastern Zone. Lakes Forsyth and Ellesmere, and their tributaries are also open as of October 1st.

There are many open for fishing locations at present in our region.

Anglers are reminded that a thorough read of the regulation’s booklet is important before choosing a destination to fish.

Please if you do witness any of this going on contact us immediately. We will have rangers there asap!

Check the ECAN River Flows, and the Met Service Websites for the latest information on flow changes and rainfall before heading out for a fish.

It is still quite early days for sea run trout fishing, although prospects are good for catching resident trout.

All the low land streams will offer opportunities, especially in the evenings, and into the dark in the Ellesmere tributaries.

Sea run trout prospects in the main snow fed rivers are best when the river is slightly dis-coloured.

As the river clears they tend to be more active feeders on dusk, and into the night.

This can offer very exciting fishing. They will be especially active if there are smelt present.

The Ashley and the Selwyn can provide good sport, and our local Christchurch streams.

There is some great action to be had in streams such as the Otukaikino, Styx, Silver Stream and Cust Rivers with light tackle.

Lake Forsyth/Waiwera has continued to produce good numbers of trout and perch for anglers.

This lake is an all year round fishery and it has fished well throughout the winter, and has continued to do so to date.

This is an easy place to access and not being to far from Christchurch, has become a very popular destination, with high chances of success for all.

What’s been happening so far

North Canterbury Rangers were out in full force on opening day, and met up with many successful anglers.

Some very respectable trout were amongst the angler catches witnessed with trout weighing up to 8 and 9 pounds.

The Ellesemere tributaries are producing some of the nicest fish so far.

There have been catches of sea run trout in main snow fed rivers around the tidal reaches but not a lot at this stage.

Usually these fisheries pick up substantially around the end of October.

The Kaikoura coast has produced a good number of salmon from the surf over the past 2 weeks.

Although not in our region this region has supported this fishery by releasing stocks into the Lyell Creek near the township.

This is the area that salmon are being caught, as salmon are a schooling fish, there will be a mix of fish here, many of them will be destined for other rivers in our region and are simply using this area as feeding grounds.

The numbers caught to date are encouraging for our salmon rivers. They may be coming to a river near you soon!

The Groynes Junior Fishery Ponds are

There is a blanket fishing licence for all juniors on the TAKF day, 820 Rainbow Trout including some massive ones will be in the ponds for juniors to catch on the day.

When a kid hooks one of these 20 big rainbows it will be kaos!

Remember that after the day a fishing licence is required for all children regardless of age and it is a 100% Junior Fishery. Junior Licences are available at all major tackle stores, or North Canterbury Fish and Game, 595 Johns Road Belfast.

The Lake Coleridge annual competition is on this year and similar conditions in all aspects of it are assured.

There will be a full report on all the details of this historic North Canterbury angling event during the next weekly fishing reports.

During the Winter months North Canterbury and Central South Island Fish and Game have been working together on a project for the Native American Indian tribe, the Winnemem Wintu.

This project involves searching for Chinook Salmon which maybe spawning in the Winter in an effort to identify Winter run genetics.

There are 3 different runs of Chinook around the world, Spring, Fall and Winter.

When the Chinook were first gifted to NZ it was unsure as to which of the three they were.

Adaptation to the opposite time of the year from Sacramento to the South Island of New Zealand also confuses the identification.

Although we know which catchment in California and which ship they arrived on, the hatchersourse of the ova in regards to which of the 3 runs is not certain.

Even over 100 years ago fish culturists were very skilled at retarding ova maturity by using massive blocks of ice filtering through the ova in order to slow hatching time down.

In the case of the Winnemem people their Chinook Salmon runs were severed by the construction of the Shasta dam on the Mcloud river, a tributary of the Sacramento in the 50s.

The McCloud river was the ancestorial home of the Winnemem tribe, until they were forced of it by the government of the time, in order to build the dam and flood the area with the newly formed Lake Shasta.

Fifty years prior to the dam ova was sent to 13 countries around the world from the Baird hatchery on the McCloud.

Only one country, New Zealand, succeeded in acclimatising the Chinook.

It was as recent as only 10 years ago that the Winnemem tribe learned that the ancestors of their McCloud Chinook were successfully established in NZ.

There are still Chinook runs in the lower Sacramento river, but the Winnemem people want their Chinook back, the ones that inhabited the McCloud, the furtherest spawning grounds from the sea in the Sacramento.

They believe that they are connected to these Chinook, the ones from their river the McCloud.

After years of scientists messing around with the lower Sacramento Chinook runs in order to satisfy commercial gain, the Winnemem people believe that these lower catchment Chinook are inferior to the Chinook of NZ which have had no more introduced imports since the original shipments.

The current genetic sampling project here has come about due to a critically endangered classification of Winter run Chinook in California.

What this classification means is that substantial government funding becomes available in order to research and protect the Winter run Chinook.

The Winnemem people do not really care which of the 3 runs are re introduced to the McCloud as they had all three runs prior to the construction of the dam.

They just want their fish back! The current funding allocation however stipulates that research funding is only available for Winter run.

So time frames of sample collection here has been strictly identified by the California fisheries agencies.

Of note in California is that Spring run Chinook are also on the verge of being classified Critically Endangered.

At this point of time our role is to hunt for Winter run genetics.

CSI and NC Fish and Game have been giving it all we have in order to find as many samples as possible in the hope that we find Winter run Chinook for the Winnemem people.

We simply want to repay the gift of Chinook back to the people and their river of origin the McCloud.

In the event that Chinook stocks from NZ are re introduced back to the McCloud, millions of dollars have been committed to creating a diversion around Lake Shasta for the downstream migration of smolts and the returning adults.

Due to low population numbers here in NZ at present, only a few fish would be harvested of ova and then on grown in captivity, to provide viable ova numbers before exporting back to California.

To date the project teams have found over 100 fish spawning in the Winter and collected fin snip samples from all of them.

These fish are fish that are mostly not accounted for in our own regional spawn counts as they are outside of that time frame.

The latest sample found was on the 3rd of September.

They have been exported back to CA for analysis, the results of the DNA tests have not been processed at this stage so we are all still crossing fingers.

Part two of this project for the collection of samples is that we are required to gather fin snips from Chinook which inhabit three lakes in our regions: Lake Heron, Coleridge and Sumner.

The first three weeks of the High Country opening will be targeted for collection with the source being angler harvest.

Just a small snip from the pectoral fin is required. We are asking anglers to support this project by helping out with this, so if you are met by the team your support would be much appreciated.