Writing this more than a week out from Opening Day and trying to predict what conditions will be like on the big day is somewhat akin to crystal ball gazing.

What we do know though is that this region has experienced extremely low rainfall from the end of the 2017-18 season.When I see my wife watering the garden on a regular basis right through September, little alarm bells begin to sound in the grey matter.It is dry and looking ahead there seems to be scant relief prior to October 1.

I am often asked for my opinion on likely fishing locations for the early part of the season. Based on reports from a number of angler friends and my own observations I’m going to stick my neck out and suggest that the lower parts of the larger rivers in the region would be well worth a look.While whitebaiting on the lower Opihi earlier today, right on daylight I spotted a number of tell-tale splashes at the top of the gut; clearly trout feeding on whitebait and smelt.One angler I spoke to enjoyed a great winter season a little further up the same river. Sof tbaits were all the go for him, especially at change of light. Another angler reported spotting a shoal of hundreds of good-sized trout in the same area during August.

While some of the smaller streams may be just a little too ‘bony’ for optimum angling, the fact that they've had a long break from angling could still make them viable.For that reason fly fishers may do well to check out the little Tenawai, Pareora and Waihao, especially if the rain forecast for this weekend turns into more than just ‘Scotch mist’ again.

One river in the Central South Island region that rarely rates a mention is the Ashburton.This frequently overlooked stream has enjoyed very good flows all winter and has a reputation for some very good early season sea-run fishing.

But my pick of the rivers has to be the mighty Waitaki where the early season fishing in recent years has been nothing short of spectacular.While a jetboat is a decided advantage, there are still plenty of opportunities for land-based anglers too.

Lower flows in the Rangitata also equate to fish stacking up in stable sections of river. While browns are most likely to be encountered, the writer has caught rainbows in the Peel Forest area and above. The spectacular scenery alone makes for a memorable day out.

Lake Opuha has plenty of water this year and should fish really well. Boat-based anglers typically do well on Opening Weekend but stalking the edges with a damselfly or lightly weighted pheasant tail nymph gets results. Many Timaru anglers would not fish anywhere else on Opening Day. 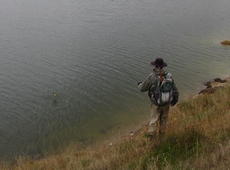 A brown takes to the air on Lake Opuha.

If this doesn’t provide enough food for thought remember that the hydro canals and lakes are open all year round. Above all get out there and enjoy the huge range of opportunities that the Central South Island region offers.