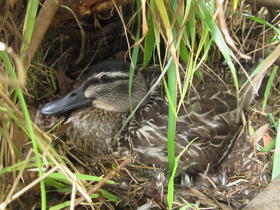 Despite being in New Zealand for 150 years, little is known about mallard ducks. That’s why Fish & Game embarked on a three-year research project to increase our understanding of the country’s number one game bird.

The Fish & Game-funded project focused on two teams of field workers, one in Waikato, the other in the South Island. They fitted 60 females at each location with transmitters so the ducks could be monitored over the breeding season.

Well, after many long days tracking ducks and collecting the data, the grunt work of sitting in front of a computer and running statistics programmes is well underway. However, there is no silver bullet equation to answer the questions, and before we can begin to analyse productivity and population growth, we first need to fully understand the survival rates of nests, ducklings and females.

For the past three months, I’ve been analysing the nesting ecology, survival and nest habitat selection of mallard ducks. The results are exciting, and not only are we reporting some things that have never been fully recorded until now, we are discovering new information about mallards in this country.

Following are just a few facts that we’ve reported and are in the process of publishing in scientific journals. 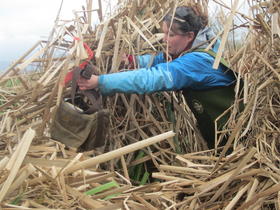 In our study, the nesting period (time from when birds lay and egg to hatch) was 134 days and occurred from July 15 to November 28. This may be the longest reported nesting period of any duck in the world.

Birds select nest sites in dense vegetation. They tend to prefer nesting along ditches, but their nests are most successful when they’re located along roadsides, hedgerows, tree rows or other ‘linear habitats’ comprised of a mixture of trees, shrubs and grasses.

If you want to learn more about nesting ecology, nest habitat selection, or nest survival, check out the latest update on the Fish & Game website (www.fishandgame.org.nz) or contact your local Fish & Game office and request a copy of the Technical Report on Nesting Ecology.

Now that we fully understand nesting ecology and survival, my analysis will focus on understanding the factors that affect duckling and female survival. When that’s finally complete, I’ll be on the home stretch and the answer to the ‘key questions’ mentioned above will only be a few mouse-clicks away.

But until we’ve fully finalised the results and provided management recommendations, remember to ‘go for green’ and don’t mow in the spring!